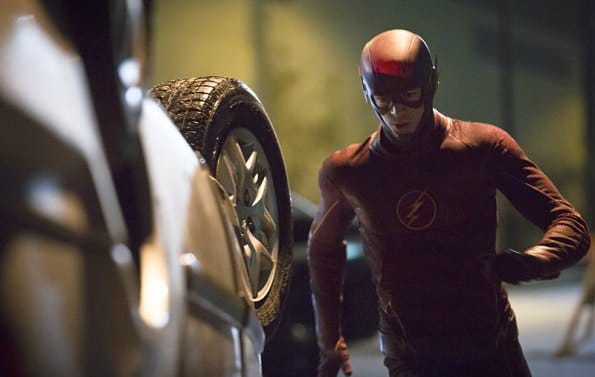 As a lead-in to Valentine’s Day, Tuesday night’s The Flash took a very romantic turn that is altogether delightful. Plus, I think for some fans, a new “ship” fandom (one without a name) was born.

Following the high of saving a couple in a flipped and ready to explode car, Barry and his team gather at (where else) S.T.A.R Labs. Cisco invites his co-workers out for a drink without any takers (its movie night with Joe for Barry and Caitlin declines on the grounds she has no social life). Cisco tells Caitlin he’s still looking for Ronnie; she tells him to stop. She’s ready to move on from Ronnie. But as Cisco so wisely points out, in order to do this, she has to actually move on.

Fast-forward to later on, and Cisco, feeling brave apparently, confronts Hartley. Granted, there is a certain amount of safety in this considering Hartley is buried behind a thick wall of glass, but come on. Who is going to trust that when dealing with super humans? Hartley tells Cisco in order to find out about Ronnie, he has to show Cisco what he knows (did anyone buy this?), and also that he knows why Professor Stein was in the building the night of the particle explosion. Desperate to know where Ronnie is, Cisco allows Hartley access to the outside of the building, but not without taking precautions. Hartley does have ulterior motives and makes a run for it after exchanging fisticuffs with Cisco. He manages to best Cisco – temporarily. Cisco’s gadget ensures Hartley doesn’t escape custody.

But wait. That’s not how this story ends!

Falling prey to Hartley’s request, Cisco takes him to a lab with security footage of the night the accelerator exploded. The footage shows that Dr. Stein’s work to merge two beings was successful. Ronnie and Stein appear to be the same person merged into one – which means this explains why Ronnie hasn’t been himself. With his end of the deal upheld, Hartley jumps Cisco and escapes custody. The following day (after a particularly trying night for Caitlin – more on this later), Cisco confesses everything to Caitlin and Barry. He tells them that Hartley escaped because he was looking into how he can find Ronnie. Caitlin tells him she asked him not to, and the truth finally comes out. Cisco wasn’t doing this for Caitlin, he’s doing it for himself, looking for some kind of redemption from his act of locking Ronnie into the tunnel. Caitlin offers nothing but understanding and for now, it would seem the three have no secrets.

Meanwhile, Barry is being kept busy with the arrival of a new meta-human. This time, there’s been a prison break. A convict named Parker escapes custody along with the help of his teleporter girlfriend. Or that’s what the particles she leaves behind seem to suggest. Barry and Joe work the case with a surprise visit from Barry’s dad Henry, while the two visit the prison to collect evidence. It would seem Henry was an inmate of Parker’s. Thanks to a quick I.D. from Cisco’s super computer, they learn through the CPD database that the girlfriend’s name is Shawna, whom Caitlin dubs “Peek-A-Boo.” This sends everyone in separate directions as Joe and Barry continue investigating through their police force contacts while the scientists follow the particles. 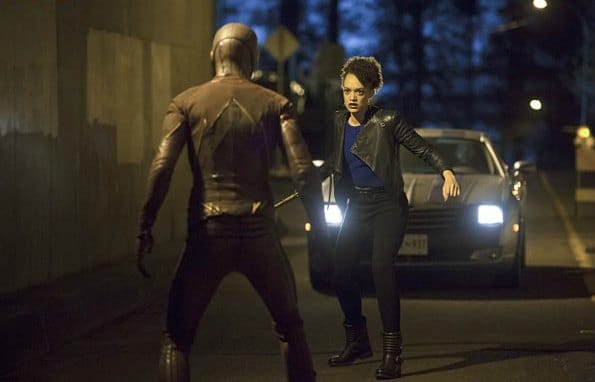 Barry’s dad discovers that Carter was a “runner” for a powerful drug kingpin. It would seem Parker has a debt to pay. Later, Wells diagnoses Shawna’s weakness: she cannot teleport if she doesn’t have sufficient light. This allows Barry’s second run-in with her (the first during a bank truck hold up went south quickly with a bullet nearly striking Barry in the neck) to end in a successful capture, and she, along with the rest of their meta-human prisoners, is placed in a secure cell.

Love is in the Air

On the friendship, unrequited love front, things are heating up. Iris and Barry have coffee as she confides in Barry about the flash. She wants to be more than “the Flash PR flack,” she says. So best friend that he is, Barry wants to find a way to help her. Cue the cute moment alert: Barry and Caitlin talk about their lack of a social life. Barry says Caitlin has none and his consists of, “running at super human speed and Netflix.”

Caitlin feels it’s pathetic to pine for someone who bursts into flames and wants nothing to do with her. Barry realizes that he cannot always try and catch Iris every time she falls. She has Eddie now. This prompts him to call Caitlin and ask her to scope out the bars in the hope of finding their meta-human and Carter. While there, Caitlin gets drunk, the two sing karaoke… and oh my, Barry meets a girl. Then Barry takes Caitlin home and we see a completely different side to the normally buttoned-up doctor. She cannot seem to get out of her sequined dress which means Barry uses his super speed to get her in pajamas. 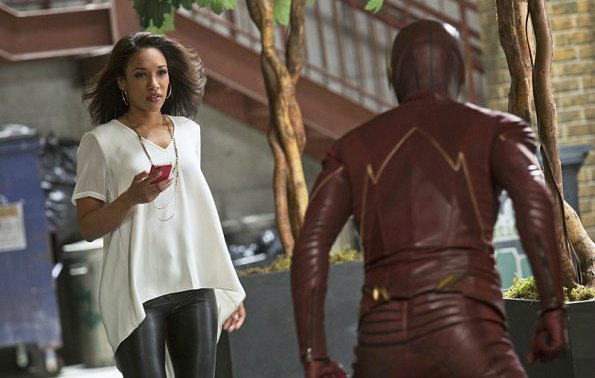 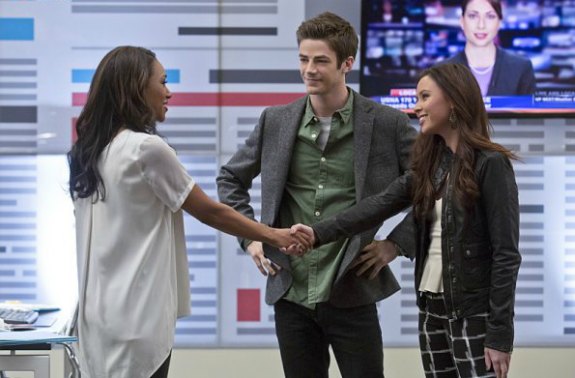 After the Flash meets up with Iris, where he hands her a story about the prison break (which is Barry’s way of helping Iris break free of being used for Flash sightings), Iris snaps a picture. The first to ever be printed in the paper. Following this, he comes to her workplace. Delighted to see him, Barry admits that he didn’t come to see his best friend. No, he has a lunch date: enter Linda Park, a sports reporter who just so happens to be Iris’ co-worker.

Barry and his Father

After investigating the prison break, Barry gets a call that his father has been stabbed. Rushing to his side, Barry is able to visit with his father in the prison hospital and the two share a really nice moment. Having seen the paper with the Flash’s picture plastered on the front page, Henry hints at knowing it’s his son who is the Flash. Barry denies it saying he’d tell his father if he were. Henry replies with this, “Yeah. Well if The Flash were my son, I’d tell him a few things. First off, I’d tell him it’s a dangerous world so be careful. Then I’d tell him he’s a hero and he’s saving a lot of lives, but the most important thing for him to know, I feel, is that his father’s proud of him.”

Like I said, it was a good moment for the father and son.

Before the episode closes, someone (new?) is terrorizing city workers in the underground tunnels.

When bringing Caitlin home post-karaoke bar, the two exchanged these words in regards to Barry getting Caitlin dressed for bed. 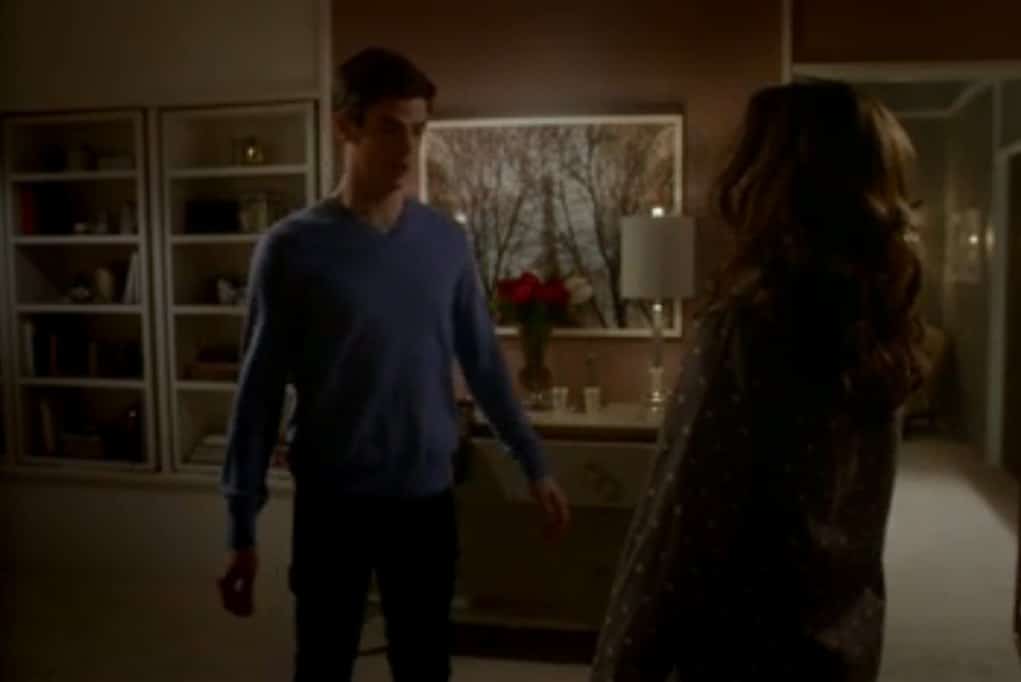 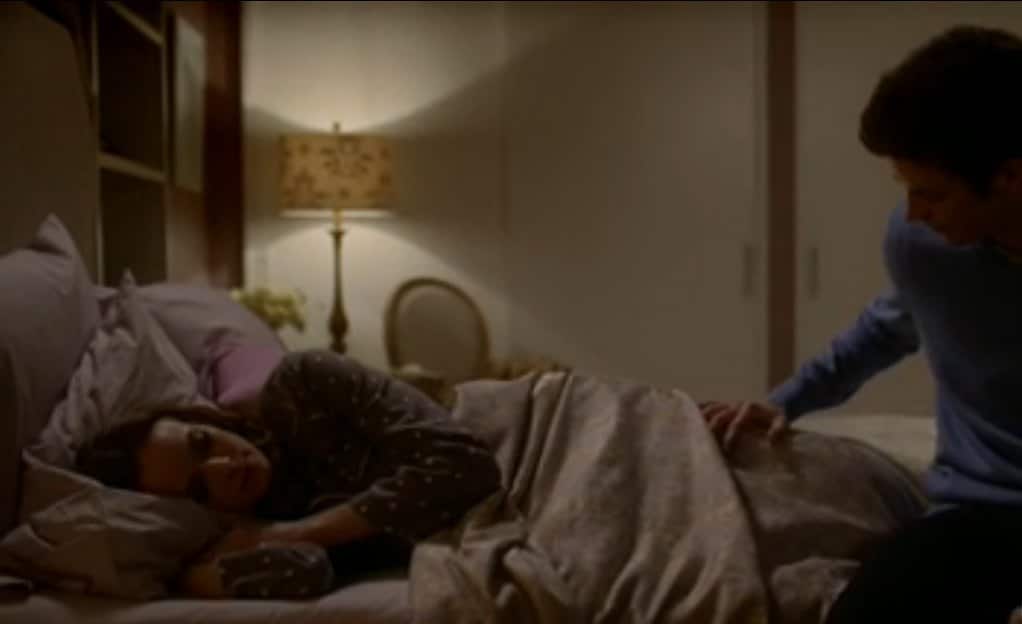 Caitlin: “There you go again, saving me from that evil dress. …Did you sneak a peek at my goods?”
Barry: “I wouldn’t be much of a hero if I did.”
Caitlin: “Yeah, but it’s okay if you peeked a little. You deserve a peek for all the good stuff you do.”

Any theories you have, bounce them off down below in the comments! How do you think Ronnie’s story will end? What’d you think of Linda’s introduction? I know her character likely won’t last, but it’s refreshing to take a step back from the Iris/Barry will-they-or-won’t-they and the little I saw of her, I liked the potential for Linda.

Our romance-themed entertainment site is on a mission to help you find the best period dramas, romance movies, TV shows, and books. Other topics include Jane Austen, Classic Hollywood, TV Couples, Fairy Tales, Romantic Living, Romanticism, and more. We’re damsels not in distress fighting for the all-new optimistic Romantic Revolution. Join us and subscribe. For more information, see our About, Old-Fashioned Romance 101, Modern Romanticism 101, and Romantic Living 101.
Pin this article to read later! And make sure to follow us on Pinterest.
By Rissi JC on February 6th, 2015

4 thoughts on “The Flash Recap: Crazy for You – Barry and Caitlin, Barry’s Father and Hartley’s Escape”