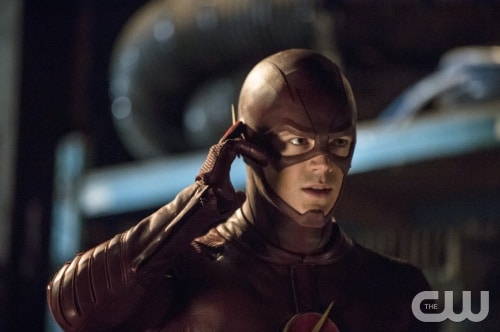 The Flash is Born

Following the “previously” brief recap of last week’s episode, this week’s episode “The Flash is Born,” is again interesting though not nearly as emotionally investing as last week’s meta-human story was. In all truth, aside from the tie-into the episode title (Barry earning his name), it really was more typical than extraordinary. Even with the blast from the past – and a different kind of introduction to Barry’s life post his mother’s murder, there wasn’t the same kind of punch in this episode. 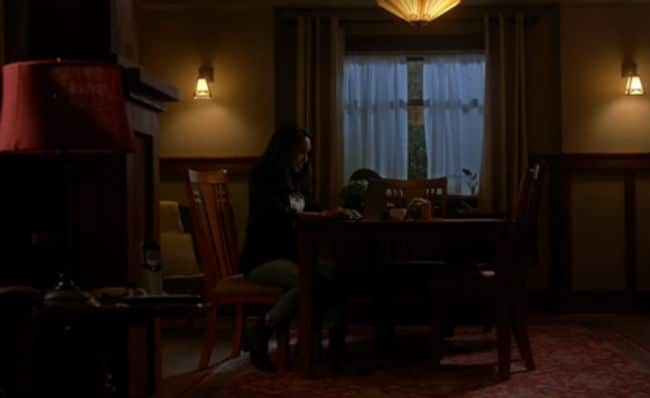 We open with a voiceover from Iris as the camera finds her typing another blog post while she asks us (or more accurately the people of Central City) to believe in the “impossible,” thanking the hero she calls “the streak” for giving the people someone to champion. This prompts The Flash to again appear (you may remember Barry suggested the two spend some time apart at the end of last week’s episode), pleading with her to give up her pursuit of blogging. Instead, she peppers him with questions; she wants to know his hobbies, favorite color (red, duh!). Later on, she becomes fascinated with finding more meta-humans (though Iris doesn’t know that’s what these people have been dubbed); she shares about reports of a man on fire who doesn’t burn. 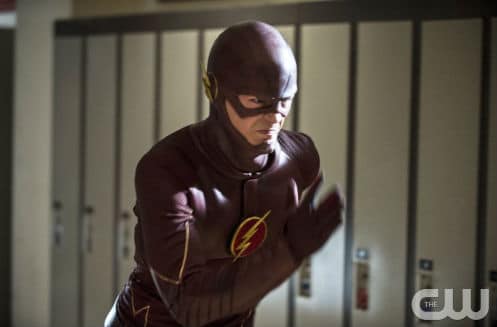 Before The Flash can convince Iris to drop her crusade, he is called away (this is going to be a habit, I’m thinking) and this day he comes up against “a steel-plated sociopath” and for his trouble, he also gets royally beat up by the dude which brings Barry back to Star labs and into the care of Caitlin – he set a record of fracture numbers and because of that he takes a few hours to heal rather than minutes.

At the police station, the detectives identify their bad guy as Tony Woodward something that triggers a memory in Barry. Tony was his school nemesis and regular tormentor following the scandal that was Barry’s father’s arrest. The same sonic event that changed Barry also changed Tony. Knowing what they’re up against – a man made of steel, Cisco invents a training machine that he calls “girder” meant to help Barry prepare for what’s to come and to be able to beat Tony – with his speed. Only this meta-human might not be Barry’s most immediate problem.

Eddie and Barry (say what!?) working together

Eddie saw something unexplainable on this case – a man who was indestructible as bullets struck him in the face, and he has questions. Unfortunately for Barry, Joe has a case of his own he wants to pursue (unbeknownst to Barry, it involves his mother… but more on that later) and so Barry is nominated to partner up with Eddie. Can we say awkward? I think so. Surprisingly, I actually didn’t mind their scenes together. Eddie may not be my most favorite character (and sometimes to be honest, Iris isn’t) but their “bromance bonding” is amusing in some instances particularly when they begin boxing together – it’s funny to hear Eddie give Barry a compliment about his skills, but they still need to work on Barry’s “speed.” Also, cliché or not it’s Eddie who in his own “perfect guy” way begins to heal the rift between Iris and Barry because friends are “important.” 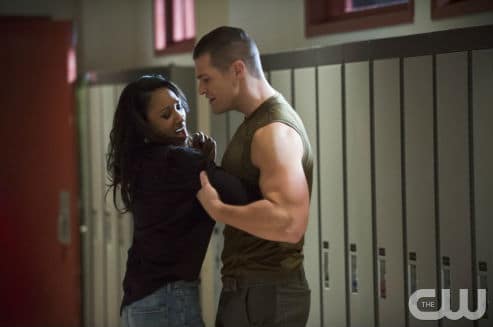 Meanwhile, back at Iris’s café, Tony appears and threatens her. Since the three of them (Barry, Iris and Tony) went to school together, Tony knows Iris and having read her blog, plans to see to it that he find the man behind The Flash mask and he believes Iris is just the person to do it. This puts Barry in a fit and he sets out to stop Tony once and for all, though their second go-round ends much the same as their first, only Tony believes he’s killed The Flash (whom he still doesn’t know is his former classmate) this time. And in the wake of that, he goes so far as to kidnap Iris bringing her to their old school planning to coerce her to write about him.

Worried, Barry insists that Caitlin and Cisco search everywhere, hack cameras – do whatever it takes to find Iris, only she finds them. A fire alarm at their old school is the only clue Barry needs to appear on the scene and with advice from Joe not to let his history with Tony cloud his judgment, an all-out battle begins. Barry remembers his training with girder and Cisco’s figures for the right speed to take down Tony. He needs to travel at 837 miles per hour – faster than the speed of sound). During their clash, Barry flashes back to a childhood memory of Joe telling Barry it’s okay to run sometimes and that’s just what he does, faster than the speed of sound and with an assist from Iris, they knock out Tony. 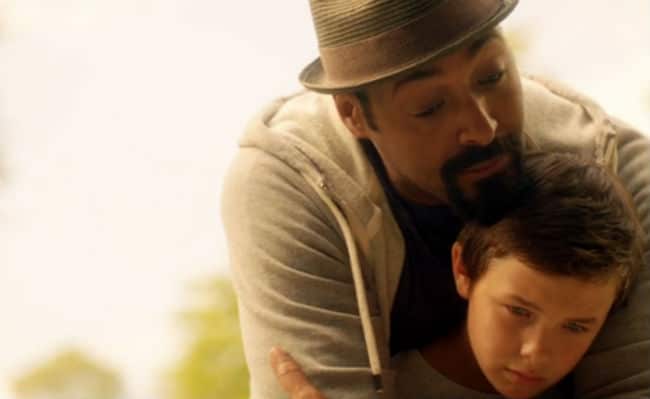 Much to Cisco’s delight, Barry uses that “supersonic punch” to undo his childhood bully. This brings Tony to Star Labs where he is stuck in a (presumably) secure room taking away his option to escape. And when Barry gets his moment of triumph over Tony (and he realizes who The Flash is), Cisco suggests they next take down his or Caitlin’s childhood nemesis. 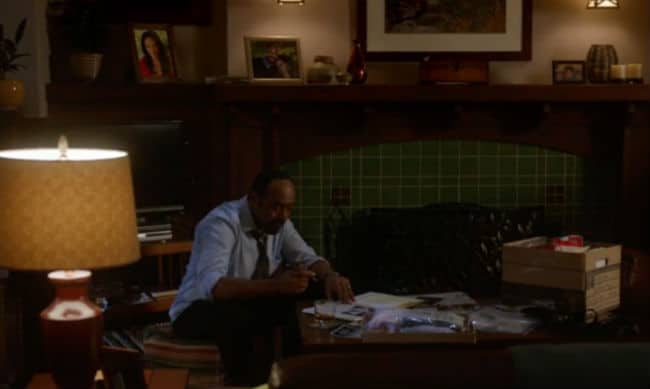 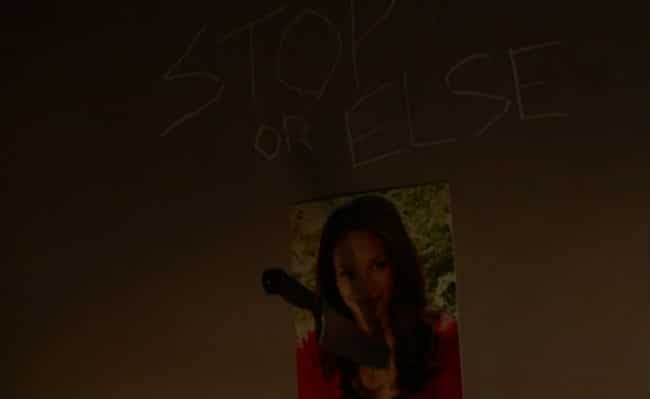 Back to Joe we go. For that side investigation he is busy with, we see him going to Wells for clues about Nora Allen’s murder. He begins to put the pieces together and takes his suspicions that there was another particle accelerator 14 years ago at the time of Barry’s mother’s death – questioning Dr. Wells about when he moved to Central City, putting him in potential danger from the man of science. (The labs opened only a month after Nora’s death.) Put out that Joe is suggesting he had something to do with the events of 14 years ago and suspects him, all Wells gives Joe is a name: Tess Morgan, look her up – there will be the answers for Joe, he says. Through this, we learn that Wells has a tragic(?) past as regards a former colleague’s murder and the tale he spins for Joe is one that potentially made him the bitter man he appears to be in the present.

Later at the end, back at the West home as Joe works the unsolved murder (and crosses out Wells name), Joe is visited by (seemingly) the same force that killed Barry’s mother – in its wake, all of Joe’s files and notes are gone but in its place, there is an ominous message with a knife stuck in Iris’s picture asking Joe to “stop or else” his pursuit of the answers. What does this mean? Who is this unknown man? These are some interesting questions.

The episode winds down with Barry visiting Iris under the guise of checking in how she is after her ordeal, the two make up and Barry gives Iris the new name for her fangirl obsession with the streak: it’s now The Flash. Something, she says, she has a feeling is going to catch on.

Next week, we’re going into a ‘Power Outage,’ join me again as I recap that. Until then, as always, share any thoughts or speculation you have. Did you like this episode? If so, what were your favorite moments?

Our romance-themed entertainment site is on a mission to help you find the best period dramas, romance movies, TV shows, and books. Other topics include Jane Austen, Classic Hollywood, TV Couples, Fairy Tales, Romantic Living, Romanticism, and more. We’re damsels not in distress fighting for the all-new optimistic Romantic Revolution. Join us and subscribe. For more information, see our About, Old-Fashioned Romance 101, Modern Romanticism 101, and Romantic Living 101.
Pin this article to read later! And make sure to follow us on Pinterest.
By Rissi JC on November 19th, 2014