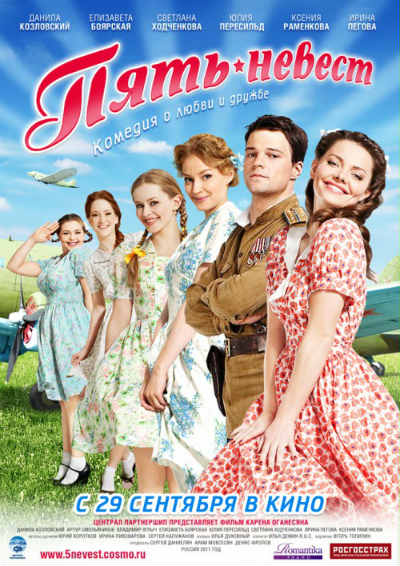 As a big fan of foreign films, I wanted to share this sweet Russian gem with you. If you’re ever in need of a pick-me-up, look no further. Five Brides will transport you back to a time without computers and endless books that help one master the dating scene. Meet the youth of the mid-1940s who simply want to love and be loved in return without over-complicating matters with things like getting to know each other first.

Related Post: Wartime Romances In Film: A Look Back

After WWII ended in 1945, some soldiers had to remain stationed at their posts in Germany as a precaution. The young pilots are naturally upset that they have to remain behind. After all, this means that all the prettiest girls will be taken by the time they get back home.

“The war is over! Now it’s time to think about girls and love.”

Tired of fighting just to survive, the boys want to go home and start families of their own. Vadim, one of the group, even already has a girl he can’t wait to marry. They have been writing letters to each other throughout the duration of the war. So, when Aleksei Kaverin is sent on a short vacation back to Russia, Vadim asks him to marry his Nastya in his stead and bring her back to the base with him. After all, these trips are few and far between, so there’s no telling when another chance will present itself.

Friendship Above All Else

Aleksei grudgingly agrees after having his friendship doubted. After all, nobody can manipulate as well as a friend can. As if this wasn’t bad enough, the rest of his friends suddenly decide that they want to get married too. They ask him to bring each of them back a wife, stating that they “trust his judgment.”

And so this impromptu holiday suddenly becomes a mission of the highest order of difficulty. Our brave pilot decides to face things squarely with a plan to act first and cross the next bridge if and when he gets to it, in what the girls are quick to call the “male approach.”

The adventures meet him head on as soon as he lands and arrives at Nastya’s (Vadim’s fiancée) house. Before Aleksei even has a chance to explain himself to her, they are rushed off to the officiator and married on the spot. So our first bride is taken a tad off guard when she realizes that the person she just married is not who she thought he was. She promptly faints on the spot “out of happiness.”

With only a 24-hour window to find four willing brides, it soon becomes evident that our pilot is quite hopeless at this bride-hunting business. Thankfully, once the situation is explained to our wailing first bride, the girls take matters into their own capable hands.

Related Post: An Ideal Husband – A Sassy Story about Blackmail… and Romance

As luck would have it, the girls don’t need a lot of persuading. Indeed, some are even overenthusiastic like the second bride pictured above. They are just as eager to love and be loved. The fact that they don’t know anything about their future husbands is of little importance at a time when death could come swiftly and unexpectedly. War has a way of forcing people to live in the moment like nothing else. A big reason for this eagerness is that there are no available young men in this village. Most of them went off to war never to come back again.

It doesn’t take long for this Bride-Hunt to turn into a Bigamist-Hunt. In a small village such as this one, the relatives of the girls soon arm themselves with cooking and farming utensils and make our youth’s mission that much more difficult. Since the girls are more than willing to go off with the pilot, it doesn’t make it easy for the police and parents to catch them.

Naturally, the film wouldn’t be complete without our groom having his shot at love too. He meets his match in Zoya, the driver of the postal/ getaway truck. She dresses like a man, is covered in machine oil, and makes it clear that she does not want to marry. In fact, by contrast, Aleksei becomes the feminine one and just one of the girls.

Related Post: The Man from U.N.C.L.E. – Smart and Stylish

The eagle-eyed of you will have noticed that the male lead looks very familiar. That is because you may have watched Danila Kozlovsky play Dimitri Belikov in the recent film adaptation of Richelle Mead’s Vampire Academy. Admittedly, that particular film did not appeal to me in the end, but I cannot deny that each time this actor appeared on screen everything was a lot more exciting and interesting. So, if you liked him in Vampire Academy, you will love him in Five Brides. Especially since he sports his usual short hairstyle here which suits him infinitely better.

Why You Should Watch Five Brides

It’s a kind of film that is both adorable and extremely funny. It depicts a situation that would probably never happen in real life (not even in the 1940s). But just because something isn’t realistic has never stopped us from enjoying it before.

This is such a feel-good film that it kept me laughing and cheering on our group of romantics from start to finish. Such films just don’t get made very often anymore, which is a shame. I love it when a modern film is put together in an old-fashioned style like this one was. This is clearly an homage to screwball comedies of yonder days. The fact that it is dedicated to everyone’s grandparents is also a lovely touch. It was a pleasure to watch this unlikely tale set at a time when love was something people went out of their way to get and keep.

“Marriage is a powerful thing. I’ve never even laid eyes on my husband and yet I miss him already!”

Content Note: This film is rated 14+ but is a fun film for the whole family to enjoy in my opinion. The only hint of impropriety is the philandering wife of the head of the base. There is no nudity, strong swearing or scenes of a sexual nature.

Where to Watch: Five Brides is not available on DVD with English subtitles, as far as I can tell. However, you can watch it for free on Central Partnership’s official YouTube channel by. Remember to turn on CC for subtitles and watch it while you can.

(I would probably give this film a higher romance rating, but this quote was too fitting to miss out on the chance to use it!)

Our romance-themed entertainment site is on a mission to help you find the best period dramas, romance movies, TV shows, and books. Other topics include Jane Austen, Classic Hollywood, TV Couples, Fairy Tales, Romantic Living, Romanticism, and more. We’re damsels not in distress fighting for the all-new optimistic Romantic Revolution. Join us and subscribe. For more information, see our About, Old-Fashioned Romance 101, Modern Romanticism 101, and Romantic Living 101.
Pin this article to read later! And make sure to follow us on Pinterest.
By Yaroslavna Simdyankina on April 18th, 2017