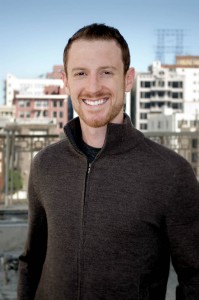 Filmmaker Ethan Shaftel of the new award-winning sci-fi short Flesh Computer is here to tell you a little bit about himself and his latest film. (You can read my full review of Flesh Computer HERE.) On top of being a talented writer and director, he is also a successful editor (including editing music videos for Katy Perry and Beyonce) and game designer.  So take a few minutes to check out his answers to our Petticoat Personality Test and find out what book and film recommendations he has for you and whether or not he believes video games can be considered art.

Name a movie that inspires you and why.

TIME BANDITS by Terry Gilliam has been my favorite movie since I was in kindergarten.  Every detail is so packed with meaning and mystery —  I could literally write pages of examples: the way Sean Connery as Agamemnon looks forlornly at his wife, how the hero has to keep putting up with the dwarfs being complete jerks again and again, Robin Hood as a politician, what God is like when he shows up, the crazy-glorious-horrifying ending… No other work of art has been so continuously surprising and relevant to me in every era of my life and at every age when I re-watch it.  In fact, I want to go watch it again right now…

What was on your summer reading list when you were a teenager?

I read a really mixed bag of classics I knew I ought to read and usually ended up enjoying (Hemingway was a favorite), plus “airport bookstore” type spy novels and tech thrillers I completely enjoyed and was proud of reading because I considered them grown up, (Tom Clancy, Michael Crichton).  But mostly I liked big fantasy series that I was embarrassed to be caught reading, but loved more than all the others, (David Eddings, Anne McCaffrey, Robert Jordan…)

What is a book you can read over and over?

ALICE’S ADVENTURES IN WONDERLAND has been my favorite since childhood and I’ve read it several times.  More recently I’d have to say JONATHAN STRANGE AND MR. NORREL, which I’m just starting to re-read for the second time and am already wondering why I put it off this long.  For a long time LONESOME DOVE was the only book I’d read on three occasions.  It’s just hard to justify re-reading with so many new books out there.

Well, amongst contemporary authors I consistently love Ian Mcewan and Robert Harris — I’m having a hard time waiting for that last Cicero book…

HOUSE OF THE SPIRITS by Isabel Allende — it is my girlfriend’s favorite book but I’ve never read it.  And we’re starting GAME OF THRONES on HBO to find out what all the fuss is about…

I hesitate to recommend them because the stunningly sexist and racist main character can be an obstacle to pure enjoyment, but the FLASHMAN books by George McDonald Fraser are like nothing else I’ve ever read. I’ve learned so much about the Victorians and the big names of the British Empire, plus the major political events all over the world from the Indian Mutiny, the slave trade, opium smuggling in China, the disastrous charge of the Light Brigade… There is even a fly-on-the-wall account of John Brown’s raid on Harpers Ferry that started the Civil War.  The books are also hilariously fast paced and entertaining, but again, half the time is spent being appalled by Flashman himself.

If you could be or live as any character (Book/Movie/TV Show) for one day, who would you choose?

Okay, If I’m going to be really annoyingly logical about this one, I’d have to shift the focus from how much fun I’d have during that day to instead what I could DO as that character to make things better AFTER the day was over, right?  So I’d pick something like the Genie from Aladdin or Dr. Manhattan or some other super powerful being.  I could repair the ozone hole and desalinate a bunch of water for California, make healthy food taste as good as junk food, and go mine some diamonds from asteroids.  Oh, and then settle this net neutrality issue, somehow.

I just watched THE PERVERTS GUIDE TO IDEOLOGY by Sophie Fiennes on Netflix.  Amazing flick — it’s an experimental documentary, really just a lecture by philosopher Slavoj Zizek about cultural symbolism where he is inserted into many different movie clips explaining the meaning and operation on culture.  Super interesting stuff, with great clips of Taxi Driver, They Live, The Sound of Music, The Dark Knight, A Clockwork Orange, and on and on.

Absolutely. There is nothing about the medium itself that holds back an interactive experience from being art.  Qualifying as “art” has a lot to do with intent, however, and I don’t think most of what we refer to as video games are intending to be art, at least not on the surface.  But I think THAT has a lot to do with the maker’s perception of what the audience wants.  No one seems to disagree that FILM is an art form, for instance, but If you look at the marketing of most mainstream films, you can clearly see that the marketers believe being labeled as ART would be a turn-off to the audience and go to some length to avoid it. The exception is of course the art house film, where a poster full of festival laurels is de rigueur.  But that is also becoming the case in indie games and art game circles, and definitely among the weirder web designers, so there are exciting times ahead.

That’s easy — the future.  I can read all about the past, or go to Guédelon Castle and spend the day pretending I’m a squire, but no one can tell me what is going to happen next Tuesday, much less in a decade or a century.  I just want to take a look and see if the Singularity happens and if we’ll understand consciousness any better in 100 years…

“Ethan Shaftel is a director, game designer, film editor and 10-year veteran of the entertainment industry. He made short films and games growing up in Kansas before receiving a scholarship to USC and a filmmaking award at AFI. Ethan’s independent sci-fi feature SUSPENSION played at genre festivals around the world and was released by Warner Home Video in 2008. In addition, he has directed a successful line of Hasbro games and screen content for musicians such as Tiesto, Foster the People and Jane’s Addiction. Outside of work, Ethan is obsessed with travel and has lived for extended periods in both Italy and Japan.”

You can learn more about Ethan at www.ethanshaftel.com.

SYNOPSIS – A weary handyman does his best to maintain order and care for his cybernetic ‘pet project,’ a strange mix of machine and flesh. But when a pair of thuggish residents threaten a young girl, the line between human and machine becomes blurred.

FLESH COMPUTER, a short film from writer/director Ethan Shaftel, explores the nature of consciousness by jumping between the perspectives of an eclectic group of characters including a young girl, a vicious bully, and a tiny housefly. Noted philosopher David Chalmers appears in the film and raises some fundamental questions on consciousness in counterpoint to the action. Also starring Rob Kerkovich (NCIS: New Orleans), Anthony Guerino (30 Rock), and introducing Elle Gabriel.

We played this summer at Fantasia Film Fest in Montreal, and earlier in the year at Sci Fi London and about 20 other film festivals, and picked up 3 awards from 3 different festivals (for special effects, music, and screenplay).

A very unique aspect of the movie is that woven into the fictional narrative is an interview with David Chalmers, a noted philosopher and cognitive scientist, whose work has focused on the theory of mind for decades.  (He gave a very well-received TED talk about consciousness this March – www.ted.com/talks/david_chalmers_how_do_you_explain_consciousness).

Another notable participant is the special effects artist who built the “flesh computer.” His name is George Troester and he’s currently competing on SyFy Channel’s “Face Off” TV show — a special effects makeup competition show – www.syfy.com/faceoff/contestants/george_troester_iii

Our star Rob Kerkovich just landed a series regular role as a morgue attendant on NCIS: New Orleans, but you might recognize him from Modern Family, Masters of Sex, and a small part in Cloverfield – www.hollywoodreporter.com/live-feed/ncis-new-orleans-adds-new-719360