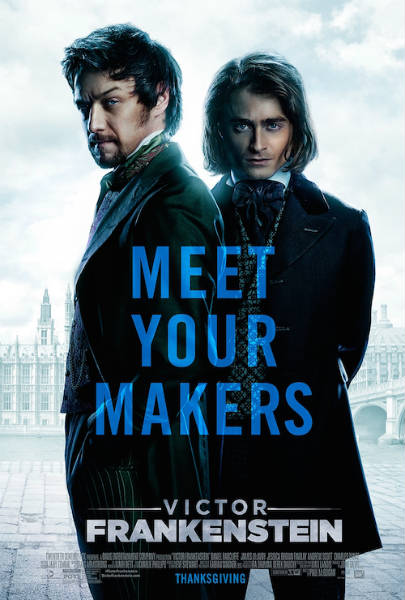 The tale of Frankenstein is one that has been told and retold through the years. In Victor Frankenstein, we see the man behind the monster and the madness as told through the eyes of Victor’s friend, Igor (Daniel Radcliffe). The film opens with a voiceover from Igor explaining how he lived at a circus outside of London, working as a clown. He is horribly mistreated, due to his misshapen back that causes him to walk hunched over. But despite his terrible life, he also doubles as the company doctor, and spends his free time reading as many medical texts as he can, and sketching pieces of the human body to distract himself from the commotion of the circus.

Igor, at this point, is unnamed, and has a secret — he is in love with one of the acrobats, Lorelai (Jessica Brown Findlay), who, unfortunately, does not know of his love. One night she falls from her beam during her act and breaks her collarbone. Igor, desperate to save her, fixes her bone with the help of Victor (James McAvoy), who appears out of the audience. Recognizing Igor’s quick reflexes and knowledge, Victor tries to convince him to leave the circus, but Igor refuses.

Recognizing Igor’s quick reflexes and knowledge, Victor tries to convince him to leave the circus, but Igor refuses.

Soon after, Igor finds his belongings ruined, for the head of the circus thinks Igor is acting conceited after saving Lorelai’s life. Victor helps Igor escape, with some scientific ingenuity and luck. Unfortunately, in the melee, a man from the circus is inadvertently killed, with Igor and Victor seemingly to blame.

In his apartment, Victor explains that Igor does not, in fact, have a hunch on his back, as previously believed, but instead a large abscess has forced his spine to bend over, giving the appearance that he is disfigured. After a brief surgery and a back brace, Igor is able to train his spine to sit correctly in the vertical position. With a new outlook on life, Igor becomes Igor after Victor tells him that he is to take his roommate’s name if anyone should come calling since the real Igor is hardly ever in the apartment. Victor is a medical student at a local university and tells Igor that he is to help him with a side project.

Igor, stunned at his fortune, agrees, and wakes the next morning, quite literally, a new man.

A note left by Victor explains his class schedule, and after borrowing some of Victor’s clothes, Igor decides to wander the city. He goes to the hospital where Lorelai is healing, and gives instructions that she is to be taken care of and that he, as a friend, will return to visit her. As Igor is exploring, a man from Scotland Yard, Inspector Turpin (Andrew Scott) takes in the scene of Victor and Igor’s escape that caused the circus man to be killed. He comes across some of Igor’s drawings left behind and takes a sketch of Igor to be rendered, along with Victor’s likeness for wanted posters plastered across the city. Igor comes across one of these posters and is distraught when he shows it to Victor. Victor laughs it off, and dives into telling Igor that he will be his assistant, and shows him a piece of the project he is working on.

Victor wants to regenerate pieces of animals that have since expired, and Igor is key in helping him with this.

Over the next few weeks, Igor helps Victor with his project, though Victor never completely allows Igor to see the full project, as he takes the pieces Igor has worked on to the basement, where Igor hears mysterious noises.

Igor also visits with Lorelai, though with his new appearance and under the influence of a fever, she does not know who he is. She eventually heals, and leaves the hospital, not to return to the circus, but to instead be a kept woman for a baron. As Victor and Igor work on their animal regeneration, Inspector Turpin searches for them, but they are always one step ahead of him. One night, Victor decides to take Igor out on the town and Igor makes his debut into high society. He sees Lorelai at the party where he and Victor are and loses his nerve to talk to her. She notices him, and though initially she can’t place him, she does realize who he is, and they are enjoying each other’s company until Victor interrupts them. A heated discussion about life and death leads Victor to take Igor away from Lorelai to show him the project they’ve worked so hard on.

SPOILER It is a stitched together homunculus, the majority of which is a chimpanzee; made from parts that Victor has managed to get from the zoo and the laboratories at the university. Igor can’t quite believe that they can jump start life from the deceased creature, but when Victor does this very thing, it seems like a miracle. Victor tells his friend that they are now partners, and that they are to show their creation during a presentation at the university the next day.

The presentation set to a nearly empty room, begins disastrous, with Victor nervous, and the creature unresponsive to the electric volts that the men send through its body. Igor has invited Lorelai to the presentation, and she seems unconvinced, as most of the men in the room are as well. They start to leave,  with one of them, another student named Finnegan continuing to harass Victor and Igor as they continue to fail. Finally, they bring enough voltage to awaken the chimp, who goes on a rampage and tears the halls apart. Victor and Igor are forced to kill the animal, but Finnegan is impressed and tells them that he will fund their next project. Victor claims that they can create something bigger, something better than the chimp — a man. He and Igor argue over the moral question of doing such a thing.

As Victor spirals into madness to create a living thing, and with Inspector Turpin threatening to imprison the two men, Igor must decide how far he is willing to go for his friend.

For viewers looking for a true adaptation of Mary Shelley’s Frankenstein, this is not the film for you. But if you’re looking for a clever, campy film with the same inventiveness and similar aesthetic as Guy Ritchie’s Sherlock Holmes films, then Victor Frankenstein will satisfy that need! James McAvoy looks entirely crazy for most of the film but looks like he’s having a ball doing so. Daniel Radcliffe’s performance as Igor is very empathetic, and he does a good job of balancing melodrama with ironic comedy. Andrew Scott helps to round out the cast, with his inspector portrayed as obsessed with finding Victor and Igor as they are with creating life. A romance does blossom between Igor and Lorelai, and it is a good counterbalance to the intensity of Victor’s chaotic breakthroughs. Theirs is a quiet romance, but Radcliffe and Findlay have good chemistry, and their story helps to strengthen the backbone of a very enjoyable film.

Victor Frankenstein is released by 20th Century Fox, is rated PG-13, and is now in theaters.

Our romance-themed entertainment site is on a mission to help you find the best period dramas, romance movies, TV shows, and books. Other topics include Jane Austen, Classic Hollywood, TV Couples, Fairy Tales, Romantic Living, Romanticism, and more. We’re damsels not in distress fighting for the all-new optimistic Romantic Revolution. Join us and subscribe. For more information, see our About, Old-Fashioned Romance 101, Modern Romanticism 101, and Romantic Living 101.
Pin this article to read later! And make sure to follow us on Pinterest.
By Clarissa Hadge on December 6th, 2015