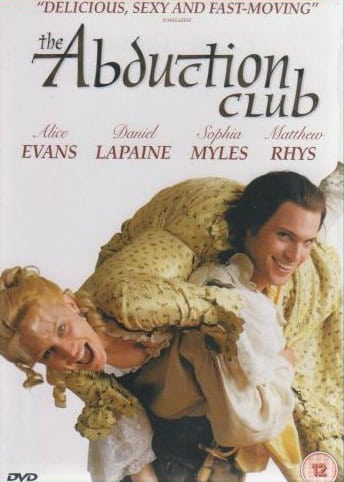 The Abduction club (2002) is a period drama directed by Stefan Schwartz. It stars Alice Evans, Daniel Lapaine, Mathew Rhys and Sophia Myles of Moonlight fame. Set in Eighteenth Century Ireland, when younger sons of rich families had to depend on their elder brothers for a meagre share of their wealth, we meet Byrne and Strang, members of the elusive abduction club. This was a gentleman’s club for single younger sons with no inheritance. The chosen man would approach a lady of means in society and gain her heart. When sure of her acceptance the man would come to her house in the company of friends and formally ‘abduct’ her. The lady would usually be delighted to be taken away from less desirable suitors. She would be taken to a safe house where, should she accept, they would be married in secret. If not, the lady would return with her virtue and reputation intact. By keeping to a strict moral code the club has until the events of the film, managed to avoid the eye of the law.

When the time comes for Byrne to perform his courtship and abduction, he bungles it and the two gentlemen meet their match in the two Kennedy sisters.  Catherine and Anne have ambitions, secrets of their own and no intention of being so easily charmed into matrimony. After an encounter with the Red Coats goes horribly wrong, the four find themselves fleeing across Ireland into unanticipated adventure, with an angry suitor and the Attorney General in pursuit.

It is a fast-paced caper with not one but two love stories that evolve over the course of the film. These develop in stark contrast to each other, though I must admit to finding the secondary couple more interesting. It has elements of romance, swashbuckling adventure, comedy and drama.

The soundtrack is as enjoyable as the script and matches the mood of any given scene perfectly. The film uses the beautiful landscapes and stately homes of Ireland to full effect. The four main characters are incredibly likeable and you will find yourself cheering them on as they evade the authorities and gallivant across the countryside. The film is full of sharp yet warm humour that complements the action perfectly.It is a thoroughly enjoyable romp that will appeal to audiences of all ages, especially those who enjoy adventure and romance in large helpings.

The film does loosely follow real events but takes a large amount of artistic license with the story.  If you enjoy the film, I would not advise seeking out the truth as it is rather disappointing. I prefer to content myself with the fantasy and what a lovely one it is.

The film is available to buy on DVD (though it’s only sold in Region 2 format so you will need a multi-region DVD player if you live in America) and watch on itunes.

Our romance-themed entertainment site is on a mission to help you find the best period dramas, romance movies, TV shows, and books. Other topics include Jane Austen, Classic Hollywood, TV Couples, Fairy Tales, Romantic Living, Romanticism, and more. We’re damsels not in distress fighting for the all-new optimistic Romantic Revolution. Join us and subscribe. For more information, see our About, Old-Fashioned Romance 101, Modern Romanticism 101, and Romantic Living 101.
Pin this article to read later! And make sure to follow us on Pinterest.
By Elinor Cackett on November 19th, 2014