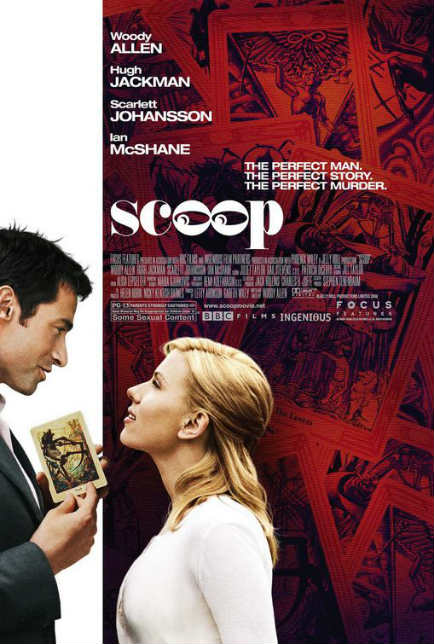 Woody Allen is one of those filmmakers I have a love/hate relationship with. His films get up to all sorts of mischief and never give its audience any visual ratification of a good ending. This is one of those movies that you will either like or dislike as it marches to the beat of its own drum. Scoop is a bizarre blend of fantasy and mystery that only comes along once in a great while. We begin with a group of people on a boat, shrouded in a ghostly haze with a figure at the helm that has no interest in talking with his passengers. Among the passengers is recently deceased journalist Joe Strombel (Ian McShane). Joe gets a tip from a fellow passenger on what could possibly be the biggest scoop ever; a name that could possibly be the elusive serial “Tarot card killer.” The only problem is … Joe’s no longer alive! During magician Sid Waterman’s (Woody Allen) show, Joe appears to American journalist student Sondra Pransky (Scarlett Johansson) to pass along the tip and name of wealthy aristocrat Peter Lyman (Hugh Jackman). As Sondra starts to investigate the seemingly nice yet mysterious Mr. Lyman, she pairs up with Sid to play along and together they come up with a clever plan to fool him. Seems simple enough, but of course, complications ensue.

At the time I saw this 2005 film, I wasn’t (that has since changed) a huge fan of any of the main stars. That meant there wasn’t much of a motivation to see it, but after reading reviews and seeing it here and there, I decided it was worth a try. For me, this isn’t a film I have added to my library, more like something I may rent again. There is a quality to the production that the viewer finds fascinating and out-of-the-ordinary, but there is also a peculiarity that clings to it that you can’t quite shake as the credits’ roll. The cast is fairly well known which was probably one of its biggest draws. Plus having Woody Allen on board for yet another of his “famous” comedies only added to whatever positive thinking audiences had going into this. I must admit though that Allen was comic gold and without him I’m not sure where this film may have gone. Romala Garari also has a small role, which was entertaining. 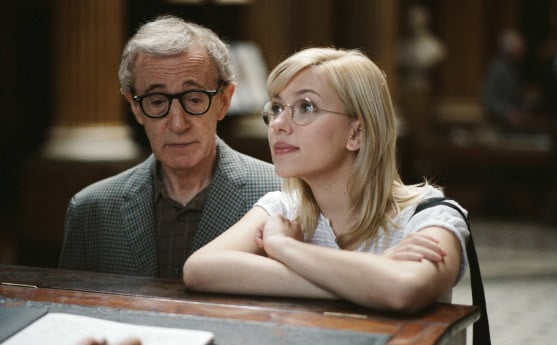 I found Scoop’s thematic elements to be poorly represented, specifically death. The group of people that are no longer among the living are portrayed as staying very much “alive” while simply being toted around on a floating object with a creepy character at the helm. Their state is depicted as tolerable, although they are no longer able to enjoy the pleasures of their former life. Aside from that theme, I disliked the heroine’s bad habits. For information, Sondra doesn’t bat an eyelash over doing anything it takes to get her scoop. This makes her harder to relate to and like because of that. That being said, I did love the “cozy” mystery quality instead of the edgy mystery solving we see too often in entertainment today.

In closing, this isn’t a “bad” film – it has a decent “hook” and throws a few twists and turns along the way, but is weighed down by its themes. I found Sid and Sondra’s relationship endearing. Plus, the rest of the cast is to be applauded, particularly Allen and Jackman (who plays the rich aristocrat with a hint of mystery surrounding him perfectly). The story could have been adorable, but there is just something here that leaves you feeling a bit uncertain. While the conclusion was halfway expected, it still catches you by surprise. If you’re a fan of quirky mysteries or Woody Allen, then Scoop just might be the right film for you.

What do you think, did you like this comedy? Are you a fan of Woody Allen? Share your thoughts down below.

Read our review of Magic in the Moonlight

Our romance-themed entertainment site is on a mission to help you find the best period dramas, romance movies, TV shows, and books. Other topics include Jane Austen, Classic Hollywood, TV Couples, Fairy Tales, Romantic Living, Romanticism, and more. We’re damsels not in distress fighting for the all-new optimistic Romantic Revolution. Join us and subscribe. For more information, see our About, Old-Fashioned Romance 101, Modern Romanticism 101, and Romantic Living 101.
Pin this article to read later! And make sure to follow us on Pinterest.
By Rissi JC on March 12th, 2015