Fates and Furies, a heart-stirring Korean Drama directed by Jung Dong-Yoon, tells a compelling story full of romantic suspense. Interestingly, the director also directs fan favorite K-Dramas like Suspicious Partner, My Love From Another Star, and Lie to Me. In collaboration with Kang Cheol-Woo who writes cute romantic dramas like My Secret Romance and Something About 1%, we have the perfect blend of romance and intrigue in one brilliantly thought out drama.

If you’re a fan of romance, revenge, and greed this drama will satisfy all your needs. Fates and Furies is a melodramatic revenge story but like all good revenge stories, at the heart, it is all about love. You have the added bonus of seeing Lee Min-Jung and Joo Sang-Wook working together. Their chemistry and acting abilities alone make this a must-watch. Now, when people hear melodrama, they think crying depressed protagonists – no thanks. But I believe this drama could hook some anti-melodrama fans out there. It’s that entertaining.

Goo Hae-Ra (Lee Ming-Jung) is smart and beautiful but very poor. Plus, she needs money to care for her sister who is in a coma after having attempted to commit suicide. She approaches Tae In-Joon (Joo Sang-Wook) who is the second son to a successful business. What starts off as a strategic ploy to get his money soon turns into a hunt for the truth as a sinister relationship between Hae-Ra and In-Joon’s family reveals itself. Amidst all this, we have a second couple Cha Soo-Hyun (So E-Hyun) and Jin Tae-O (Lee Ki-Woo) who portray another dimension of a relationship.

Family is a big deal in general but in Korean culture, family plays an integral role in your life. Add into that the potential of millions in inheritance and you are going to have a hard time getting away from family in the plot. Fates and Furies shows the toxic side of a family and what they can do to you. For instance, In-Joon has a volatile relationship with his father Tae Pil-Woon (Ko In-Beom) which is understandable considering In-Joon holds him responsible for his mother’s death. All of this tension makes for some interesting emotional drama that will leave you misty-eyed.

Then there’s Tae Jung-Ho (Kong Jung-Hwan). In-Joons step-brother is a character you will love to hate. He encompasses all the worst traits for a man tenfold. His motivation throughout the show is to get the throne by any means necessary. He will step on anyone he needs to, even if that person is his wife, his mother, or his father.

THREE IS A MAGIC NUMBER 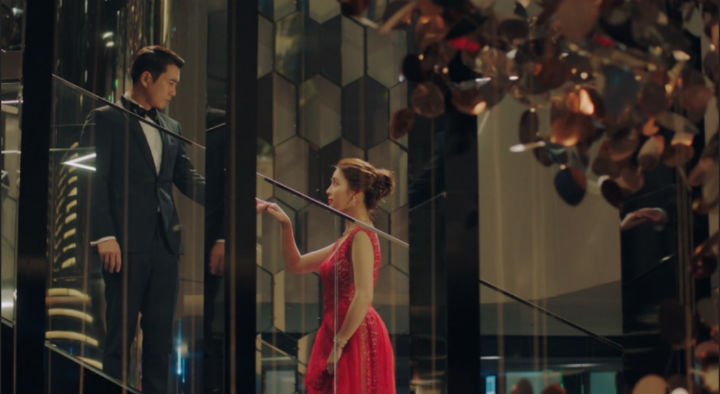 Three is always better than two. What am I talking about? Love stories. We have three potential ships that can sail. The main protagonist’s love is endearing. And the chemistry between Gu Hae-Ra and Tae In-Joon is palpable. When they both come on screen, you can feel it from your head to your toes. In-Joon has you wishing someone would look at you the way he smolders onscreen, (you are on my swoon list now). The magic they both create is like that of Cunning Single Lady (2014) but where that was comedy and laughter here we see a more serious side to both actors.

Then we have Soo-Hyun and Tae-O who show the traditional love/hate relationship. But this isn’t the cute and charming hate where it’s all a misunderstanding. No, we have real hatred, deep-rooted for reasons that become clear slowly over the course of the series. Still, there’s an essence of enduring love. I won’t spoil it and tell you whether this ship sails but it’s definitely a more mature look at relationships.

Lastly, we have Tae Jung-Min and Kang Ui-Gun. This is the classic meet-cute that slowly reaches love. But it is easily the most comedic of the three. Jung-Min is the rich spoilt girl while Ui-Gun is the innocent country bumpkin. Eventually, this becomes one of my favorite plots to follow. Especially with all the underhand moves, betrayals, double-crossing going on, this particular story injects something more refreshing into the drama.

With something for everyone to root for, there’s plenty of room for favorites to go around.

Kim Chang-Soo gets a special mention (Heo Joon-Seok) for giving me second lead syndrome. He shows fierce loyalty for Hae-Ra, helps her out when she has no-one. By the end of the series, I believe he fostered a love for her but one that was never explored in the series. If I didn’t want her to be with In-Joon, then he would be my second choice.

Being a regular viewer of Korean dramas you will be familiar with the sophistication and elegance in the costumes, makeup, and hair. But in Fates and Furies, the clothes are even more elegant, if you can imagine that. Lee Ming-Jung and So E-Hyun’s characters dress exceptionally well. I was repeatedly trying to look for replicas.

Also shoes! If you love anything to do with shoes, this show will keep you hooked. Personally, I am not that fond of shoes, but seeing the process of how they are conceived and created really kept me absorbed. This is an aspect of Korean dramas that I genuinely love. Fashion and fun.

Overall, most of the tropes of this show have been done before. Honestly, there’s nothing new. You could say it’s the same revenge story and the same romance. However, all is forgiven because the writing, the performances, and the chemistry all feels fresh.

Where to watch: VIKI

What are your thoughts on Fates and Furies? Sound off below?

Our romance-themed entertainment site is on a mission to help you find the best period dramas, romance movies, TV shows, and books. Other topics include Jane Austen, Classic Hollywood, TV Couples, Fairy Tales, Romantic Living, Romanticism, and more. We’re damsels not in distress fighting for the all-new optimistic Romantic Revolution. Join us and subscribe. For more information, see our About, Old-Fashioned Romance 101, Modern Romanticism 101, and Romantic Living 101.
Pin this article to read later! And make sure to follow us on Pinterest.
By Samra Anjum on May 15th, 2019

Book lover – reader and writer. Being a bookworm from an early age introduced me to all wonderful worlds, travelling from Narnia to Hogwarts. This became my hobby and passion leading me to pursue avenues where I can write not just for my enjoyment but also to progress my career. Some of my current obsessions include K-dramas, all things period - any BBC original adaptation. I am currently reading Dan Brown's new novel as well as "All men are Mortal" and re-reading "North and South" because you can never read enough about Mr.Thornton and Margaret!