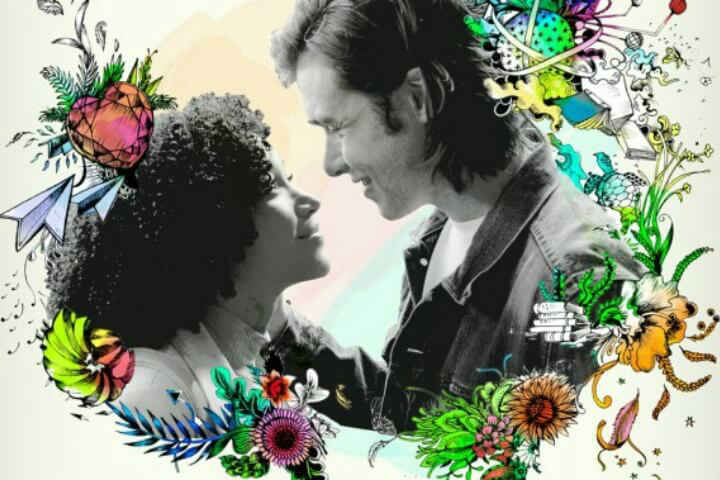 Unique stories often don’t get the credit or recognition they deserve. Sometimes because they’re so underrated that few people discover them. Other times, it’s because a conclusion is seen to be “too easy.” This film might fall into the latter category, but my interpretation of it finds something far greater in its imaginative story.

Today is Maddie Whittier’s eighteenth birthday. For Maddie, it’s ordinary. She spends it baking a birthday cake with her mom, followed by a competitive board game play. But unlike the normal activities of her peers, Maddie (Amandla Stenberg) is anything but ordinary. You see, for these past 17 years, she hasn’t stepped foot outside her house.

She has SCID, a rare disease that translates to one side effect: she’s allergic to everything. If she were to go outdoors, in all likelihood, she’d die. Her small world shifts on its axis when Olly (Nick Robinson) moves in next door. Clad in all black, Maddie’s world suddenly becomes a little bit bigger. There’s something mesmerizing about Olly, and the more she learns of him – through texts, emails, and notes, the more Maddie wants to know… and see. 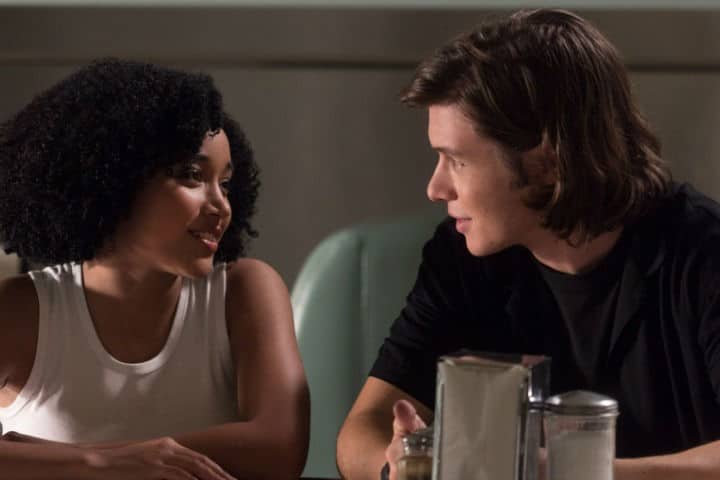 I read the best-selling novel on which this is based shortly before seeing the film. The novel (written by Nicola Yoon) is a contemporary story of first love and new experiences that teaches its heroine about the simple joys of life and the complicated emotions and feelings they invoke. What I discovered inside the pages of this beautifully jacketed novel is a bittersweet albeit beautiful novel. One of the things I loved most about its premise is that it tells a sophisticated story in a simplistic format that’s a delight to read.

In that same vein, one of the things that impressed me most about this as an adaptation is how the script works the doodles and texts into the film. I liked the imaginary face-to-face meeting set-ups (that are really texts) and the role Maddie’s architectural models play in the production. It’s unique how the film sets up these characters so that they can have more screen time together without compromising the story’s intent.

Sometimes YA adaptations get a bad rap because they’re “not the same” as the book. This is true of Everything, Everything, but the script and production itself really compliment Yoon’s novel. Visualization is going to come off a little differently than on the page, and I liked that this doesn’t sacrifice Maddie’s sarcastic, quirky nature or the way in which these two find friendship.

Additionally, the cast leaves an impression. Nick Robinson is no stranger to YA adaptations and some may recognize Amanda as the beloved character of Rue from The Hunger Games. Both actors turn in expressive and memorable performances. Their interactions are awkward, but it’s a deliberate “cute” kind of awkward. The kind their relationship should entail because Maddie is innocent of the ways of the world. Olly, by contrast, isn’t, but he’s never met anyone he feels such a special connection with. Their burgeoning relationship is illustrated to screen in near perfection.

Controversy found this book because of its ultimate conclusion. Saying more is not something I can do for spoiler reasons, but I will say this. The conclusion isn’t all rainbows. There are still things to consider, worries to contend with and emotions to sort through. In the meantime, there is this adaptation, which features beautiful acting and stunning scenery.

Content Note: There are some adult situations (teen sex), and minor profanity. The film is rated PG13.

Where to Watch: Everything, Everything is currently in theaters, and you can preorder it on Amazon Video.

Comment down below with all of your thoughts! Did you enjoy this adaptation? Have you read the book? What did you think of it? Sound off below with those thoughts!

Our romance-themed entertainment site is on a mission to help you find the best period dramas, romance movies, TV shows, and books. Other topics include Jane Austen, Classic Hollywood, TV Couples, Fairy Tales, Romantic Living, Romanticism, and more. We’re damsels not in distress fighting for the all-new optimistic Romantic Revolution. Join us and subscribe. For more information, see our About, Old-Fashioned Romance 101, Modern Romanticism 101, and Romantic Living 101.
Pin this article to read later! And make sure to follow us on Pinterest.
By Rissi JC on June 9th, 2017