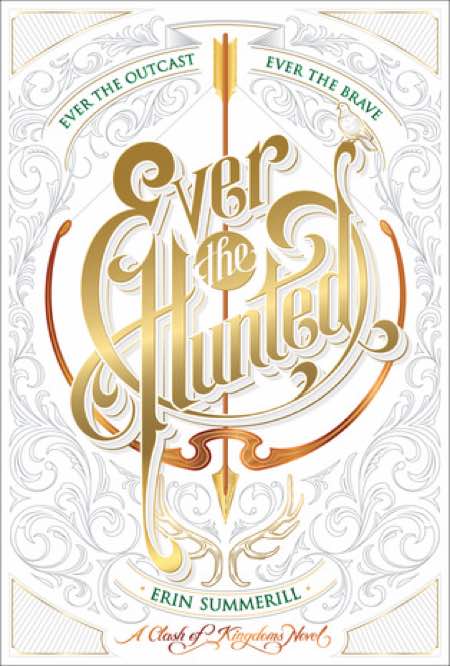 Ever the Hunted Book Review

I should probably admit right away that I decided to read this book after I saw an ad for it on our website. The white cover with gold lettering and elegant green designs swirling around the title really caught my eye. In this one case, I can definitely say I was right to judge this book by its cover. Ever the Hunted, the first book in the Clash of the Kingdoms series, clearly proves that the newbie authors on the scene are coming out with some great material.

If you are a young woman that happens to like fantasy, preferably with a female protagonist (who is strong but can also admit her own weaknesses and accept the help of others) that has to come of age during an adventure across two kingdoms, filled with the kind of old-fashioned romance that makes you feel butterflies in your stomach, a few thrilling fight scenes, and utterly steeped in magic, then this is what you’ve been waiting for all of your life. This fantasy will literally swoop you off your feet and carry you off into the sunset.

When seventeen-year-old Britta Flannery discovers that her father, a legendary bounty hunter for the Kingdom of Malam, was murdered, her life turns upside down. An outcast and alone, she seeks refuge in the Ever Woods. When royal guards catch Britta poaching, the high lord gives her a choice to earn her own freedom back by catching her father’s killer. The fact that her childhood sweetheart, the only friend she’s ever known, and her father’s former apprentice Cohen McKay happens to be accused of being that very killer complicates matters a bit.

RELATED YA Book Review: Enthroned, A New Twist on an Old Tale

When Cohen kidnaps, or “rescues” depending on whom you ask, Britta while she is trailing him with a group of elite royal guards in tow, and then discovers he’s not the real killer, things get even more confusing for this poor girl. And it just gets worse from there. Britta and Cohen embark on a journey to discover who her father’s real killer is. Along the way, she learns secrets about her past and her family that change her forever. Britta discovers just what makes her so different and the immense power inside her that will make her a force to be reckoned with if she can learn how to wield it.

This really is my favorite kind of story. I’m a sucker for girl power with some magic and romance mixed in. The storytelling in Ever the Hunted is truly accomplished. Erin Summerill is amazing at bringing the characters to life. In addition, she creates scenes that smoothly weave in such beautiful details and emotional undercurrents that even a sedate walk through the woods feels enthralling. There were no throwaway scenes. Everything hooked me from the very beginning and kept me enthralled by a book in a way I haven’t been in a while. While this story did have some exciting fight scenes, it certainly didn’t need them. The author beautifully fills every scene with immense detail and life, that even the most sedate scenes felt as exciting as the action scenes.

I also loved the way Summerill portrayed the two main characters, Britta and Cohen, exploring their romance in a very relaxed manner. She takes her time to bring them together, drawing out the most she can from every little gesture. Summerill completely embraces the style of a good old-fashioned romance and all of the wonderful poignant sighs and stolen looks that come with it. At the same time, I don’t just love the romance; I love the characters as individuals. Summerill portrays Britta as a fully fleshed out character with powerful emotions and honest reactions. As I read this novel she was as real to me as any person I’ve ever met on the street. All of Summerill’s characters are enjoyable to read and come across as fully fleshed out human beings. Each had very specific traits and characteristics, bringing them to life in my mind.

Overall, this book is a slam-dunk in my opinion. Erin Summerill is first of all just plain and simple a very talented writer. If you like fantasy mixed in with some adventure and a sweet romance to boot, then you’ll love Ever the Hunted.

With this book being the first in a series I think this would make an excellent mini-series. It reminds me of past ones that used to air on ABC like The 10th Kingdom. The adventure and journey style fits very well into the style of the mini-series, giving the story adequate space and time to unfold on screen.

You can buy Ever the Hunted on Amazon.

What did you think of Ever the Hunted? Sound off below…