(I received a free copy of Ever Alice from the publisher, Red Rogue Press. I did not receive any compensation for this post and all opinions are my own.)

About Ever Alice: Alice’s stories of Wonderland did more than raise a few eyebrows—it landed her in an asylum. Now at 15 years of age, she’s willing to do anything to leave, which includes agreeing to an experimental procedure. When Alice decides at the last minute not to go through with it, she escapes with the White Rabbit to Wonderland and trades one mad house for another: the court of the Queen of Hearts. Only this time, she is under orders to take out the Queen. When love, scandal, and intrigue begin to muddle her mission, Alice finds herself on the wrong side of the chopping block. 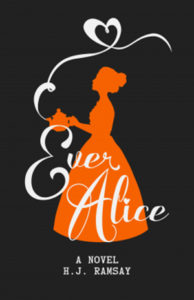 Author H. J. Ramsay delivers a quirky, faithful continuation of Lewis Carrolls’ Alice in Wonderland and Through the Looking Glass. After spending months locked away in an asylum, Alice finds herself back in Wonderland but this time, with an agenda. Recruited as an assassin by the “AboveGround Organization” (it’s Wonderland!), Alice must kill the Queen of Hearts to return home. Fans of Lewis Carroll’s beloved stories will adore this re-imagining of Wonderland.

The sly humor is familiar as are the characters and their most familiar traits. The return to Wonderland is like returning home for the first time in many years. Readers will find themselves as exasperated as Alice in the backwards and opposite speech of Wonderland. Where tea is best when smelling like old socks and where the most important conversations are actually the most unimportant. Ever Alice is faithful yet fresh in it’s approach to revisiting Wonderland.

Related Post | A Curse Dark as Gold: A YA Fairy Tale Retelling

In addition, Ramsay takes just as care in her detail of Alice’s “real” world. She captures the gloomy and frightening environment of late 19th century asylums perfectly. Namely, a fearsome nurse who’s chief goal is to strike fear in Alice. Further, Ramsay features an actual historical figure in Dr. Gottlieb Burckhardt, who began performing psychosurgery in the late 1880s. As a result, there is a surprisingly dark twist that will make readers question what they just read. Altogether, Ever Alice delivers a surprising, dark tale of what happened to Alice after her first visits to Wonderland.

Final Thoughts on Ever Alice

Ever Alice is not without faults. Many of the characters are two dimensional. This included characters central to Alice’s journey. While it’s clear everyone wants the Queen of Hearts dead, the Queen of Spades is lacking the depth to make readers cheer for her. Thus, Alice is also somewhat flat. However, this makes sense considering her time in an asylum. Also, the romance is….well, not so much a romance. It does become a hindrance to the story.

However, the Queen of Hearts, Rosamund, was brilliant. Her vanity and temper leaped off the pages. Moreover, Rosamund’s own spiral into madness echoed Alice’s experiences in England. Truthfully, I found myself rooting for the Queen of Hearts. I’m quite certain I was not supposed to adore her all that much. I think it’s difficult to write a sympathetic villain and Ramsay did it beautifully.

If you love “what happened next” stories, you will enjoy H. J. Ramsay’s loyal continuation of the classics. Fall back into the rabbit hole and experience Wonderland with a fresh new perspective!

Ever Alice will be available at your favorite bookseller in August of 2019.

Content Rating: It’s the Queen of Hearts so you know heads are rolling! The descriptions, however, are not graphic. Otherwise, Ever Alice is a clean read.

Are you a fan of re-imaginings of classics? What are your favorites? Sound off in the comments below! And when you read Ever Alice, let me know!

Our romance-themed entertainment site is on a mission to help you find the best period dramas, romance movies, TV shows, and books. Other topics include Jane Austen, Classic Hollywood, TV Couples, Fairy Tales, Romantic Living, Romanticism, and more. We’re damsels not in distress fighting for the all-new optimistic Romantic Revolution. Join us and subscribe. For more information, see our About, Old-Fashioned Romance 101, Modern Romanticism 101, and Romantic Living 101.
Pin this article to read later! And make sure to follow us on Pinterest.
By Catherine on February 8th, 2019