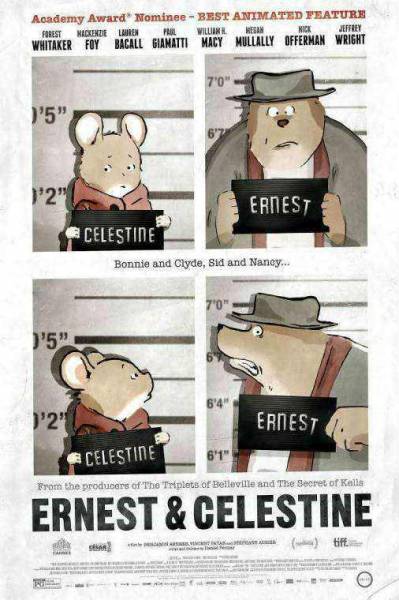 Ernest & Célestine is a French animated film based off of a Belgian children’s book series by Gabrielle Vincent. The screenplay was written by Daniel Pennac and directed by three people: Benjamin Renner, Vincent Patar and Stéphane Aubier. It is film that I previously had not heard much about, but the little that I did hear was nothing but praise. After finally watching this film, a single word comes to mind: charming.

The film is about a young dentist mouse in training named Célestine and a penniless musician bear named Ernest as they assist each other and become friends, much to the disapproval of both the authorities of the bear and mouse societies. Each side also fears the other, with the mice telling stories of “The Big Bad Bear” to their young and the bears killing mice on sight.

Though the story is simple, I appreciate how the film is able to tell its story effectively without any pop-culture jokes, adult humor, or biting irony. I felt that if the film had any of this then it would have detracted from the story and been too distracting.

There is an emphasis on individuality and doing the thing that brings you the most joy in life.

In my view, the story works as a great commentary on the class system with the mice living underground and the bears living up above. Another interesting element of the story that I found was how the world of the mice and the world of the bears have an almost symbiotic relationship but neither side would ever admit such a thing.

There are not very many themes and messages to the film but the ones that are present are not hammered in to the point of annoyance, which is always nice. The film is about prejudice and tolerance as illustrated through the bear and mouse societies. There is an emphasis on individuality and doing the thing that brings you the most joy in life. There is also a message about how physical differences should not be a defining factor when it comes to friendship.

Aside from the title characters, the other characters play minor roles. They are either used to spout exposition or used as obstacles for our main heroes to overcome. As a result, the most interesting and developed characters are Ernest and Célestine.

Ernest is a street musician and proves to be much nicer than his first appearance and growl suggest. He is a bohemian with little money. He has a lopsided grin, comically forgets how large he is and has a deep love for music, sweets and play. Much like Célestine, Ernest was discouraged from pursuing his art, mainly from his family. However, the stubborn bear did not listen to them and instead followed his passion. It is this passion for the arts that results in him encouraging Célestine in her art in various ways: giving compliments, giving her the items she needs to paint and even assisting as a model. In many ways, he is quite childlike.

Célestine, in contrast, is much more adult like and responsible. She grew up in a mouse orphanage and, unlike her peers, never believed that all bears were inherently bad. She is also agile and a fast talker. She is filled with ingenuity as well as a passion for drawing and painting. She is kind and gentle with a vulnerability to her she only shows Ernest. She only shows this vulnerable side to Ernest because he is the only one who shows an interest, acceptance and encouragement of her artistic talent. It is this acceptance that brings her closer to the bear and further develops their strong friendship.

The friendship between the title characters is very sweet. It grows and develops realistically and at a slow pace. They bond over their artistic abilities and how their respective society pressures them to be something they are not, something they do not want to be. For Célestine it is being a dentist and for Ernest it is being a judge. The script also plays with the humor of the situation the mouse and bear find themselves in. For instance, in the beginning of their relationship Ernest is attempting to keep Célestine out of his house, only for her to keep returning moments later. She is a mouse and can easily find small openings and imperfections throughout the building’s structure to sneak back in. The actions of Ernest and Célestine are not always morally right but they come from a place of heart and they both remain quite likable throughout the film.

The animation style is very reminiscent of a children’s picture book with thick, graceful line work, blurred edges and nice use of watercolors for the backgrounds and character designs. This is not really surprising considering the film is based off of a children’s book series and the style fits well with the film’s overall tone. The film also takes advantage of its style with some memorable dream sequences and a sequence detailing the passage of time through Célestine painting.

Despite the minimalist animation style, the action sequences are surprisingly well rendered and animated nicely. There is suspense to each of them that makes the audience want to see what happens with the bear and mouse. I personally found myself rather stunned by just how invested I was during the chase scenes, especially for a film that has such a laid back tone and allows for some great atmosphere.

There is a timeless feel to the entire production of Ernest & Célestine and this is not merely attributed to the fact that it is hand drawn. There is a quaintness and beauty to the movie and it is a shame this film did not get a wide release because I think more people should seek it out and give it a watch.

Our romance-themed entertainment site is on a mission to help you find the best period dramas, romance movies, TV shows, and books. Other topics include Jane Austen, Classic Hollywood, TV Couples, Fairy Tales, Romantic Living, Romanticism, and more. We’re damsels not in distress fighting for the all-new optimistic Romantic Revolution. Join us and subscribe. For more information, see our About, Old-Fashioned Romance 101, Modern Romanticism 101, and Romantic Living 101.
Pin this article to read later! And make sure to follow us on Pinterest.
By Moriah Burbank on June 14th, 2015