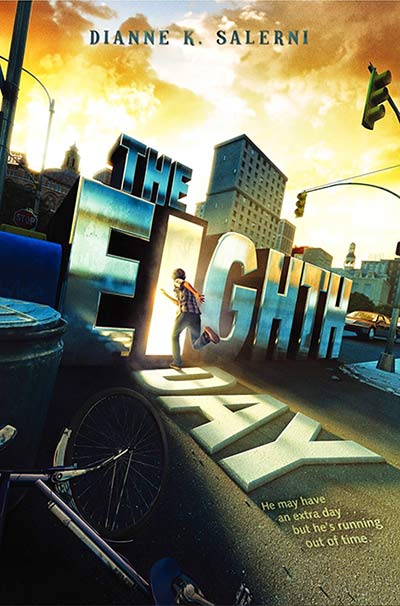 When Jax wakes up to a world without any people in it, he assumes it’s the zombie apocalypse. But when he runs into his eighteen-year-old guardian, Riley Pendare, he learns that he’s really in the eighth day—an extra day sandwiched between Wednesday and Thursday. Some people—like Jax and Riley—are Transitioners, able to live in all eight days, while others, including Evangeline, the elusive teenage girl who’s been hiding in the house next door, exist only on this special day.

And there’s a reason Evangeline’s hiding. She is a descendant of the powerful wizard Merlin, and there is a group of people who wish to use her in order to destroy the normal seven-day world and all who live in it. Torn between protecting his new friend and saving the entire human race from complete destruction, Jax is faced with an impossible choice. Even with an eighth day, time is running out.

Similar to the Harry Potter series, The Eighth Day has a special kind of appeal for readers of all ages. Like Harry, Jax discovers something magical on his birthday. Instead of becoming a wizard, however, Jax learns about the mysterious 8th day of the week, a day only a few people on the earth can experience. It has to do with bloodlines, bloodlines that go back all the way to Arthurian Legends.

It’s a secret he can’t share with the rest of the world, except, of course, his guardian Riley who has plenty of secrets of his own. Then there’s the next door neighbor Evangeline who can only live during the 8th day. As a descendant of Merlin, she’s a sort of prisoner and hasn’t spoken to anyone in five years. Jax is sure he can become her friend, a choice that could put everyone in the world in danger. Who she is and how all the pieces connect begin to unfold as the story progresses in a very entertaining, page-turning kind of way, but I won’t spoil too many of the surprises for you!

RELATED | 10 YA Fantasy Novels On My Shelf

As entertaining as The Eighth Day is, however, I did finish the book with a huge question: why in the world wasn’t Riley or Evangeline the protagonist of the novel? While I like Jax, I felt way more drawn into the characterization of these two more compelling characters. Indeed, it’s more their story than Jax’s. He’s the eyes into their world and that really does work, but at the same time, I wanted to keep returning to them rather than to Jax. Perhaps it is just the age old Dickensian problem of side characters stealing the spotlight. I’m really hoping the future books delve even more into these two characters and their briefly touched on romance.

Still, as a whole, The Eighth Day, is one of those book series you just don’t want to put down. With a great mythology and unique world that connects to the King Arthur myth, this is one magical series that I highly recommend.

The Eighth Day NEEDS to be a TV series. What better premise than a secret day connected to Arthurian legends? The potential in a show would be endless. The warring groups within the day also open several potential doors to new characters and room for the development of the minor side players. Because a TV Show is vastly different from a book series, I would also love to see more time spent on Riley and Evangeline. Flashbacks would be a great tool to use for these characters since that already came into play in the book. A TV Series could also focus more on the romantic angle between these characters than a middle-grade book does.

As for casting, I couldn’t help but think of the rising talent Douglas Booth (Romeo and Juliet, Pride and Prejudice and Zombies) as Riley. He has this intellectual charisma to him that would work in this role. And because I just love her in everything she does, I would have to cast Saoirse Ronan as Evangeline. She could pull off the sheltered young woman with a mysterious background easily, giving added depth and strength to this quiet, yet powerful character. For the main character Jax, I would do casting for a fresh face. Someone with the likeability of a young Elijah Wood.

What do you think about The Eighth Day? Who would you cast in the books? Sound off below…

Our romance-themed entertainment site is on a mission to help you find the best period dramas, romance movies, TV shows, and books. Other topics include Jane Austen, Classic Hollywood, TV Couples, Fairy Tales, Romantic Living, Romanticism, and more. We’re damsels not in distress fighting for the all-new optimistic Romantic Revolution. Join us and subscribe. For more information, see our About, Old-Fashioned Romance 101, Modern Romanticism 101, and Romantic Living 101.
Pin this article to read later! And make sure to follow us on Pinterest.
By Autumn Topping on May 3rd, 2016