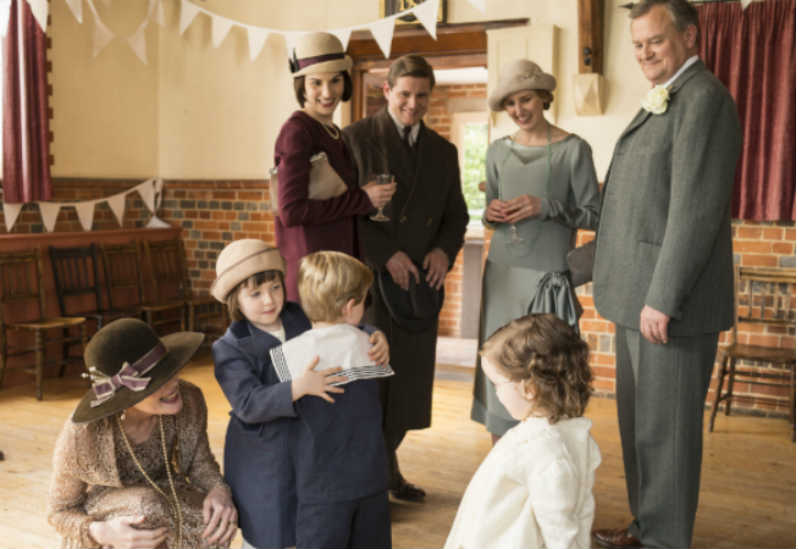 Last night’s third Downton Abbey season six episode represented many of the reasons we first fell in love with this show. The reason I say this is because there was finally a satisfactory conclusion to one beautiful story, not to mention the script gave Edith some play and brought back a much missed and beloved face. First things first, there is – *gasp* – dissension between Cora and her mother-in-law, the sharp-tongued Dowager Countess.

As debates for the hospital modernization continue, Cora and her mother-in-law press on with opposing sides of the issue. Violet believes she’s right while both women are pressuring Robert to choose his stance. Robert is afraid of both sides as he realizes, either way, he’ll be in trouble. The Dowager’s reaction to their conversation regarding this debate and Robert’s marriage to Cora being in the middle goes something like this: “I know several couples who are perfectly happy, haven’t spoken in years!”

Matters continue to worsen between Isobel, Cora, and Violet. None of them are willing to budge, though among them, it’s Cora who continues to be the voice of reason. Her arguments are valid whereas Violet and Isobel let their constant competition attempt to outdo the other. 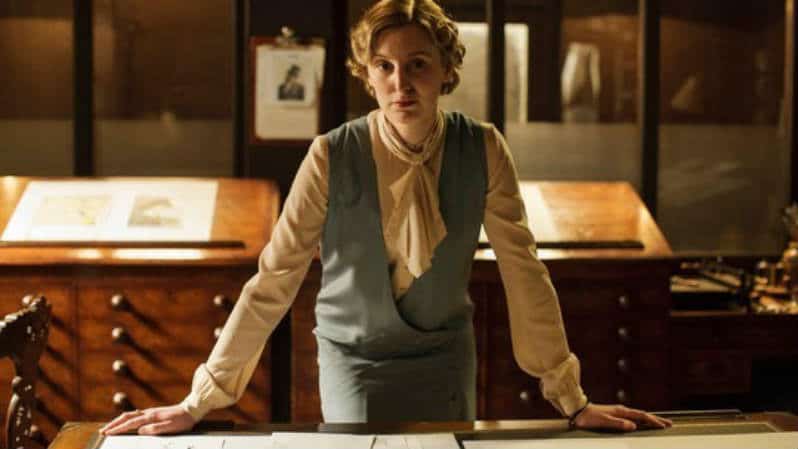 Edith’s trips to London continue with regularity. Her male chauvinist editor is still throwing fits prompting yet another trip to London. Edith begins to think about using Michael’s apartment (which she also inherited) in London rather than traveling back to Downton with each trip. For now, she often stays with Rosamund when she’s in town. Rosamund also plants an idea in Edith’s mind about joining a board for a women’s college. Her aunt believes Edith might be an ideal benefactor being the independent, modern woman she is. 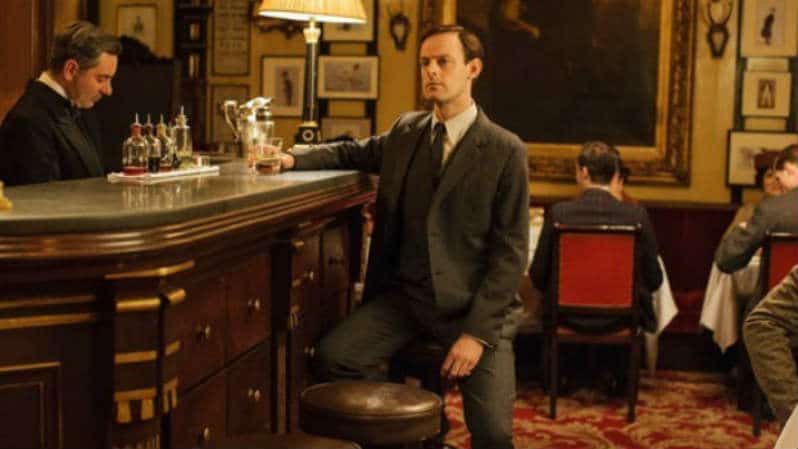 Also on this trip, Edith again meets up with Bertie Pelham. Bertie is the land agent she met while the Crawley family stayed with Rose’s parents last Christmas. While in London, Bertie convinces Edith to enjoy a drink with him before she makes the journey home.

At work, Edith finally fires her editor. This puts her in a tight spot and forces her to ensure her magazine meets its deadlines. Of course, this also puts a crimp in her social plans for the evening. When she finds Bertie to cancel, he lets nothing ruin the night. Instead, he returns with Edith to her offices, sleeves rolled up and ready to help. Something tells me, this kind man likes Edith!

With a wedding venue set – much to the dismay of the formidable Lady Mary, wedding preparations are in full swing. Mrs. Patmore decides Mrs. Hughes’ drabby suit she plans to be married in is horrid. With good intentions, she orders a new one for her, only it isn’t much of an improvement. Meanwhile, having made up with Mrs. Hughes, Mary believes the least they can do is lend her a coat. The perfect solution being one from Cora’s closet. As Anna, Mrs. Patmore and Mrs. Hughes are trying on Cora’s coats (with Mary’s permission), Cora walks into the room. Having been gone and dealing with a particularly trying day with Violet, she misconstrues the scene. Snapping at the servants she dismisses them in very un-Cora like behavior.

Mary eventually sets her mother straight, and the misunderstanding is rectified. An apology is given to Mrs. Hughes who is then gifted Cora’s beautiful coat, a wedding present and a gesture of Cora’s sincere apology. 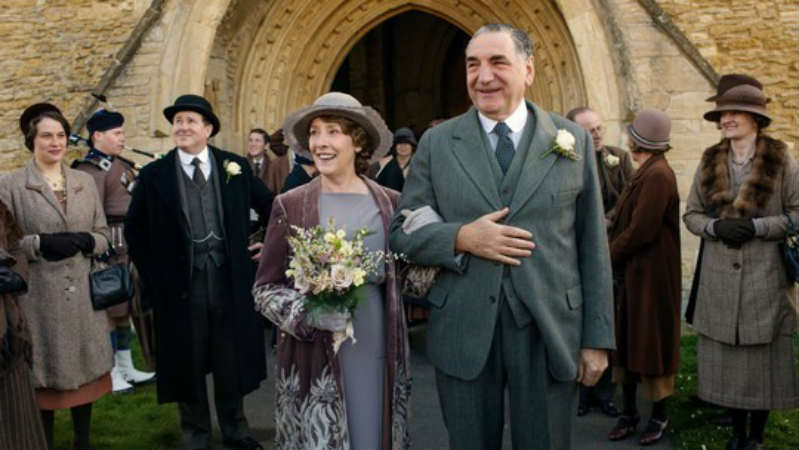 As the dust on the wedding drama settles, Mr. Carson and Mrs. Hughes finally say their I Do’s. To a much quieter ado are the pair united in marriage. Mrs. Hughes dons the new dress Mrs. Patmore ordered along with the elegant fur coat from Cora. The exchange of vows and rings take place, and from the church emerges Mr. and Mrs. Carson.

Smiling and happy, the pair leads the way to the schoolhouse where Mrs. Hughes’ ideal reception takes place. There are lovely decorations and guests mingling as the happy couple greets their guests, one of which is an unexpected arrival… 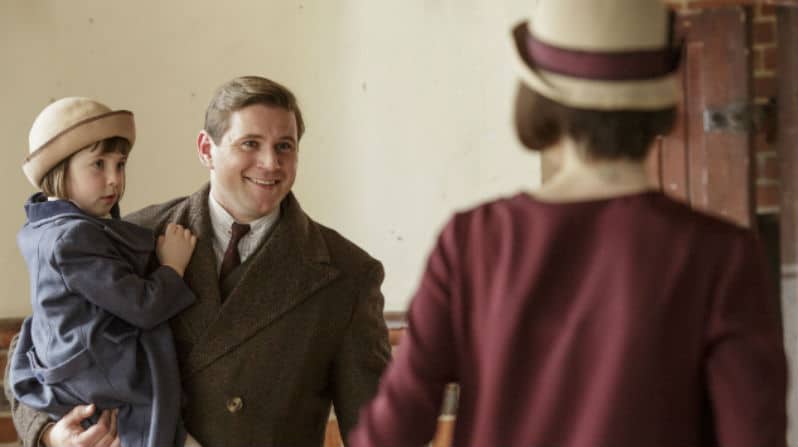 As everyone is merrymaking and enjoying the company, a voice in the background offers his boisterous congratulations. As the camera catches Mary’s face, we see it is Tom walking into the reception carrying a darling Sybbie. Joy breaks out, especially when the family realizes Tom is back to stay – Downton is home, he says. Cousins George and Sybbie are reunited along with little Marigold, and for now, at least, the family is together and enjoying some harmony.

+ Thomas continues to bemoan his preemptive dismissal.
+ Spratt gets himself into hot water with Miss Denker when she discovers he’s been helping his criminally inclined (and an escaped convict!) nephew. Something tells me Spratt may regret her knowing this.

Three episodes in, what are your thoughts on Downton Abbey season six, the final season? If you have any thoughts or standout favorite moments of this episode, as always, comment down below. I’d love to chat about the series thus far.

Our romance-themed entertainment site is on a mission to help you find the best period dramas, romance movies, TV shows, and books. Other topics include Jane Austen, Classic Hollywood, TV Couples, Fairy Tales, Romantic Living, Romanticism, and more. We’re damsels not in distress fighting for the all-new optimistic Romantic Revolution. Join us and subscribe. For more information, see our About, Old-Fashioned Romance 101, Modern Romanticism 101, and Romantic Living 101.
Pin this article to read later! And make sure to follow us on Pinterest.
By Rissi JC on January 18th, 2016