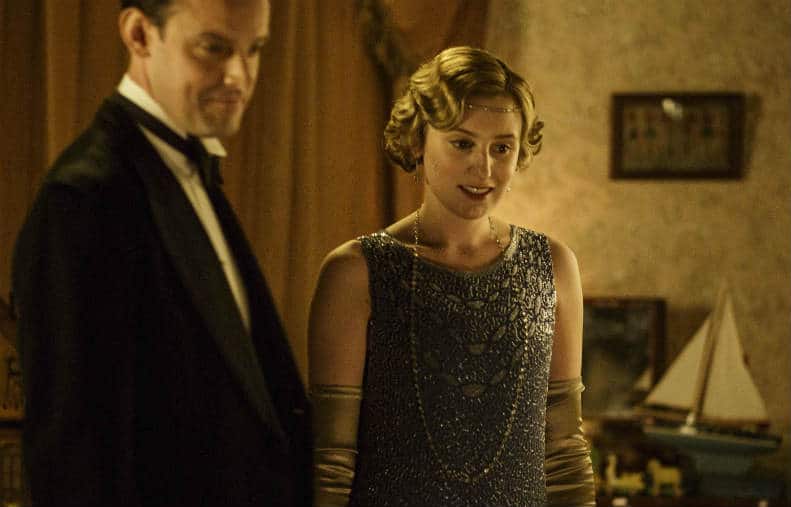 Last week’s episode of Downton ended on quite a shocking bit of drama. Robert’s declining health (which had been hinted at off and on throughout the season), came to a head. His ulcer burst led to a destroyed family dinner and in the aftermath, Mary learns a secret long kept from her. Because Mary is Mary, we know she won’t let this go.

The question remains: what will she do with this knowledge? 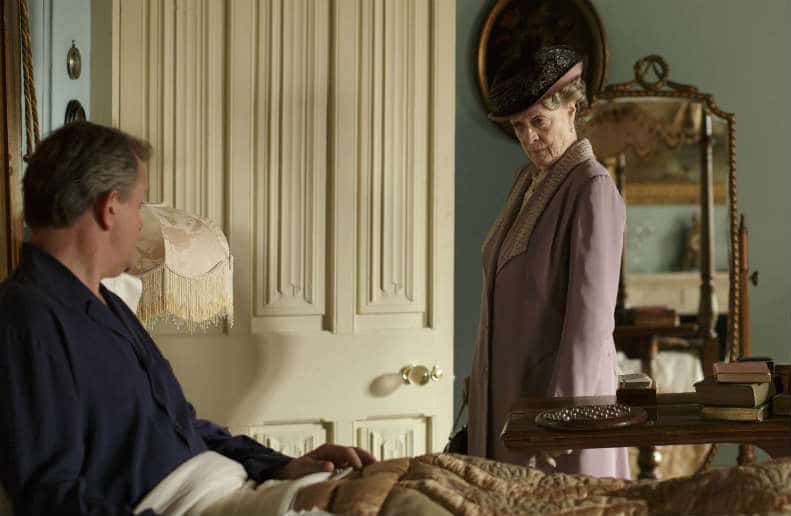 As this installment opens, Robert is home, resting more comfortably in his own bed with his family around him. Of course, much to his chagrin, he is forced to take things easier and Mary is going to take advantage of this. She tells Tom it’s best not to bother Papa with some of the tough decisions anymore.

On this particular morning, the family is engaged in a typical debate about Mary and Tom’s decision to open Downton to the public…

Before opening the house to strangers, Cora is invited to become the hospital board president. Even with Robert’s recent health scare, her mind is still set to modernizing the hospital. Because of her stance, she is offered hospital president. Knowing how this will ruffle her mother-in-law’s feathers, Cora keeps quiet about the news.

A Night out in London

Anna is due for yet another trip to the doctor (an expense Bates insists on paying for now), which gives Mary an excuse to see Henry. This time, Tom goes up to London with her. Along with Henry, the pair meet with Evelyn again and the war widows (Mary is NOT, which she makes certain everyone knows) gather, dressed to the nines, to enjoy a night out in the glittering city. 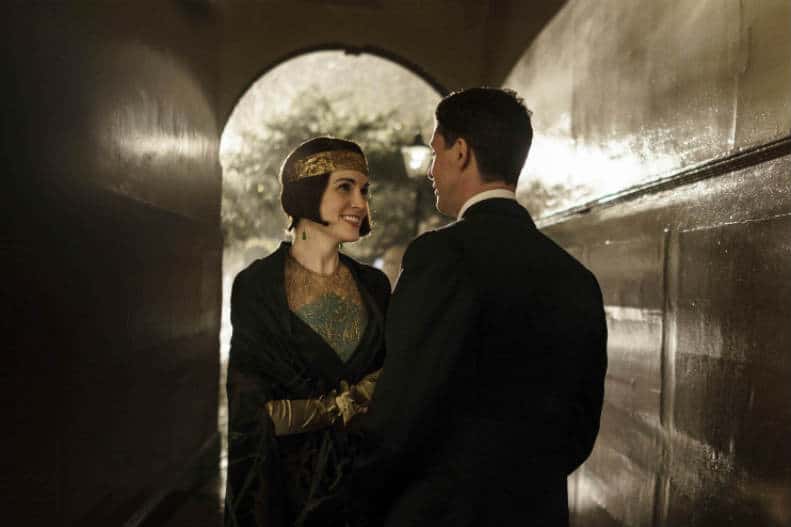 Post dinner and social chit-chat, Mary and Henry find themselves alone, walking the London streets. As all love stories are eventually prone to do, their walk gets sabotaged by a rainstorm. Ducking underneath a bridge to escape the pesky raindrops, Henry gives a small speech to Mary, playing his cards by saying, “My prospects are modest at best, and you, well, you’re a great catch. But you’re also a woman that I happen to be falling in love with.” Afterward, he plants a kiss on Mary. 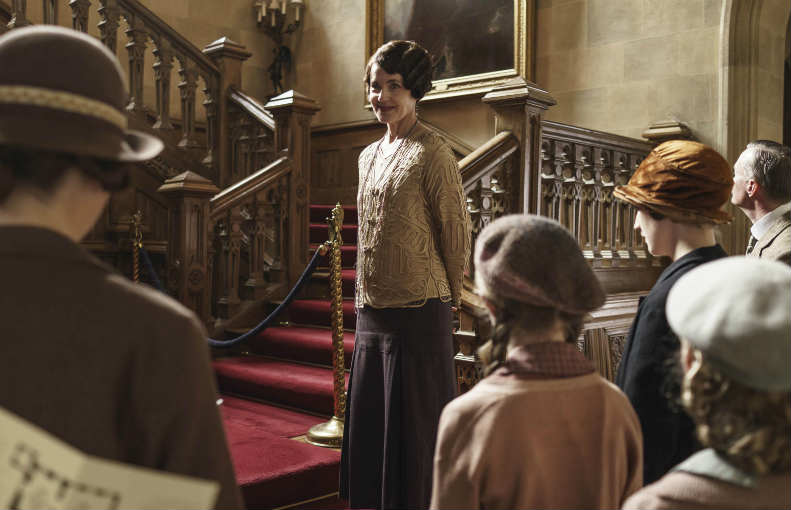 To aid in raising money for the hospital, Mary and Tom decide opening Downton’s doors to the public is an answer. Traditionalist as he is, Robert is against it, but of course, going against Lady Mary is fruitless. The plans already well under way for the open house to take place. Between Mary, Edith, and Cora, guided tours are part of the plan to retain some control and organization. Much to the household’s surprise, a long line of townspeople forms.

The comedy of this plan is, no one really knows the history of the house – or whether or not they need guides! Anytime someone asks a question, the family is clueless given their historian is off work this week. Fireworks happen when, during one of her tours, Violet verbally accosts Cora. You see, the sharp-tongued woman has learned she’s about to be replaced. What’s worse is, it’s by her daughter-in-law, who far as Violet is concerned isn’t right because her opinion is opposite of hers.

Though I’ve not talked about Isobel much this season, she has had some play. Mostly, her scenes are cluttered with hospital debates, and let’s face it, no one argues with Violet better than she. But last night, she had a more personal story introduced. The future daughter-in-law, Miss Cruikshank, of Lord Merton, Isobel’s former fiancé appears on the scene. She visits Isobel under the pretense of rectifying what her fiancé Larry did to sabotage Isobel’s relationship with his father. Her sweet attitude 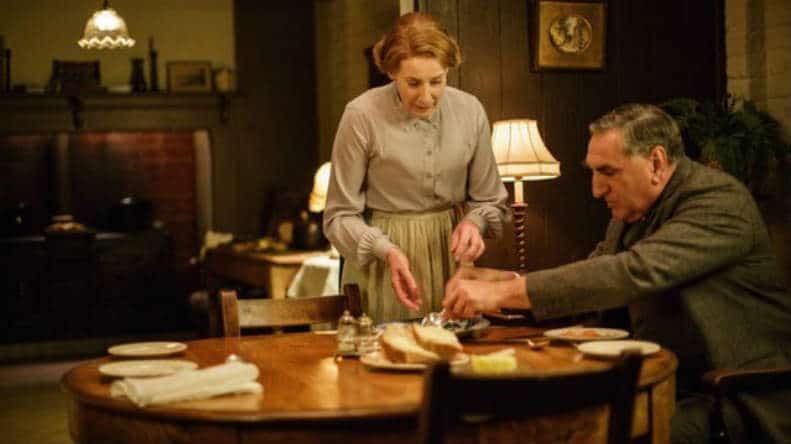 +Daisy’s prospects continue to improve with regards to her education. With the help of Molesley, she prepares to take an exam.
+Having learned what she believes to be quite a secret, Mary discreetly asks Anna what the servants say about Miss Marigold. Yep, the not-so-best-kept secret of Downton won’t stay that way for long.
+ The cooking trials at the Carson house continue. This hasn’t become a worn out plot to me, and is instead, quite a humorous bit of fun this season.
+ Thomas’ employment trials continue as Carson and Robert discuss his future.
+ Mrs. Patmore and Mr. Mason become even friendlier which pulls out the jealous side of Daisy!

+ Worried about opening their home to strangers, Robert wonders what would be so exciting to paying tourists.

“But what on earth can we show them to give them their money’s worth? Lady Grantham knitting?” With a chuckle, he continues, “Lady Mary in the bath?”

+ A conversation between Tom and Mary was the highlight of the night, merely because the execution and reactions were so hilarious. As Mary shares the latest on her romance with Henry, she admits that he has asked her to give cars another chance (she’s skittish due to Matthew’s death), and she admits she’s considering this.

“Who is this flexible and reasonable person? I don’t recognize my own dear sister, Mary. Could this be love?” Tom asks.

Mary’s sharped tongued reply is quick in coming, “Oh, shut up!” she exclaims to a grinning Tom.

+ Also memorable was Granny Violet’s entrance during the open house. Stumped on a question, Mary tries to dig herself out of knowing nothing about the house’s history by asking Violet about the library. “What else could I tell them about the library?” Mary queries.

“The library was assembled by the fourth Earl. He loved books” is Violet’s hurried reply.

In response to a touring resident’s question of “What else did he collect?” Violet quips, “Horses and women.”

Our romance-themed entertainment site is on a mission to help you find the best period dramas, romance movies, TV shows, and books. Other topics include Jane Austen, Classic Hollywood, TV Couples, Fairy Tales, Romantic Living, Romanticism, and more. We’re damsels not in distress fighting for the all-new optimistic Romantic Revolution. Join us and subscribe. For more information, see our About, Old-Fashioned Romance 101, Modern Romanticism 101, and Romantic Living 101.
Pin this article to read later! And make sure to follow us on Pinterest.
By Rissi JC on February 9th, 2016