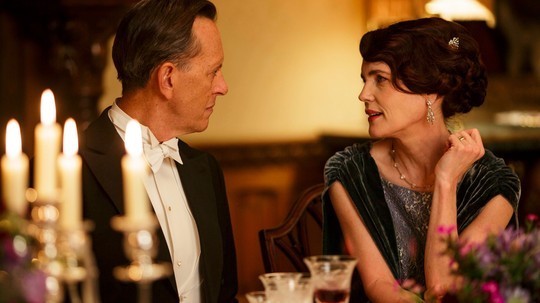 After last week’s drama filled premiere, the multitude of stories that are ripe for potential scandals and family disputes is endless. As suspected, some of that does play out in the follow up episode. Without further ado, let’s get right into the good and bad of episode two. 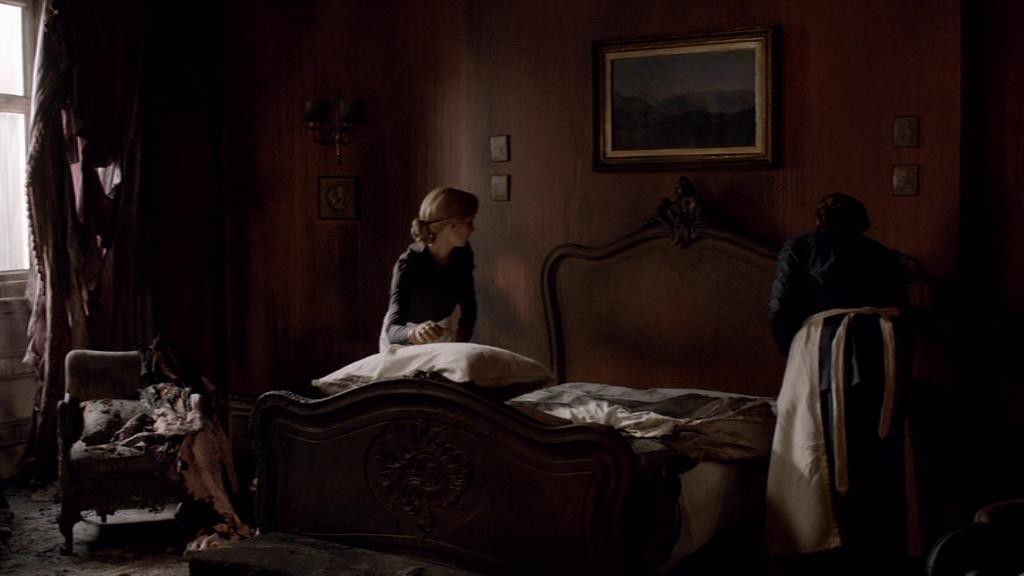 Following the fire at Downton Abbey, we realize that it isn’t as bad as anticipated. Anna and Mrs. Hughes, along with other members of staff, begin removing all the damaged goods in Edith’s room and attempt to salvage what they can. During their work, Anna finds the photograph of a baby Marigold hidden in Edith’s bedding which puzzles both women as to what the photo means or who it’s of. But respectful servants that they are, neither one question anything and keep to their duties.

The War Memorial + a Departure

Next up is the planning delegation trying to come to agreement on what and where they want the gardens and war memorial to sit. There is a suggestion to put it on the Crawley’s cricket field, which ruffles the traditional feathers of Robert. His traditions don’t mesh with the idea that their ability to use the field will no longer be accessible – as well as the years it took to get the playing course in the proper shape. Robert believes the best location is the center of their village. Carson and the rest of the committee disagree – they feel like the more peaceful locale is the better route where people from all over can come and enjoy the quiet to mourn and remember those lost to the war. Needless to say, this causes some tension between Robert and his faithful butler. It’s really quite funny to see them on an equal level where their options mirror more equality than perhaps Robert is used to.

On the flipside, one of the things I’ve admired and respected most about this television family is their treatment of their staff – it’s happened in years past when they’ve treated their staff justly but fairly and is again a big part of season five as regards to Baxter. (Her past was revealed last week, and heavens, does Cora have quite a decision ahead of her.) Bringing Carson around after more disagreements and discussion is seeing one of the villagers and her son taking a moment to remember their lost loved one in the heart of town. The committee comes around after this.

Jumping ahead before the next storyline comes into play, we watch as Thomas sees Jimmy off. The two got off to a rocky start (especially when Thomas developed a crush on Jimmy much to his disgust) though Jimmy became Thomas’ kind-of friend (if the guy is capable of being friendly with anyone). The two seem to part amiably after Jimmy’s unceremonious firing (Jimmy even thanking Thomas for being a friend after believing he’d never be friends with a man like Thomas) and Thomas is again left to his own mischief and continues to taunt Baxter as well as Mosley by revealing Baxter’s past. Downstairs, the servants express sorrow over the hole left in their staff as Mosley frantically tries to live up to his duties as the only footman now left in the house – and he has his eye on receiving the position of first footman, which he asks Carson about. Poor, poor Mosley. This guy cannot seem to catch the break he deserves among the Downton staff. Carson’s brusque reply to Mosley’s inquiry about becoming first footman is this: “You are the only footman. You are first, second, third and last. Make what you will of it.” Things get interesting with this ascension! 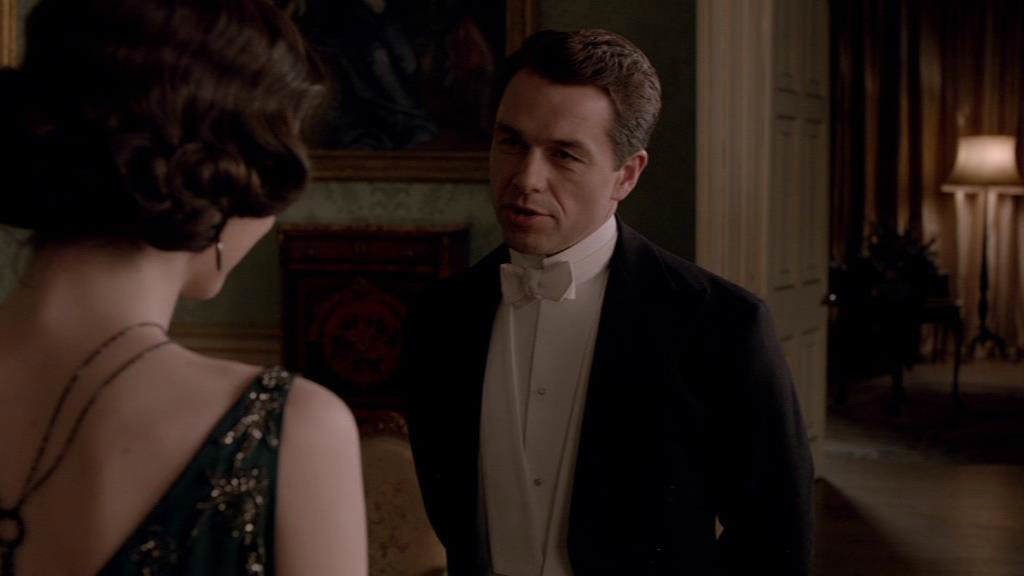 As the family – along with Isobel, chat about daily life (including young George whom Mary boasts as being “sweet”), the war memorial and the fire, the topic of Mary’s trip arises. Her plans are to leave beginning this week and on a random thought: was it just me or did Tom have a suspicious look as to whether or not what Mary says of her plans are true!? Later on she and Anna make the necessary arrangements for her trip. Ever loyal to her mistress, practical Anna thinks ahead by packing things that are easy for Mary to take on and off. This gets a smart response from Mary: after all, she’ll have “[Tony’s] help to undress.” Also awkward for the two of them is Mary’s request. Not wanting any unexpected consequences to her tryst, she requests that Anna buy a contraception device (one that she read about in her book) to ensure there is no child. Anna is of course aghast at this and requests that she not be made to buy it. Unfortunately, the logic of sending Anna is that she’s married, whereas Mary purchasing anything as a widow would raise eyebrows. Before Mary leaves, Anna goes to the drug store where she does indeed awkwardly (this scene is amusing I do have to admit) buy the item – the woman cannot get out of the store fast enough. She leaves the clerk baffled as to why a married woman would take any sort of preventative measures. I’m siding with Anna’s sage advice she gives Mary: she tells her mistress she’d best hope she doesn’t ever write a memoir! Oh, the secrets Anna could tell.

Before Mary leaves, Charles attends a dinner at Downton. While visiting, he’s sure he isn’t the winner of Mary’s affections and tells her so. Fond of him, she confirms this to Charles Blake, who seems to take it in stride. If I’m being honest, I do have to say I rather like the bloke. Tony is a decent sort also, but Mary’s claim that she’s just now coming out of the “mist” and is leaning towards Tony is not flying with me. She’s more excited about the idea of romance and a future than she is certain this is where her heart lies. One thing is for certain, I’m glad she’s resolute in her belief she can love again. 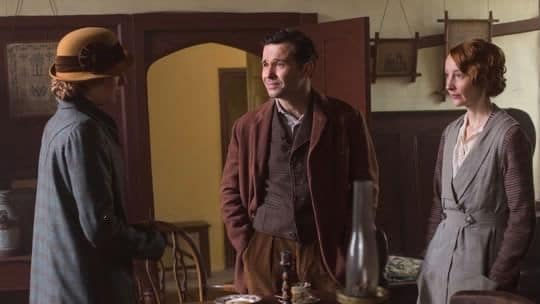 Ready to put the plan into motion that she, along with Mr. Drewe schemed, Edith and he present their idea of her possibly being a godmother to little Marigold. This way she’d want for nothing and would have only the best schools to attend with Edith as her benefactor. Mrs. Drewe is not pleased with this idea since she considers herself Marigold’s mother in every way but having given her life. Taking this idea to her family, Edith requests their advice as to whether or not it would be right if she were to take a more hands-on approach to caring for Marigold. She gets little resistance from anyone leaving her happy to take on the care of a young “orphan girl” (the way that the Crawley’s see Marigold) and she begins her easily explained quest of seeing Marigold grow up. Only Mrs. Drewe conflicts the notion, along with the idea that Edith only takes a shine to the girl in order to use her like a kind of “doll” to dress up and show off when she pleases.

Rose’s Cause and a Murder Mystery

I realize I didn’t much discuss Rose in last week’s recap, but she has really come a long way this season. She’s more settled, mature and far less flirty than she once was. Her crusade this year seems to be helping the Russian refuges who have been displaced from their homes. Her idea of daily life is all about “shopping and dancing” and seeing friends, yet her compassion for these people goes beyond what she even realizes and it’s really nice to see.

As the episode closes, the arrival of a local police inspector again brings up horrific memories. That of valet Mr. Green whose visit with his employer (last season), Gillingham resulted in the assault of Anna and later his mysterious death. Now the police have returned to Downton with questions and the surprise announcement – wait for it – there was a witness to Green’s death. 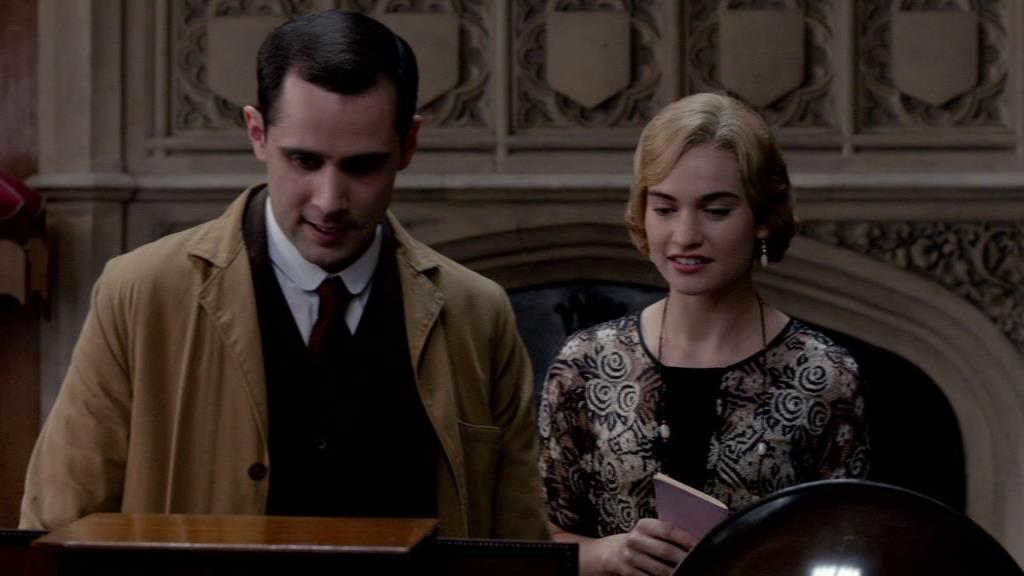 Our romance-themed entertainment site is on a mission to help you find the best period dramas, romance movies, TV shows, and books. Other topics include Jane Austen, Classic Hollywood, TV Couples, Fairy Tales, Romantic Living, Romanticism, and more. We’re damsels not in distress fighting for the all-new optimistic Romantic Revolution. Join us and subscribe. For more information, see our About, Old-Fashioned Romance 101, Modern Romanticism 101, and Romantic Living 101.
Pin this article to read later! And make sure to follow us on Pinterest.
By Rissi JC on January 12th, 2015