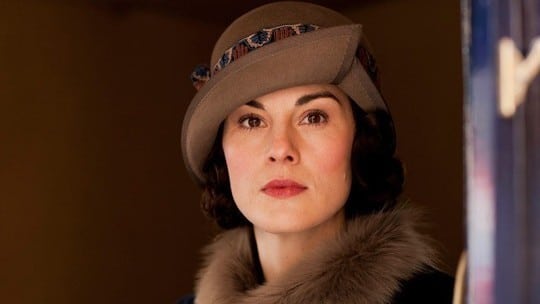 Beautiful costumes, great casts and characters aside, one of Downton Abbey’s downfalls is its need to repeat so many plotlines. Branson has been considering a move to America for years now (or it seems that way) and the poor trials of Bates and Anna continue. Then there is the ushering in of loose morals (thanks to the 20’s freer lifestyle), plus some fateful words that could be the end of the life of one good person. But, first things first, we begin with the loose ideals which is where this episode starts. Let’s jump right into the particulars of last night’s episode. 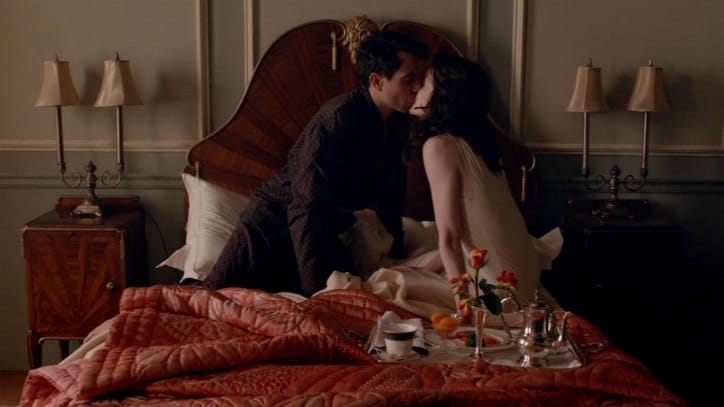 Despite the sage advice of Anna from last week or the moments of indecision that flickered across Mary’s face when she met with Gillingham, things push ahead. In fact, there is not a shred of doubt as to whether or not the rendezvous happens or what goes on behind closed doors in those adjoining hotel rooms. The episode opens with the pair of them sharing Mary’s bed talking about their wonderful week and Mary’s plans to return home. Tony protests Mary leaving, citing that he wants to know everything there is to know about his lover. Even down to how she applies her makeup. For her part, Mary apparently wanted to know if she fits with Gillingham on some level since she went through with this week. He proposes again and seems quite smitten with Mary – almost as if he’s ready to marry her now, only Mary is reluctant. Taking a sideline, I have to interject this is the first real issue I’ve taken with this season (thus far). I’m not too keen on Mary’s gallivanting.

I admire Mary’s decision to marry well in that she wants to love her second husband every bit as much as Matthew (even if it is in a different way) and that divorce is not an option for her. I do not respect her in her assumption that promiscuous behavior is going to give her those answers. Still in her room, what happens next is in true Mary fashion. The look on Mary’s face, after kisses and full of the happy prospects Mary and he are headed to the alter, just after Gillingham leaves her room is quite telling. 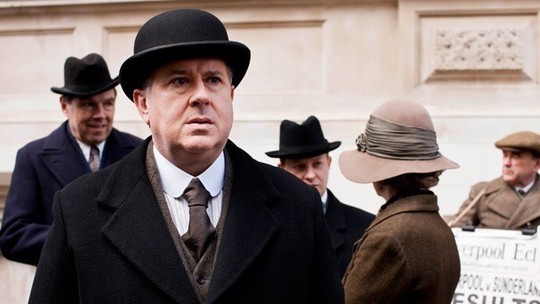 Thanks to Spratt, Violet happens upon the information that Mary was most definitely not travelling the countryside with her girlfriend sketching. No, she was spotted by Spratt leaving the hotel along with Lord Gillingham. Once she regains herself, Violet is able to recover nicely with an excuse that her granddaughter was at a land conference. Soon as Mary is home, a phone call beckons her to take tea with Violet and the next day, Violet learns about Mary’s tryst. The two disagree about the times they live in and whether or not it was proper for Mary to do what she did. Violet’s philosophy is that a lady would never feel attraction to a man until given permission from her mama. Mary doesn’t see error in her ways since she wasn’t coerced into doing so. Her grandmother takes a much different, dimmer viewer: it’s inappropriate for the daughter of an earl. Period.

Sad news arrives for Mrs. Patmore regarding her nephew Archie. A young man once employed at Downton Abbey, Archie suffered from what we’d now diagnose as PTSD following his service. As a result, he committed suicide. This turn of events means that Archie is being excluded from his local village’s own memorial. Mrs. Patmore becomes inspired to approach Mrs. Hughes in the hopes she’d ask Carson to allow Archie’s name to be added to the memorial – she believes Archie’s service needs to be recognized. Carson is aghast at this request (adding the name of a “coward” is dreadful to him), though the notion goes a step further when Robert notices Mrs. Patmore is troubled. Carson brushes it aside as information Robert does not need. Sad though it is, it’s nice to see Mrs. Patmore get a story since she’s one of the nicest members of staff at Downton and one reason being what comes later in the episode. Ironically, this is also the more contentious scene of the season thus far. 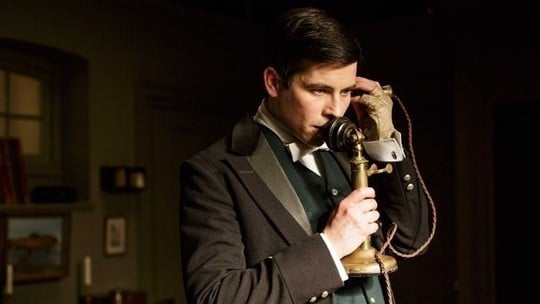 Downstairs also gets a new confusing element to wonder about when Thomas answers an ad in a magazine, requests days off under the guise his father is ill (in reality, Thomas never liked his father, a man we’re told was cruel to his son). For the rest of the episode, Thomas is missing from the abbey. What could this schemer be up to!? 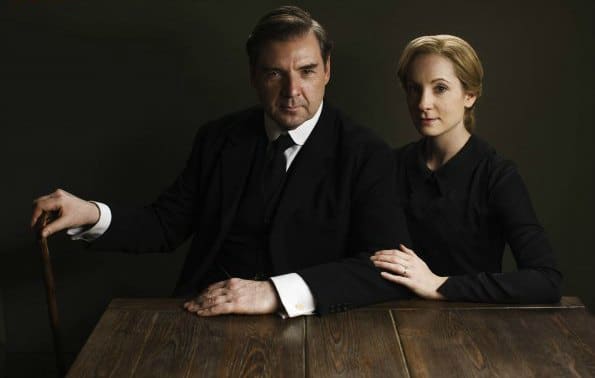 Downton gets another visit from the Inspector with more news on the investigation into Green with news that the witness claims he uttered the words, “why have you come?” just prior to being pushed into the line of oncoming traffic. And, with that, an inquiry to interview Mr. Bates whom witnesses claim didn’t like Green. This puts Carson in quite a position. Remember he doesn’t know of any reason Bates wouldn’t like Green – very few people know Anna’s secret and those that do (Mrs. Hughes, Mary and Bates) are certainly not going to turn on her. All Carson knows is that Green was in high spirits during his stay and not at all conformed to the proper way of doing things. This is why Carson is so puzzled when he learns Mr. Green claimed to Gillingham he was mistreated while at Downton.

Carson’s conferring with Mrs. Hughes confirms his thoughts and for the moment, the matter seems to be dropped; Mrs. Hughes does recount the news as she knows it from Carson to Bates and Anna’s worry spirals more out of control. The day arrives when Bates is interviewed by the inspector in which he recounts his day of the murder and all he was doing that day. It consisted of errands, meals and walks according to him. The information is relayed to Mary when she and Mrs. Hughes surmise that Bates could have made the trip and been back in time. 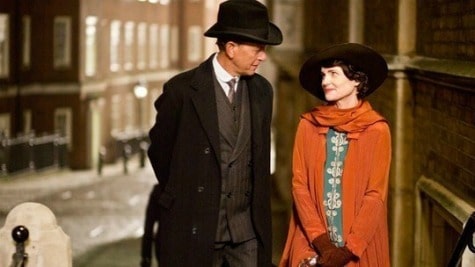 Cora takes a trip to London to see an art gallery and is accompanied by the flirtatious Mr. Bricker. Once lingering in the galleries and conversation has wasted away their afternoon, he takes Cora out to show her a night on the town. Already feeling needless (compared to the days when war kept her busy and having a purpose rather than merely a lady of leisure), Cora enjoys her night out. Upon her return to Rosalind’s, she discovered Robert has come up to London to surprise his wife with a night out. The two quarrel and though Cora did nothing untoward, Robert’s jealously blinds his ability to listen to reason.

As this sequence of events draws to a close, Violet’s own past creeps up again in the form of a former acquaintance. While Rose is hosting a tea for the Russian refugees at Downton, a man from Violet’s days in Russia with her husband is among their group. As it turns out, Violet was quite admired in her day as the young Lady Grantham, particularly by Prince Coragan. Mary’s comment of it being a good thing Papa and Aunt Rosalind were already born or else they could spin all sorts of “fairytales” was brilliant and so very Mary-like. Granny’s past is one that is actually more cliché than not, although it does create a kind of understanding between Mary and her grandmother which makes for interesting television at the very least.

What do you think of Downton Abbey three episodes in? Sound off in the comments!

Our romance-themed entertainment site is on a mission to help you find the best period dramas, romance movies, TV shows, and books. Other topics include Jane Austen, Classic Hollywood, TV Couples, Fairy Tales, Romantic Living, Romanticism, and more. We’re damsels not in distress fighting for the all-new optimistic Romantic Revolution. Join us and subscribe. For more information, see our About, Old-Fashioned Romance 101, Modern Romanticism 101, and Romantic Living 101.
Pin this article to read later! And make sure to follow us on Pinterest.
By Rissi JC on January 19th, 2015