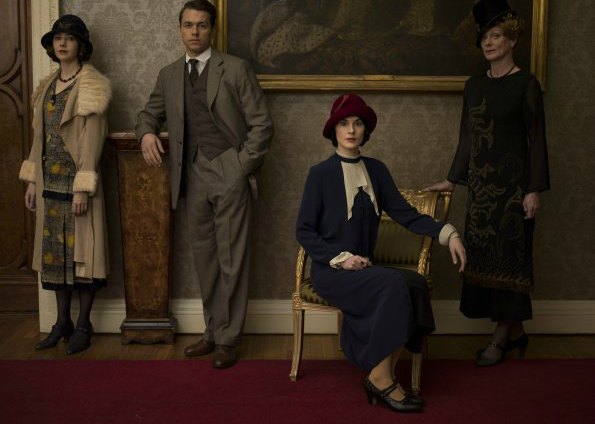 With last night’s episode, the halfway point has been reached in the fifth season of Downton Abbey. It’s nearly impossible to recount everything that has happened and writing these recaps has awed me all the more – the writer’s pack a lot of topics and events into one hour. My goodness, they do so with a sense of breathless wonderment that is distinctly Downton Abbey. The fourth installment only further cemented that.

After those mysterious phone calls, Thomas returns to Downton with a pallor that gets worse with each passing day. He doesn’t carry out his duties with the same kind of precision as he usually does, and Baxter hears him through a door as if he’s in pain. Opening the door to her knock, she catches a glimpse of what’s going on inside (she sees needles), only Thomas doesn’t allow her entry. He is the one who’d rather have the power and knowledge instead of confide in anyone. He’s not about to tell anyone his troubles or appear weak.

Later on, Baxter mistakenly manages to get a hold a piece of Thomas’ mail and learns what he’s likely been doing to himself. Clearly still angry over her snooping, Thomas tells her to leave him be.

Violet’s Confession and a Proposal

Violet and Isobel’s lives are changing drastically, not just the young people. Violet visits Prince Kuragin at the soup kitchen Rose helps run, which leads her to confess something to her cousin. The prince asked her to run away with him in their youth. Coming from the stiff upper lips of Violet, the dowager of Grantham, I must say this was a surprise as is the entire storyline. It does nothing but perhaps bring “down” Violet’s prestigious status a tiny bit. Personally, I really think it should have been eliminated, considering all the other similar lines that crop up this season. 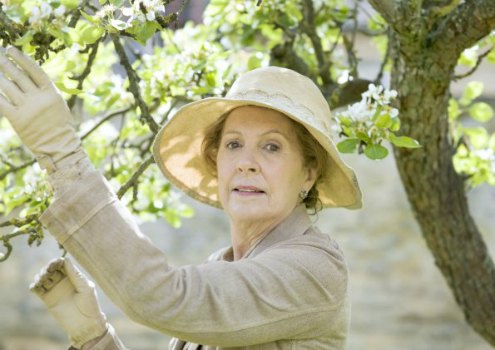 Isobel too has a secret from the family (save for Violet) involving her future. Lord Merton has just offered her the most sincere marriage proposal – one that isn’t about safety or companionship. No, the man is genuinely in love with Isobel and can think of no greater honor than spending the rest of his days with Isobel. (Side note: this is a love story I do and can get behind.) Their conversations and the proposal he honors Isobel with is poignant, and though Isobel is of the independent sort and we’d expect nothing less, I almost wish she hadn’t asked him for time to consider. Go for it, Isobel – you know he does care! 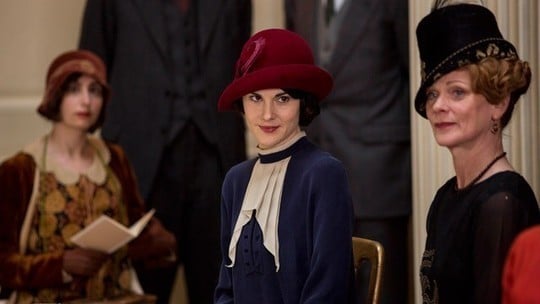 London is putting on a grand fashion show that finds Mary travelling to attend with her aunt. While there she plans to set the record straight with Tony about where her heart is leading her. Instead, she runs into Charles Blake again and on his arm is Mabel Lane-Fox, the woman Tony spurned for Mary. Things get less awkward and more heated before Mary returns home, though first she spends the evening with Charles. While dining with him, he tells her that he was never the type to die of a broken heart. In turn, she tells Charles she hopes Tony adopts the same attitude as Charles. Elsewhere, Mary confides in Charles that she does care for Tony – she wants him to be the godfather of her children just not their father. The one thing Charles tells Mary, “I wish I could work you out,” is the one thing we all wish. You’re not alone Charles. 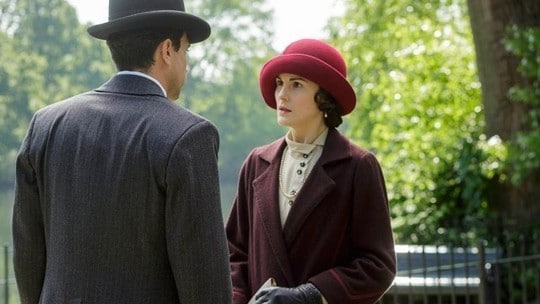 Following their romantic week together – in which the three little words were exchanged – or so Tony says as he listens to Mary tell him off. He isn’t about to go down without a fight. He expresses frustration to Mary over her rejection of the proposal he again gave her while they spent their days and nights together. Breaking the news to Tony face-to-face seemed the better choice. She has to tell him it’s not going to work between them, yet Tony is angered that Mary would go to bed with him without accepting his proposal. He believes the two of them can work it out and figure this stumbling block out – he plans to put a ring on Mary’s finger no matter what.

One might assume a family dinner would evoke happy thoughts, but nope, no such thing in this case. There’s another dinner party at Downton and Sarah Bunting is invited. Also being entertained at the estate is Bricker as well as cousin Shrimpy (more on him later on). During dinner, Miss Bunting manages to again spark a debate. This time the conflict of interest revolves around Robert not knowing what Daisy’s name is following talk of her pursuing education. Sarah wonders whether or not it’s the Crawley’s stance that servants should further their education. Robert assumes one position (that the studies are disrupting the flow of the day from Mrs. Patmore’s own words – which she spoke in anger, and Daisy is unable to get to her work as a result). This is a stance that prompts Sarah to challenge him to ask Mrs. Patmore (and Daisy) directly as to the truth of whether or not their days are disorganized. Not about to back down from a challenge (something his mother utters he’ll regret), Robert sends Carson after the two. Proud of Daisy’s studies, Mrs. Patmore does not confirm Robert’s opinion and raised well enough to graciously admit to his wrongs, he concedes to Sarah. He concludes by saying he’s pleased the lessons have been successful and assumes there’s an end to the discussion. 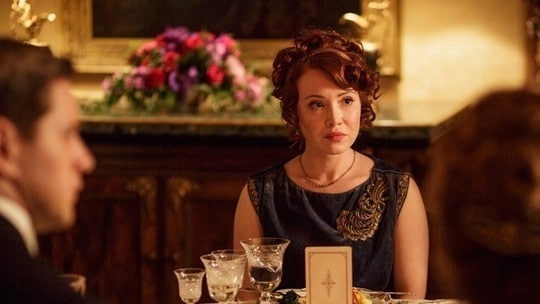 Miss Bunting is not so gracious. She instead asks if her point has been made in response to Mary’s exclamation to let it go. This sets Robert off – he storms from the room in a fit of rage, yelling that the only thing he passionately would like (in response to Sarah’s accusation he’d like servants to remain in their place from cradle to grave) Sarah to leave his house and never return. Fortunately for her, Sarah does look properly chastised. I am sorry, but this character is SO not the right woman to make Tom open his heart again. She’s more annoying than she is endearing. Robert may be close-minded to modern ideals, but Sarah was in the wrong to keep pressing. The woman doesn’t know when to take a win and stop. This coming from a woman who likes to make everyone think she’s smart and educated?! Ugh.

Later Robert does apologize to Tom, only he also sadly confesses he feels as if Tom is pulling away from them. It’s a sincere thought. Since their rocky start, these two have come to a better understanding of each other. 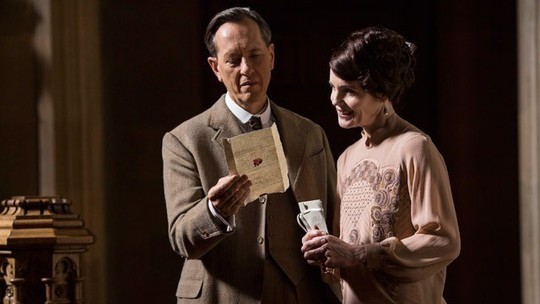 Rose’s father, “Shrimpy” as he’s known, returns (Robert’s cousin-in-law) to Downton following an appointment to India and arrives under a cloud of rumors that he and Rose’s mother, Susan are going to divorce (a disillusionment that will likely end his career). Robert is actually related to Susan, leading Mary to wonder whether or not they’ll welcome him in the future, though both Robert and Violet claim they won’t take sides. Somehow in spite of their impartial claims, the head members of the Crawley clan readily accept Shrimpy. Shrimpy expresses thanks to Robert for keeping Rose away from this ugliness.

Rose and her father share a poignant scene, and she asks if she can live with him, only he feels it best Rose continue to live with the Crawleys. Since she’s come out, Rose realizes that her father probably expects a marriage. Rose isn’t about to marry unless she’s totally in love she tells her father. And, as of yet, we’ve not met the man who will steal Rose’s heart. From my perspective, he’d better be a good man for reasons that should be self-explanatory and also because Rose is a dear. I’ve so enjoyed her character this fifth year spent at Downton.

Also playing an important role, is Shrimpy’s search to find Prince Karagin’s wife, the princess. The pair of them were separated during the refugees moves and he doesn’t know if she’s alive or gone.

Opinions, please! It’s your turn. What did you think of episode four? Are you a fan of Sarah Bunting or do you, like me, hope this was the last we’ll see of her? Share anything comments you have.

Our romance-themed entertainment site is on a mission to help you find the best period dramas, romance movies, TV shows, and books. Other topics include Jane Austen, Classic Hollywood, TV Couples, Fairy Tales, Romantic Living, Romanticism, and more. We’re damsels not in distress fighting for the all-new optimistic Romantic Revolution. Join us and subscribe. For more information, see our About, Old-Fashioned Romance 101, Modern Romanticism 101, and Romantic Living 101.
Pin this article to read later! And make sure to follow us on Pinterest.
By Rissi JC on January 26th, 2015