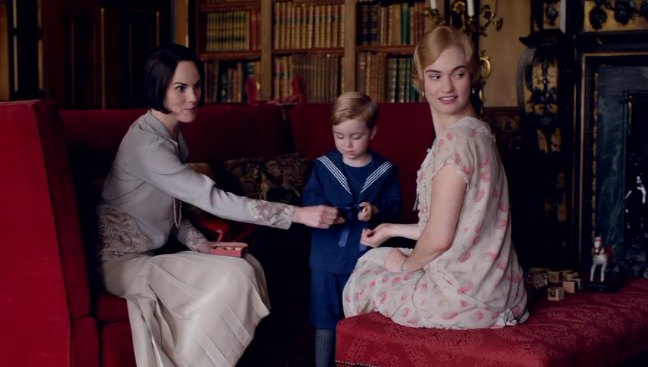 In the next-to-last episode of Downton Abbey’s fifth season, there is plenty of soapy drama, though surprisingly, very little of it is directed towards Mary. Lest you think otherwise, there are still plenty of “oh my, gosh” reactions to be had.

A Family at Home 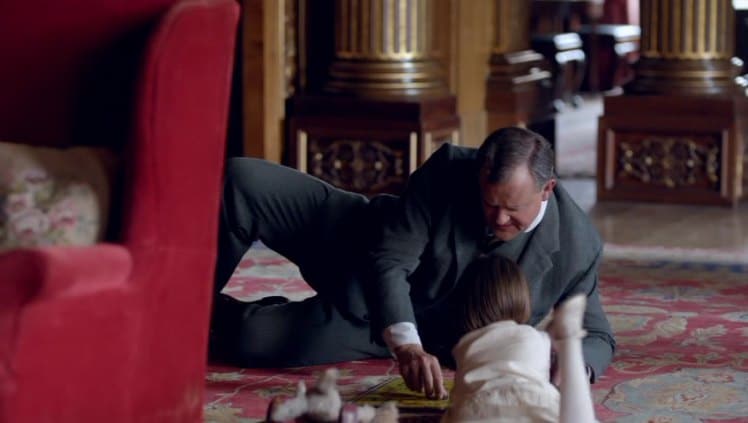 Following the engagement of Rose and Atticus, plans are put into motion for a London wedding. Because of their different faiths, Rose makes plans to go about things a bit differently, which ruffles some feathers. She arranges a marriage in the registry office with a church blessing to follow. Before the family leaves for London (where they’ll meet up with both sets of parents), the ladies help Rose pick out her trousseau. Then, the family enjoys some quiet moments with the grandchildren and “Donk” tries to teach Sybbie the proper rules of a board game. Meanwhile,  Mary and Rose discuss her future mother-in-law being her ally against Lord Sinderby while Edith and Tom discuss Tom’s leaving to help his family in America expand their car dealership business. 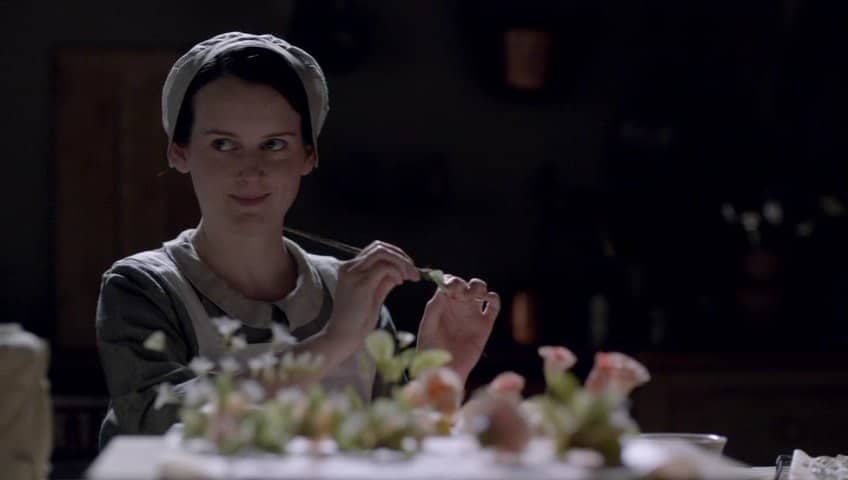 Daisy believes it’s best that she leave Downton to pursue her dreams of something beyond life in service. Molesley and Mrs. Patmore are especially saddened hoping Daisy would change her mind,  as Mrs. Patmore views Daisy as a kind of daughter. Though Daisy’s mind seems made up as she says, “London is full of possibilities. Sometimes I think my life has no possibilities at all. I feel as if I’ve been down a coal-hole and someone’s opened a lid and brought me into the sunlight.” But when confronted with the idea of leaving, Daisy does seem to back off the notion.

Meeting the Parents and Atticus’ Indiscretion

Atticus’ father still hasn’t warmed to his son marrying a woman with little care for religion (or his idea of religion) and Rose has challenges of her own. Her mother arrives to the London home along with Shrimpie, and despite being separated from her mother for a long time, Rose is happy to see her. Susan, however, is not so gracious. Even Rose’s request that she behave around Atticus’ father, a man who cannot bear this wedding as it is, doesn’t work. In fact, Susan is anything but gracious. 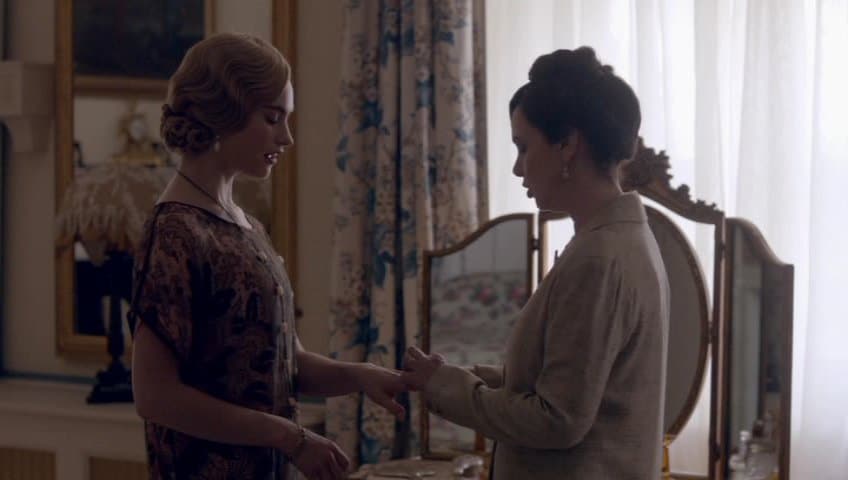 Before the parents meet at a dinner hosted by the Crawley’s, Rose asks her parents to put up a happy front until after the wedding. But alas, neither family makes a very promising impression on the other. At the dinner table, Lord Sinderby expresses his distaste of divorce unaware of Susan and Shrimpie’s marital troubles.

Leading up to the wedding, the nearlyweds are treated to some fun. Atticus has a stag party where he is propositioned by a woman. To his credit, he turns her down. But persistent thing that she is, she appears at his door, enters his room, stays long enough to show a bit of skin and is gone as fast as she appeared. Next morning, Rose enjoys being treated to a day of shopping and lunch by her cousins (Mary, Edith and Tom). Lovely day they are having too until an envelope with photos show up at her table: inside are compromising photos of Atticus and another woman. In tears, Rose sets off to find out the truth with Mary trailing behind.

Atticus and Rose Say “I Do.”

Before the marriage can go ahead with our two love birds, some things have to be set right. Rose and Atticus meet in the park and are able to hash out the misunderstanding. Rose believes Atticus engaged in nothing untoward and all seems right in the world. Prior to this, Atticus confronts his father, assuming he had something to do with the scandal. Behind-the-scenes, Shrimpie gets to the bottom of it: Susan is the one who orchestrated the photos without anyone’s knowledge. He begs Susan to behave for Rose’s sake. But she’s not content with that. On their wedding day, Susan gives up the appearance she and Shripmie are happily married and announces their impending divorce. Lord Sinderby’s response is much the same as his earlier opinions were: “Divorce signifies weakness, degradation, scandal, failure.” But Lady Sinderby smooths his ruffled feathers before Rose finds out, keeping the wedding on track.

Prior to the vows, Rose has a nice heart-to-heart with her father and we get the impression she knows (without knowing) her mother was behind the attempted sabotage. Her mother seems to have done what she did for “love” and Rose smartly tells her they have different definitions of the word. Still, nothing seems to damper the day. Rose and Atticus exchange vows with those closest to them in attendance, and afterwards, a lovely reception is put on. 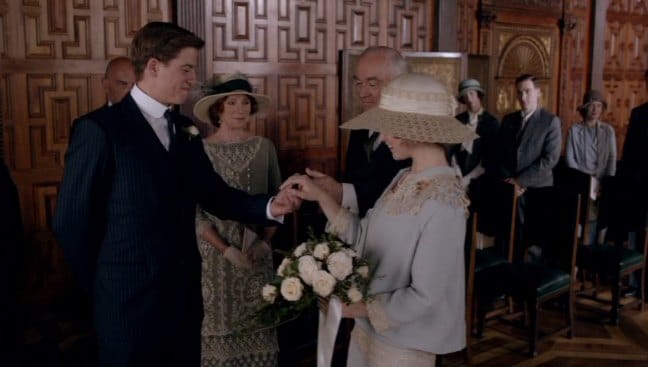 At the reception, Mary sees Tony and Mabel. They tell her they’ll be married in December and Marry lets Tony know he was just what she needed when she needed it. Tony returns that the one thing he does know is not to mess with Lady Mary Crawley. That’s right Tony, you tell Mary! Later, Mary sneaks away from the party and she and Carson share a rare moment together, one that is indicative of the seasons we all go through. Mary tells him she feels as if, “Our household is breaking up. But I suppose that’s what happens. People grow up, and move away, and things change.” 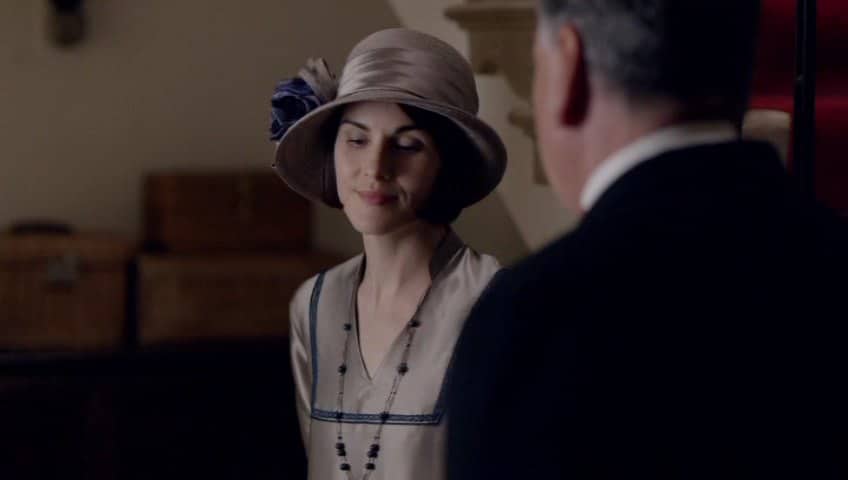 Carson tells the Bates that Sergeant Willis again wishes to speak with the couple and yet through it all, the couple seems devoted to one another. Baxter continues to offer to provide Bates with what he needed most (an alibi), the couple decides time off and a visit to some properties is in order – they’ve plans to run a small place of their own eventually. Those plans quickly nosedive and take an unpleasant detour. Anna is asked to be part of a line-up at Scotland Yard furthering the police’s case against the Bates. and the witness who claims to have seen Anna. 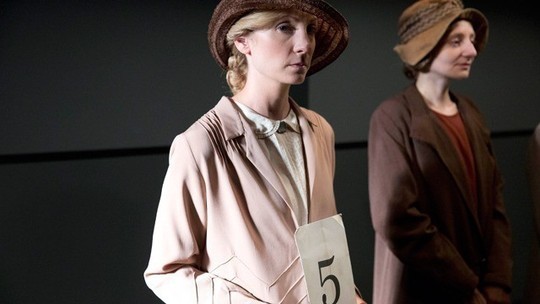 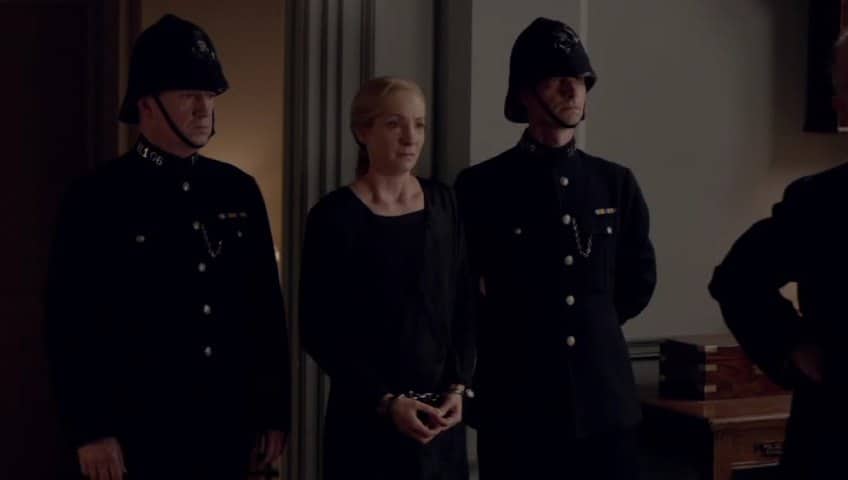 Furthermore, after the line-up, Anna is allowed to leave, but in true Julian Fellowes fashion, he has to max out a subplot. Anna is arrested on charges of murder shortly after her line up. I have to vent: I am not happy with this turn of events. Not happy at all.

Back at Downton, the war memorial ceremony takes place. Most of the staff including Mrs. Patmore is in attendance paying homage to the fallen heroes. Following the memorial ceremony, Robert takes Mrs. Patmore aside to show her the smaller, private memorial he had built for Archie. It means a great deal to Mrs. Patmore who seems to take comfort in having a place where her nephew can receive some respect. 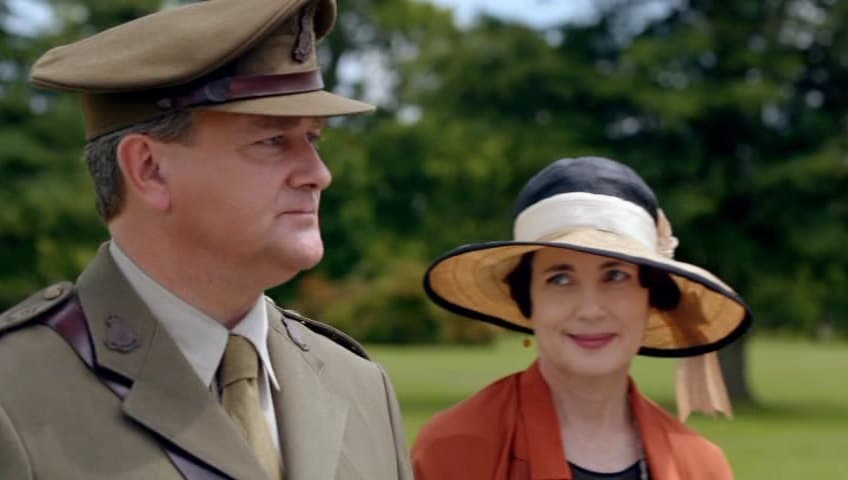 As the family and their loyal staff walk back home, we learn Tom is still planning on leaving. Something Mary is having a difficult time of, I may add. She tells Tom he’s to blame should he read in the papers that Mary is on trial for murder. (This is referring to her tumultuous relationship with Edith.) Cora and Robert discuss the memorial. Robert discovers – quite on his own, that Marigold is not just a ward Edith has taken a shine to: she’s her daughter. Cora asks him to let it be, saying it’s Edith’s secret and that’s how she wants it. Much to his surprise, Robert admits to Cora that he rather thinks he will love Marigold as his granddaughter.

What did you think of episode eight? Is there anything you hope will be resolved in the season five finale? Share any theories or thoughts below.

Join me again next week when I recap the season finale, “A Moorland Holiday.”

Our romance-themed entertainment site is on a mission to help you find the best period dramas, romance movies, TV shows, and books. Other topics include Jane Austen, Classic Hollywood, TV Couples, Fairy Tales, Romantic Living, Romanticism, and more. We’re damsels not in distress fighting for the all-new optimistic Romantic Revolution. Join us and subscribe. For more information, see our About, Old-Fashioned Romance 101, Modern Romanticism 101, and Romantic Living 101.
Pin this article to read later! And make sure to follow us on Pinterest.
By Rissi JC on February 23rd, 2015