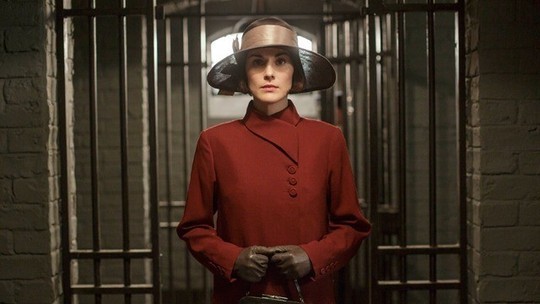 After the trauma of episode eight, there is a lifting of the “burden” in this, the finale of season five. Most of it is good mixed in with some bittersweet tugs on our heartstrings. 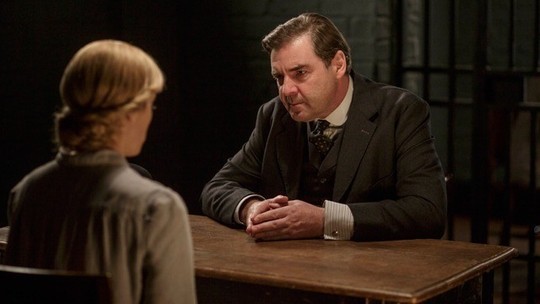 We open with a stark reminder: Anna is in jail. It isn’t just the bars that remind us, it’s the visual image of Lady Mary visiting her ladies maid. Having been arrested on the testimony of an eyewitness, Anna is more worried about the press learning Mary was visiting her in prison than clearing her own name. Mary brushes aside her concern without a care as she’s prone to do. She seems proud to support Anna no matter where it may lead – Bravo, Mary! This doesn’t stop trusty butler Carson from worrying over the message Mary’s visit may send. Bates is naturally beside himself. He fears for his wife and as such he has no plans to attend the family on their upcoming visit to the place Rose is calling home… 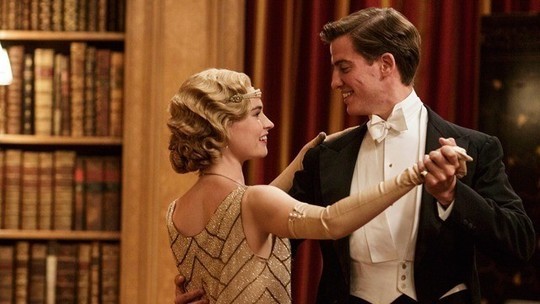 It would seem a visit to spend a holiday with Rose’s in-laws is in order. The Sinderbys have taken Brancaster Castle in Northumberland for their holiday. With them, the Crawleys bring Barrow to serve as Robert’s valet (since Bates needs to remain behind with Anna) along with Baxter to attend the ladies. The entire family, minus the children, pack up their motor cars, head to the train station and bid Isobel and Violet goodbye, they’re off to spend the holiday with the family. Once they’ve arrived, things get very interesting. Tom is ill-treated at the hand of the starchy butler who resents his rise in station. This irritations Mary, prompting her to plant the suggestion to Baxter that she and Barrow play a trick on the butler to put him in his place. Thomas comes up with something that temporarily puts the butler in his place, but also embarrasses Thomas, which will not do.

Suffering from some chest pains, Robert is forced to admit the truth to his wife when she questions him about his secretive nature. Worried about his health and what it could mean, Robert takes the opportunity to tell Edith the truth: he knows. He asks her to tell the family about Marigold, but that they keep it to themselves about who the child really is. Edith breaks down, asking for her father’s forgiveness and the two have an emotionally charged moment as father and daughter – something Edith rarely gets and was sorely needed.

Later on, Thomas (unbeknownst to Mary) takes his trickery a step too far when he learns one of Lord Sinderby’s greatest secrets. He has a child out of wedlock. Thomas anonymously arranges for the child and his mother to join them and quick thinker she is, Rose (who by the way is adorable with Atticus) saves her father-in-law from embarrassment by claiming to be friends with the woman. Later, Lord Sinderby thanks Rose and Robert wisely tells him Rose will love him forever if he’d let her. It would seem Rose is going to get on splendidly with her in-laws. 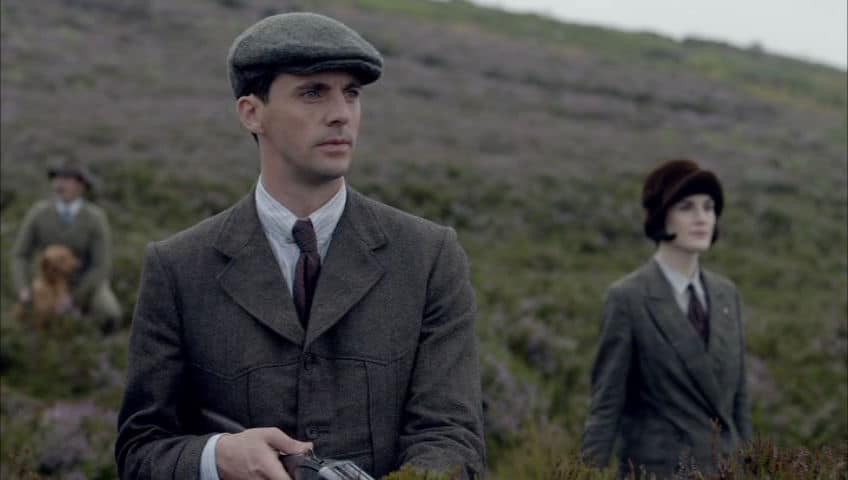 During their stay, there are shooting parties organized and Edith manages to enjoy herself. She strikes up a nice conversation with a fellow guest (do we detect Edith beginning to open her heart to the possibility of love?) and then there is Mary. She meets and becomes intrigued with a new face in the picture for what we can assume is a potential new love interest. His name is Henry Talbot (played by Matthew Goode). They spend the day in each other’s company and of course that night, they share a dance. Henry’s real sport though isn’t shooting, it’s fast cars, something Mary leans when she bids him farewell. Given the way Matthew died, I would coin this as quite ironic. Make you wonder, what, if anything is coming down the pike with this plot!?

During their holiday, Bates writes a letter of confession to free Anna and disappears. Gone for many months, Anna’s release is secured, but she is hurt it came at the loss of her husband. Mosley decides to help in any way he can along with Baxter and after months of pub visits, the pair of them find the pub where Bates lunched the day of the murder, proving irrevocably he did not commit the murder.

Also, when the Crawleys returned home, Robert went to the physician to be diagnosed. Turns out he isn’t suffering from heart attack symptoms, just an ulcer that can be treated with diet… and proving difficult for him, limited alcohol consumption.

The Crawely Siblings at Christmas 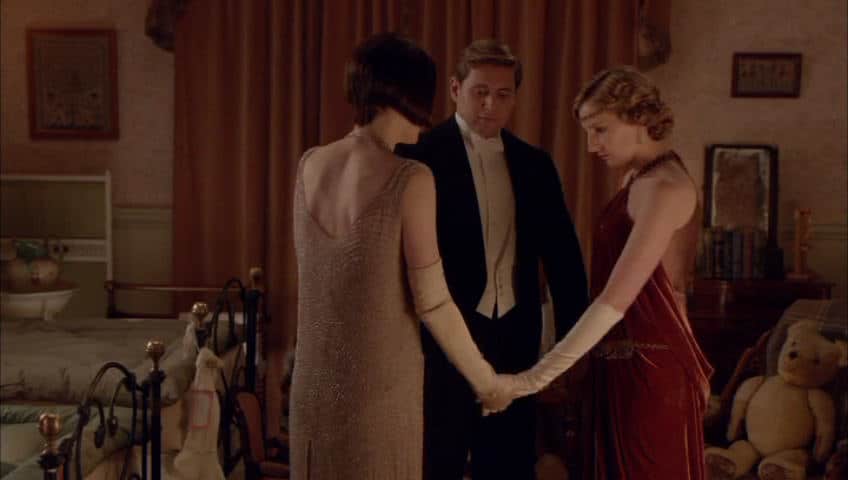 The Christmas portion of the episode is gorgeous! There is snow, Christmas decorations and the three children decorating the tree. One of the satisfying scenes was when the three siblings – which includes Tom, think alike and lay out their children’s stockings before going down to the party. Tom suggests they take a moment to remember Sybil and they join hands. (This is hopefully a precursor of what’s to come: better relationships between the Crawley siblings). Tom continues to make his plans to leave Downton and doesn’t wish to leave Sybbie at Downton until he’s settled in spite of Robert’s request. He tells him that he loves the way Robert loves Sybbie though. Downstairs, the servants and farmers ensemble for the Christmas gathering and Robert gets a bit tipsy as carols are sung and speeches given. The children join the festivities and learning to be a more interactive grandfather, he announces Marigold should call him “Donk” as Sybbie does. Tom is able to pay tribute to the family he has come to love deeply and Robert also is able express his respect and love to his son-in-law.

A Romantic Moment – or Two

Even among the darling, endearing moments that encapsulate this installment, perhaps the best – or maybe just the perfect way to cap off the season finale was this standout romantic declaration between Carson and Mrs. Hughes. The seasons have been teasing this, building up to it and finally it was the right time. Earlier in the episode, Mrs. Hughes pulls out of the deal she and Carson discussed regarding their boarding house because all of her funds go to the care of her mentally handicapped sister. Carson understands but seems sad to think he won’t enjoy the joint venture with Mrs. Hughes. He wants to find a way they can have a future together and it would seem he knows how to fix this. He proposes marriage to Mrs. Hughes. Worried he’s offended her when she doesn’t respond, he tells her in his proper way he won’t be marrying anyone else and that he does want “to be stuck” with Mrs. Hughes. Most sweet is her reply: 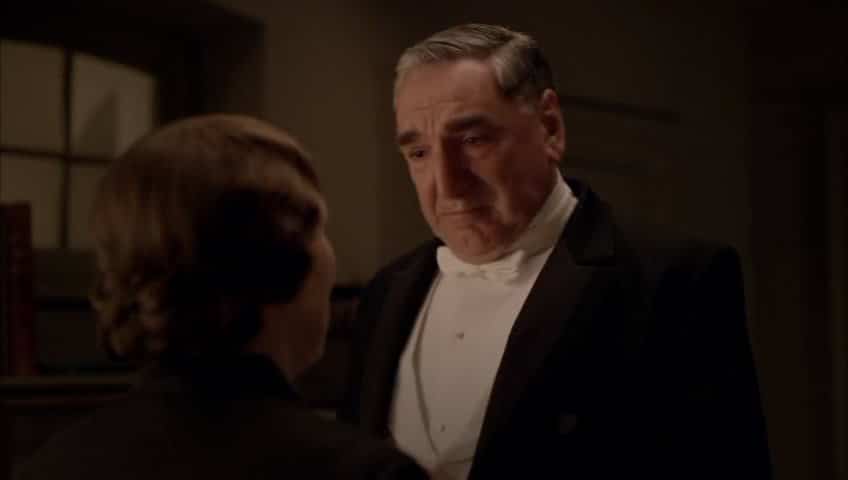 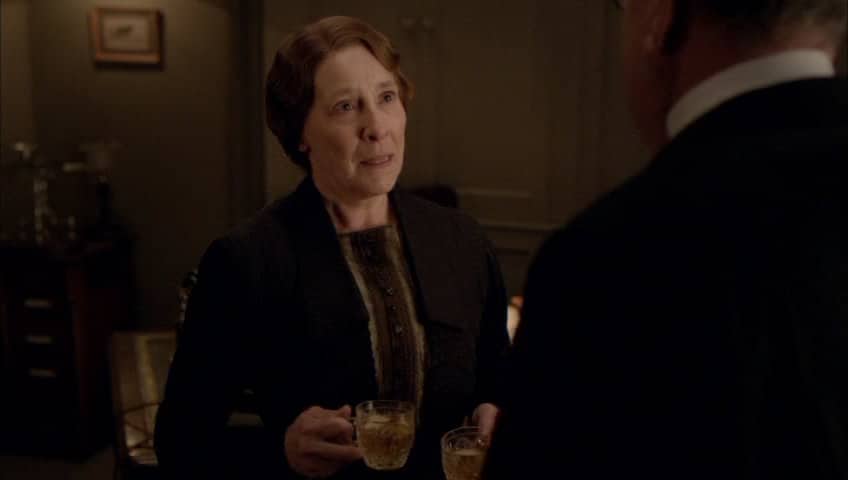 “Of course I’ll marry you, you old booby. I thought you’d never ask.” 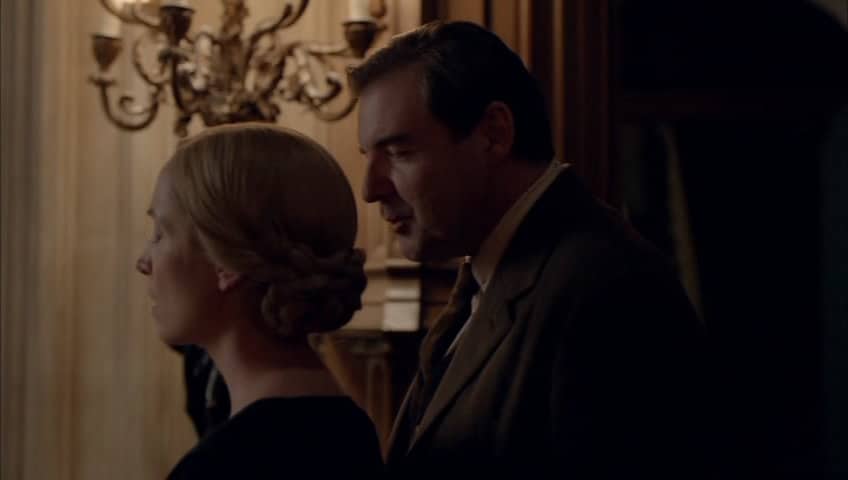 Secondly, Bates returns to Downton during the Christmas festivities and surprises a delighted Anna. Her joy is short-lived however when logic kicks in and she grows anxious about what the law will do now he’s back. Bates eases her fears telling her they should worry over nothing but enjoying a happy Christmas. The two kiss and sneak off to the sounds of Christmas carols echoing in the Abbey.

Though Downton Abbey is known for its witty quotes thanks to Violet, I have to confess, Mary’s line was a favorite tonight. To understand what it means, it’s best to watch the episode, but the way she says it suits the scene very well. 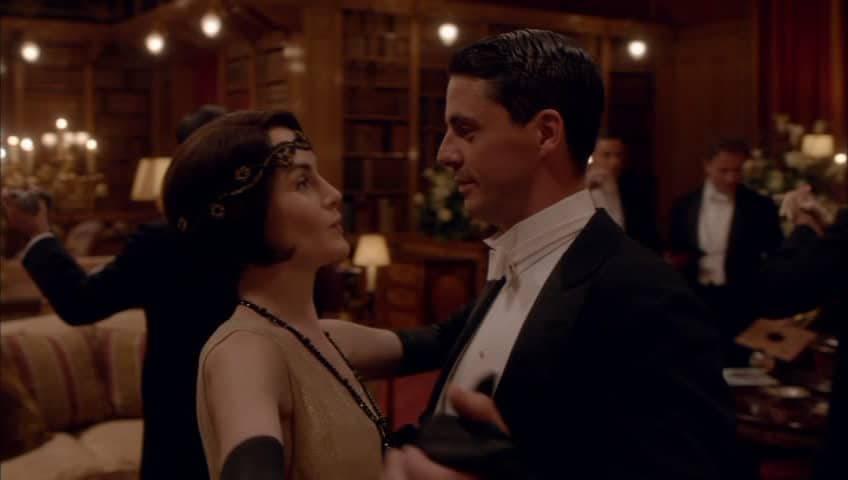 “The butler is back in his box.”

+ In a tearjerker, Isobel tells Lord Merton she cannot marry him. She is firm in the opinion that she doesn’t want to spend her remaining years at odds nor does she want to come between Dickie and his sons. Though Lord Merton does try to get his sons to accept Isobel, they don’t. This makes me so sad. Did anyone else like this pairing? I don’t mind saying I was rooting for it.

+ Further cementing the comical bickering that has gone on the entire season between Countess of Gratham’s staff, Spratt challenges Denker to make a broth for her mistress. A challenge that is quite funny and solidifies the competition going on between these two.

+ Violet finally tracked down Princess Karogin with the assistance of Shrimpie and she brings her to her home where she and the prince are reunited. A very cold reunion it is, but it makes Violet’s decision very easy; she’s not about to run off with a married man. Thank goodness! I don’t mind saying, I didn’t much care for this story.

What did you think of the season five finale? Did I miss any of the highs – or lows, of the episode? For me, it was a tearful experience. The feels were off the charts between the goodbyes and the romantic encounters! Sound off below with any favorite moments or any thoughts you have about season six. I’ve love to chat with you.

Our romance-themed entertainment site is on a mission to help you find the best period dramas, romance movies, TV shows, and books. Other topics include Jane Austen, Classic Hollywood, TV Couples, Fairy Tales, Romantic Living, Romanticism, and more. We’re damsels not in distress fighting for the all-new optimistic Romantic Revolution. Join us and subscribe. For more information, see our About, Old-Fashioned Romance 101, Modern Romanticism 101, and Romantic Living 101.
Pin this article to read later! And make sure to follow us on Pinterest.
By Rissi JC on March 2nd, 2015