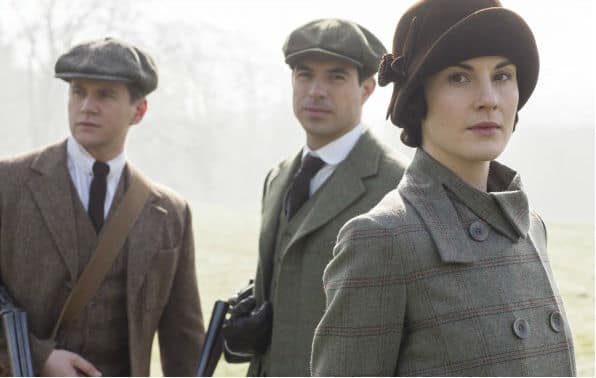 Last night television screens were again lit up for the U.S. premiere of the fifth season of the wildly popular, Downton Abbey. This season provides us with many changes as we enter the era of wild morals, short haircuts and the “flapper” styles that dominated the 1920’s. There is a “shaking” upsetting the very grounds and foundation of Downton or so the starchy yet lovable Carson tells Mrs. Hughes. Much happens in this premiere, so forgive me if not everything is covered. The first episode certainly sets up more than one problem for the season, some of which may go about breaking our hearts.

Edith’s life has been one big disappointment after another, starting way back when she crushed on Matthew only for him to have eyes for no one but her independent sister Mary. Then there was the jilting at the altar, but that’s not where season five places her. Today, as the season opens, we watch her on a bicycle peddling towards the farm of the Drewe family whom she struck a bargain with when she decided to bring her illegitimate child over to England. While Mr. Drewe is the only person in the family who know Edith’s interest in Marigold, his wife is on the defense over Edith’s many visits to the farm to visit with young Marigold and it is causing tension in their marriage. 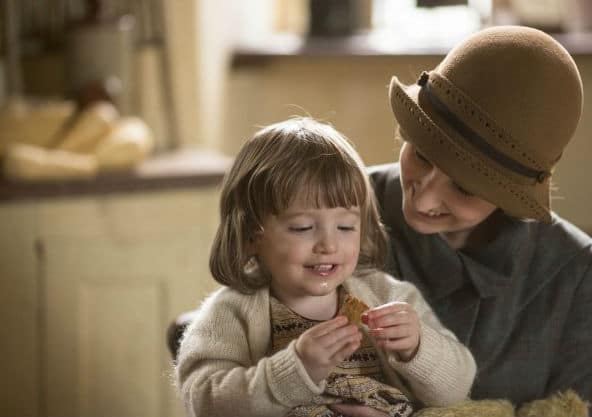 Edith clings to Marigold tighter than is normal for a woman supposed to be an impartial visitor and if she’s not careful this is going to get her into a fine kettle of trouble. Unfortunately for her, her love for the daughter she can hug, see and love isn’t one she can claim.

New Government and a War Memorial

1924 has ushered in a new government. One that Lord Grantham disagrees with (mainly because the government wishes to dismiss everything people like the Crawley’s stand for) as well as some conflicts that begin festering elsewhere (only those of us who have grown to love a certain son-in-law may be left disappointed by this chatter). To occupy his time, Robert’s kept busy with talk of a new war memorial being built in their village. This means a memorial committee assembles and pays a visit to Downton with the expectations of asking Robert to head the committee only much to everyone’s shock, it’s not Robert the delegation wishes to engage, rather Carson.

Following some grumbling and concern over the proper way to go about things, Carson eventually does accept only not without some of his own conditions. He plans to see to it, without the knowledge of Robert that the only way he will serve is if Robert too is a member of the delegation. This temporarily puts the opinionated schoolteacher, Sarah Bunting in her place. Her wild opinions are made known following the generous invitation to an anniversary party (Robert’s and Cora’s) at Crawley’s dinner table. Here she manages to insult Robert earning herself a permanent place on his bad side, which leads us into Sarah’s side of the story… 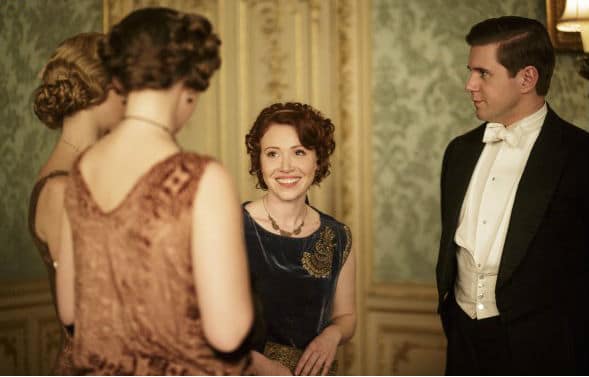 After receiving Rose’s (who is still very much a part of the daily life at Downton) dinner invitation to the abbey, Sarah reluctantly accepts. Her views and ideals are similar to the way Tom Branson once protested the lives of the wealthy. Since he’s been bettering the estate and living with his family by marriage, Tom has changed and it’s been a good thing… (his character is someone we’ll talk more about in later recaps). For now, his reaction and interaction with Sarah is stilted. He’s acting on shaky ground as he understands Robert’s reservations about Sarah and only he is able to set the record straight with Robert after the awkward anniversary dinner (one that includes family and the unexpected albeit planned – on her part – arrival of Lady Anstruther). He finally tells Robert that their “indiscretion” (from season four) when caught in a nearly empty Downton Abbey wasn’t anything other than it appeared to be, which was Tom showing the house to Sarah.

Elsewhere, Mary thinks she’s made her mind up between the attentions of her two suitors and her heart seems to be leaning towards Lord Gillingham. Visiting Downton for the anniversary bash already, Mary, Tom and Tony go out hunting for the day and of course, her mind seems all the more made up. Her emotions shift even more when Tony appears in her room where he proposes that the two become lovers. Mary takes it all in stride and though confused as to his initial suggestion they spend a romantic week together, she warms to the idea when asking why he wants to take this step in their relationship. He replies that he wants to know everything there is to know about Mary. Similarly, later when Mary reflects on his proposal she agrees it’s a good next step. She now knows she wants to re-marry only she intends to love her second husband as much as she did Matthew.

Probably the most comical set-up of the fifth season premiere is Violet potentially playing matchmaker for Isobel – a pair of friends that is ironic to say the least and those of you who watched this from the beginning will totally understand the logic behind this statement. Isobel caught the eye of Lord Merton (the end of season four) and Violet seems to make it her mission to give them both a nudge in the right direction; she hosts a luncheon for Isobel and Lord Merton. Only trouble is, she fleetingly begins to think it’d be horrifying for the two to marry. With Violet, it’s a “take your pick” for the reasons why: he is merely using flattery instead of genuine affection to tempt Isobel to his suit or Violet cannot stand the idea of Isobel being a lady and on rank with her in the social sphere. Any of these would probably apply to the old-fashioned woman, though it is comical to watch Violet play cupid and then see the terror cross her face at the idea that the spunky, working-class Isobel would become titled in this marriage! 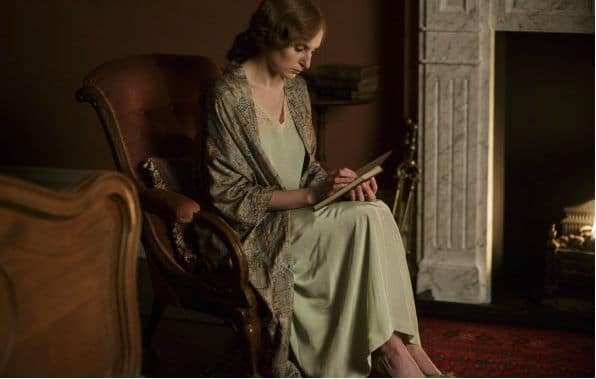 Bringing us to a close in episode one finds Edith in her bedroom with a photograph and book that was given to her (earlier in the episode) by Mrs. Hughes. This book was found during cleaning and inside was Michael Gregson’s name scrawled into the title page. Following their unconventional dinner party and another return home from one of her many visits with Marigold, she was unhappy, and feeling lonely and lost. In a fit of despair, she chocked her book to the side after reading it in bed. This fit of anger lands too close to the fire and catches later that night. Roaming the halls is Thomas who had been helping first footman Jimmy sneak into Lady Anstruther’s bedroom (his former employer and obviously more). Thomas spies spoke coming from under Lady Edith’s bedroom and sounds the alarm just before pulling the unconscious Edith to safety. 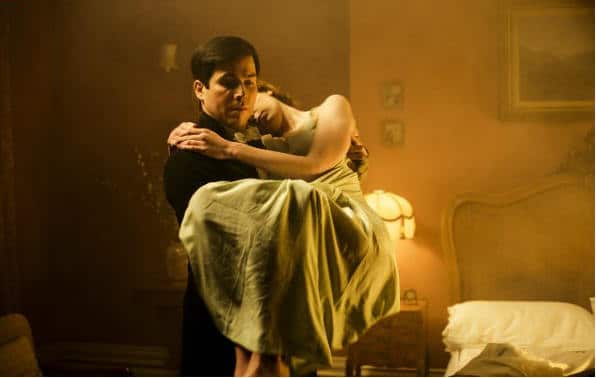 By now, the halls are full of family members as Tom rushes young George (Mary’s son) and his own daughter Sybbie in his arms to safety. 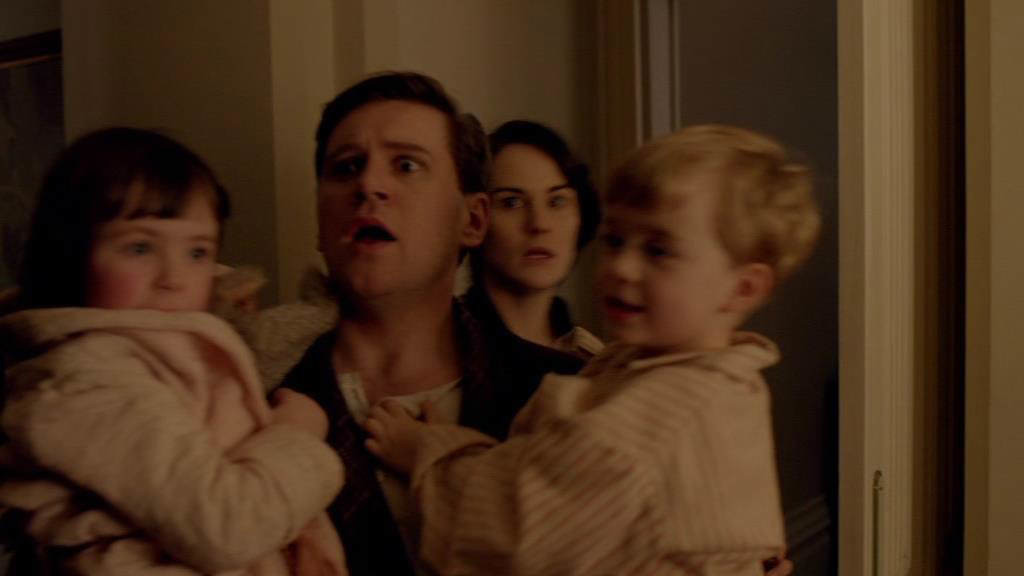 Lord Grantham is awakened and along with Tom, the pair of them attempt to put the fire out with sand and a water hose until their fire brigade arrives. Fearing not everyone hears the commotion, he checks each of the bedrooms only to come upon Jimmy and Lady Anstruther together… in bed.

Can we say, awkward? Needless to say this results in staffing changes.

What did you all think of the premiere? Did you agree with the decisions the characters are making? Which “team” are you: are you rooting for Charles or Tony (who should Mary choose!)? Are you surprised by Edith’s almost “obsessive” need to see Marigold? Share about your thoughts on Downton Abbey’s fifth year and check back next week, we’ll have the recap for episode two!

Our romance-themed entertainment site is on a mission to help you find the best period dramas, romance movies, TV shows, and books. Other topics include Jane Austen, Classic Hollywood, TV Couples, Fairy Tales, Romantic Living, Romanticism, and more. We’re damsels not in distress fighting for the all-new optimistic Romantic Revolution. Join us and subscribe. For more information, see our About, Old-Fashioned Romance 101, Modern Romanticism 101, and Romantic Living 101.
Pin this article to read later! And make sure to follow us on Pinterest.
By Rissi JC on January 5th, 2015