Trying to re-watch Doctor Who in the midst of a family wedding and family visitors can be rather difficult (hence why no post went up last Sunday) and since I am doing a bit of catch up on everything, today’s re-watch will only look back at episode 2’s “The End of the World.” Hopefully, by next week, everything will be back on schedule…But until then, here are some thoughts on episode two:

The Doctor and Rose 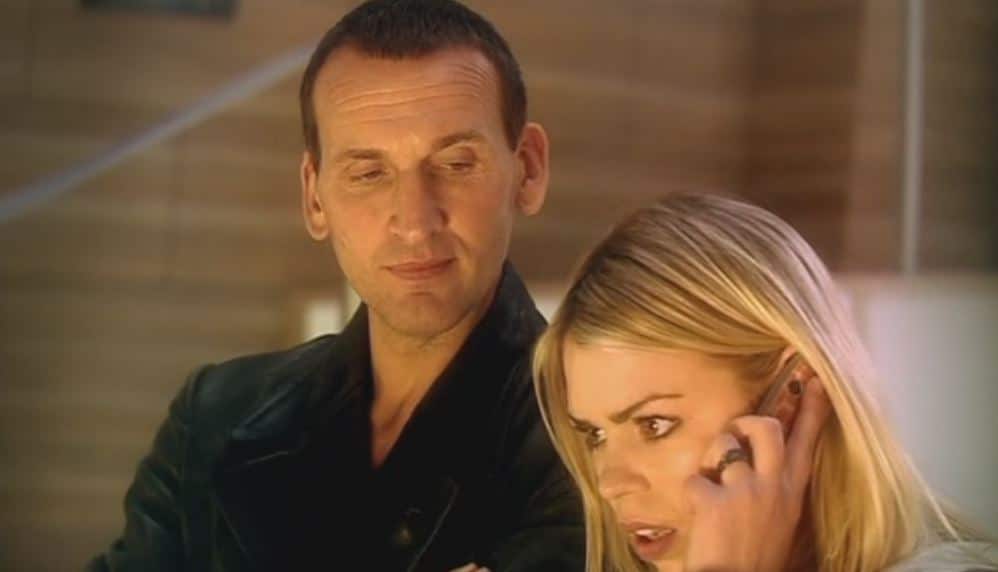 Going back to Eccleston, before the romantic 10th Doctor, it can be easy to forget just how flirty the 9th Doctor actually was. When the Doctor asked Rose, where she wanted to go first, it became a sort of game. He wanted to amaze her for their ‘date.’ One-hundred years, 10,000 years, none of that was impressive enough, so instead he took her to the end of the earth. But what started out as a flirtatious, bragging game, quickly turned into a serious adventure where the Doctor (probably only subconsciously) could help her understand what it was like to lose your home planet.

What I loved best about this episode was that it also swiftly transformed into a character study for both the Doctor and Rose. While the Doctor remained mysterious to Rose, who soon panicked when she realized she went flying off into the universe with a man she barely knew, “The End of the World” prepared both Rose and us (the audience) for the knowledge that the Doctor is in fact the Last of the Timelords.

I enjoyed that Rose didn’t just go along for the ride without any questions either. When she learned that the TARDIS got inside her head without permission, she called the Doctor on it for instance and they even quarrel. But she didn’t become over the top and abrasive at the same time. They could fight and become closer in the process rather than drifting further apart. I liked that about both of them and Eccleston and Piper really worked well off one another.

It was also great to witness Rose’s jealousy begin (a trait she maintains throughout the show at times), if only subtly. With Jabe, the tree woman, Rose takes it in good stride when the Doctor goes off with her but she still can’t hide her disappointment. When did both of their attraction begin? I’m thinking earlier on than some of us remember. Perhaps it just took a while to admit it to themselves. 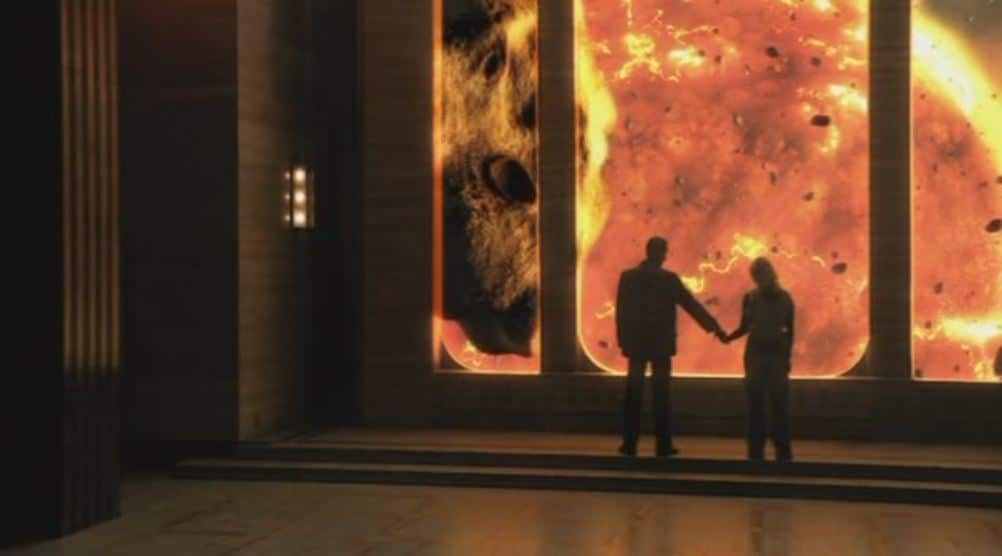 Moreover, what I love about the Doctor and Rose in this episode is that there is continual build up between the two, whether you see it as romantic or not. The writer doesn’t skip ahead where Rose knows everything about him and vice versa (too much offscreen development is a pet peeve of mine). No, instead, we actually see the two come to know one another through deep and intense conversations. After the earth was gone, Rose can’t help but be saddened by the fact that no one witnessed it go. With compassion, the Doctor takes Rose’s hand and brings her back to the earth to show her the positive nature of her planet, which does survive against all odds for billions of years. This well written conversation then turns to the Doctor confessing that his own planet is gone, that he was truly the last of the Timelords:

DOCTOR: I’m a Time Lord. I’m the last of the Time Lords. They’re all gone. I’m the only survivor. I’m left travelling on my own ‘cos there’s no one else.

DOCTOR: You’ve seen how dangerous it is. Do you want to go home?

Does she want to go home? Here, Rose is tested because sometimes traveling with the Doctor isn’t fun. Sometimes, it really can be dangerous. The subtlety when the Doctor smiles after Rose compassionately tells him, “There’s me,” is another nice moment because it not only reveals how connected these two already are (Rose being empathetic), but it also pin points the Doctor’s loneliness, in being the last of his kind. Rose thinks about it further but the conversation’s tone alters completely when she smells chips and thus actually begins their unofficial first “date.” 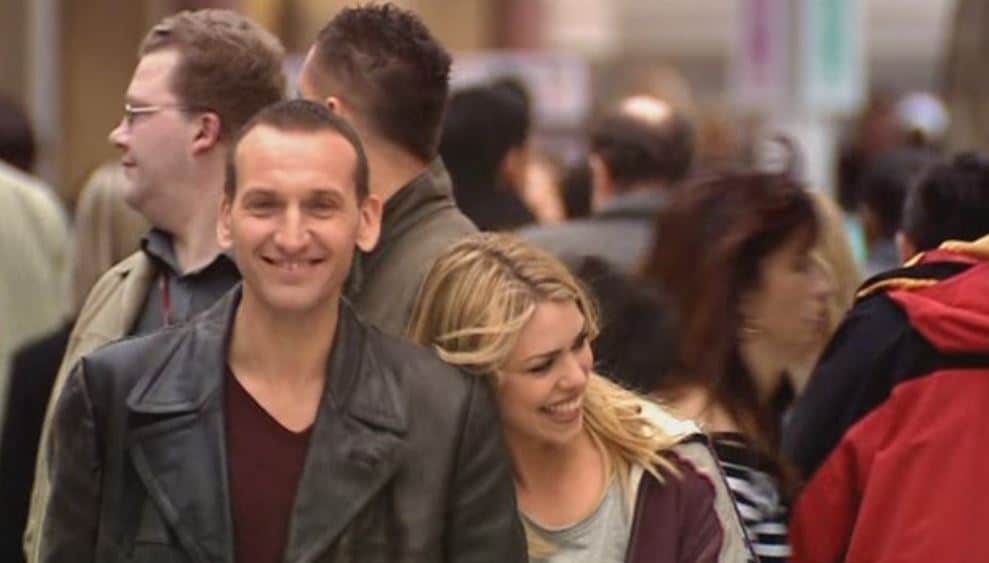 To end on a light-hearted note was a great choice by Russel T. Davies. He knows how to mix the sad with the humor and even a touch of the romantic. By the end of the second episode, I believe these two are coming closer together and maybe even beginning an attraction. 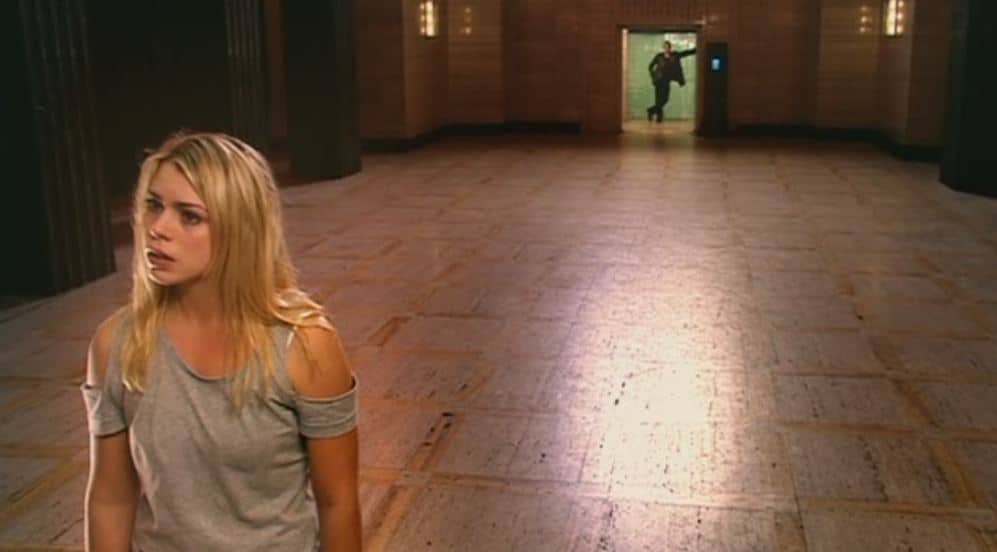 Outside of what I previously discussed, Rose has some great character moments when she is alone. Overwhelmed by all the “alien” nature of this trip, she takes off and wanders around the platform. Here, Rose has the opportunity to also reveal snippets of who she is as a person when she talks to the alien working on the platform. Right away, she wants to know who she is and get to know her on a deep level. Rose, if anything else (and sometimes she is wonderfully selfish), is a compassionate and empathetic human being. More than anything, I love that Rose comes across as a real person. This empathy continues when she fights for Cassandra’s life even after the woman tried to take hers. She makes for a good balance with this dark Doctor. When she confronts Cassandra earlier on, it reiterates how brave she is as a character as well. This is not a passive character, even though she doesn’t do the actual physical “saving” in this particular episode. 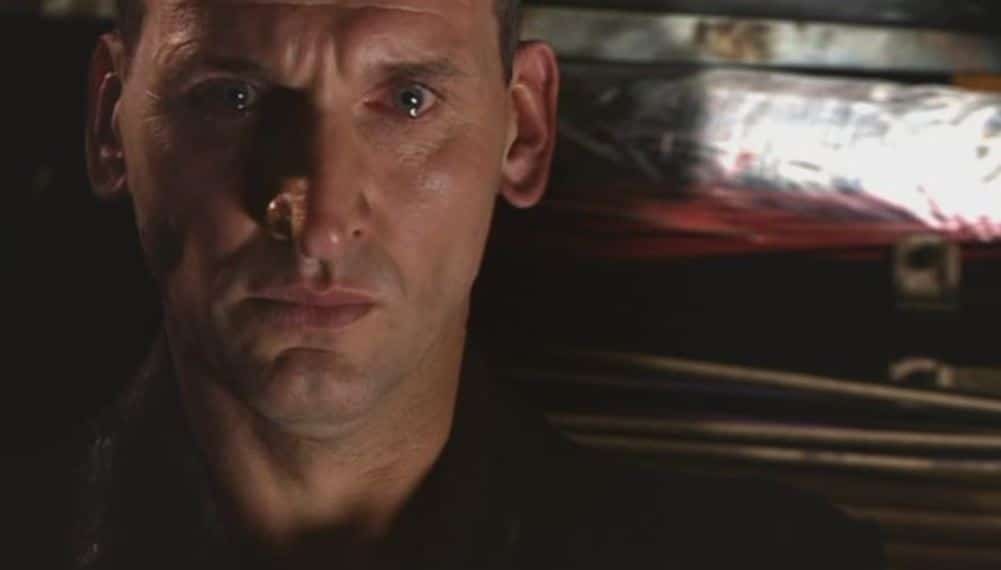 Gosh, I just love everything about the Doctor in this episode: he’s funny (‘breath’ from his lungs), flirty (and not just with Rose but with Jabe as well), and vulnerable. 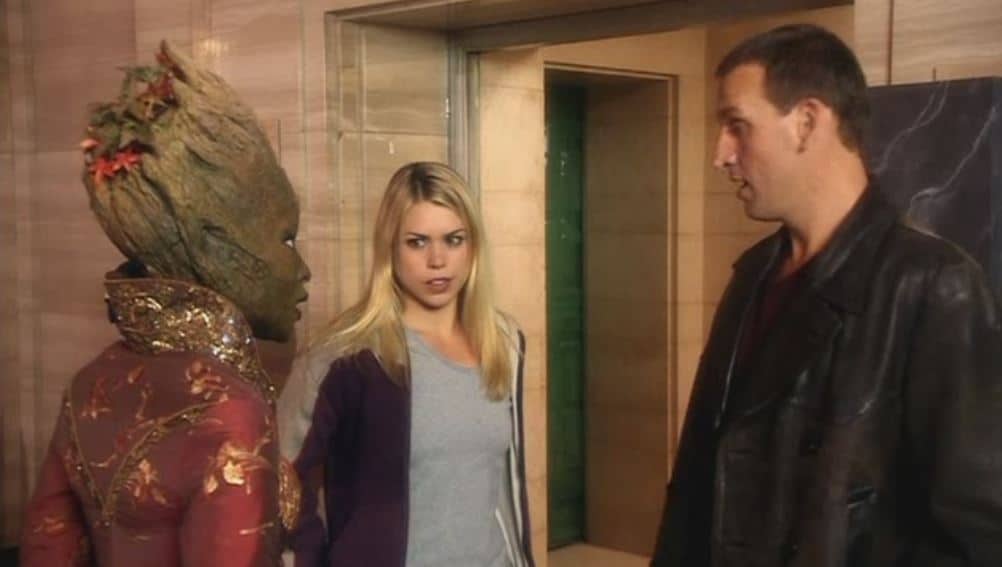 When Jabe mysteriously tells the Doctor she knows who he is but that it was “impossible” and how “sorry” she was for him, Eccleston’s acting as the Doctor was pure class. The emotions in the eyes and the REAL feeling of loss are portrayed with perfection. I also loved the Doctor’s turn to darkness when he doesn’t attempt to save Cassandra from death, allowing her to blow up. The Doctor also gets his turn to shine as the one saving the day. I like when characters take turns. 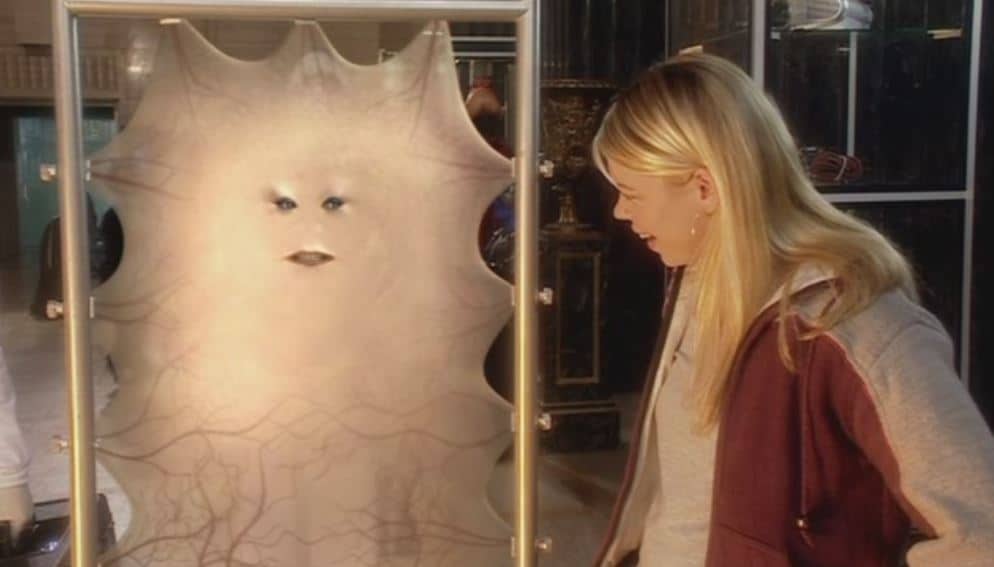 What a fabulously campy villain! I adore everything about Cassandra, including her character moments when she returns in season two.  What was great with her characterization in this episode alone is her desire for beauty. With Cassandra, Davies could examine clever themes of what it means to be human and society’s shallow obsession with being perfect and thin. Where will this desire lead us? This is really great writing, even if over the top at times.

DOCTOR Thank you. Yes, gifts. Er, I give you in return air from my lungs.

(He breathes on Jabe.)

DOCTOR: There’s more where that came from.

JABE: I bet there is.

CASSANDRA: But behold, I bring gifts. From Earth itself, the last remaining ostrich egg. Legend says it had a wingspan of fifty feet and blew fire from its nostrils. Or was that my third husband? Oh, no. Oh, don’t laugh. I’ll get laughter lines. And here, another rarity.

DOCTOR: With a little bit of jiggery pokery.

ROSE: Is that a technical term, jiggery pokery?

DOCTOR: Yeah, I came first in jiggery pokery. What about you?

ROSE: No, I failed hullabaloo.

JABE: And what about your ancestry, Doctor? Perhaps you could tell a story or two. Perhaps a man only enjoys trouble when there’s nothing else left. I scanned you earlier. The metal machine had trouble identifying your species. It refused to admit your existence. And even when it named you, I wouldn’t believe it. But it was right. I know where you’re from. Forgive me for intruding, but it’s remarkable that you even exist. I just wanted to say how sorry I am. 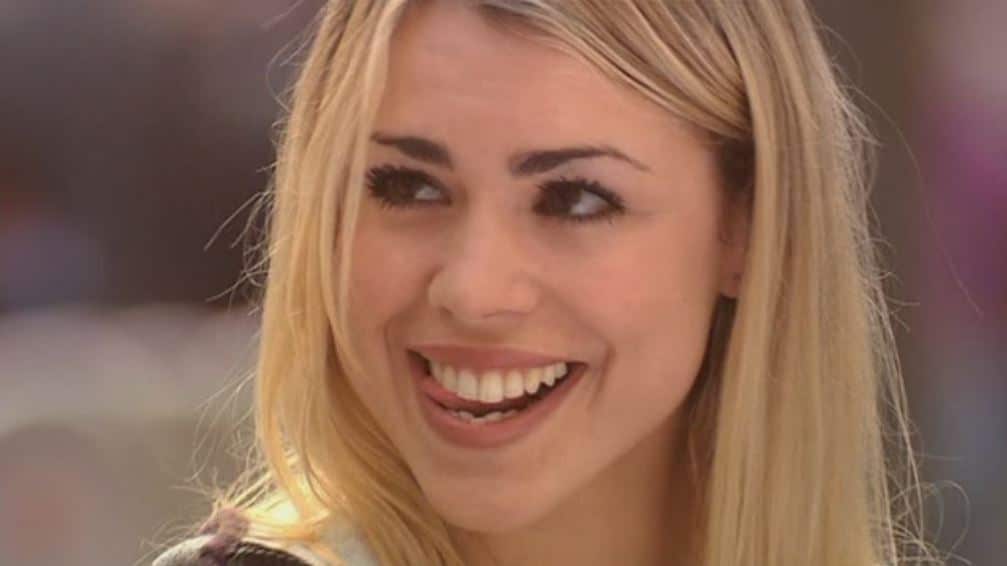 ROSE: Right then, before you get me back in that box, chips it is, and you can pay.

ROSE: What sort of date are you? Come on then, tightwad, chips are on me. We’ve only got five billion years till the shops close.

Was The Face of Boe in cahoots with Bad Wolf? Think about it; the whole event was sponsored by the Face of Boe, and if you pay close attention, you’ll notice another character was discussing “Bad Wolf” with him in the background. Certainly fascinating if you believe this is Captain Jack (and he hasn’t seen the Doctor and Rose for a LONG time). Also, how awesome would it be if he already knew what was about to happen because the Doctor and Rose told him as much? Here, the Face of Boe is making sure a paradox doesn’t happen by making sure this event does happen so as to bring the Doctor and Rose together. Plus, it’s kind of a romantic notion…Jack watching his old friends millions of years later. And it’s always good to remember that it WAS Bad Wolf who made Jack immortal which would then lead him to becoming the Face of Boe. So in all, isn’t it likely that the Bad Wolf purposely made him immortal so as not to create a paradox? She could see all of time and space after all. Just some food for thought.

What did everyone else think of “The End of the World?” Sound off in the comments…

Check out my other posts in the Doctor Who Diaries, including a theory on why Bad Wolf WAS the Moment and a romantic music video about the Doctor and Rose, and the first post of the ‘Doctor Who-Rewatch.’

Our romance-themed entertainment site is on a mission to help you find the best period dramas, romance movies, TV shows, and books. Other topics include Jane Austen, Classic Hollywood, TV Couples, Fairy Tales, Romantic Living, Romanticism, and more. We’re damsels not in distress fighting for the all-new optimistic Romantic Revolution. Join us and subscribe. For more information, see our About, Old-Fashioned Romance 101, Modern Romanticism 101, and Romantic Living 101.
Pin this article to read later! And make sure to follow us on Pinterest.
By Autumn Topping on February 9th, 2014