The calendar may tell us we’re now enjoying Christmas 2017, but Disney is ready to excite and tease us with thoughts of Christmas 2018.

How is the giant entertainment company doing this? By releasing images and teasing us with more information about their big-budget adaptation of The Nutcracker and the Four Realms. Set to release November 2 2018, it promises to be the perfect film for families to hit the theater over next year’s holiday season. If the teaser is anything to judge by, this version looks as if it breathes new life into the timeless story. A feat hard to do when classics are reimagined, but if done right, the results are magical.

Earlier this week, exclusive “first look” photos were released, and in the wake of this, Disney dropped the first trailer. Here’s a look at it in all its glorious HD quality:

Below, I talk a little bit about the story (judging by the trailer), the cast and conclude with some of my impressions of the film

It’s clear from the moment the trailer begins, and the chiming of a familiar tune plays, Disney has put a lot into this production. As the trailer continues, this feeling only strengthens as this teaser promo draws us further into an icy realm…

As I’m not extremely familiar with The Nutcracker‘s origins, I’m not sure what this one will mirror (though perhaps the film will closely follow the original story written in 1816, The Nutcracker and the Mouse King). The trailer does promise one thing with bold words in a gold text:

The legend you know

Has a dark side

This suggests the story will spiral into a kind of “good vs. evil” notion as most epic fantasy stories do. I appreciate that the trailer shows us a happier world (in the intro) before easing into the “darker” end of its story, all of which helps set up the tale filmmakers likely hope to accomplish. You can read more about the story and further details about The Nutcracker and the Four Realms on Oh My Disney!

THE CAST of The Nutcracker and the Four Realms

A story that requires an ensemble cast, this one is a blend of big-name and new talent. In my opinion, this is always something in the pro column; especially when The Nutcracker has been adapted through hundreds of mediums and in various ways. 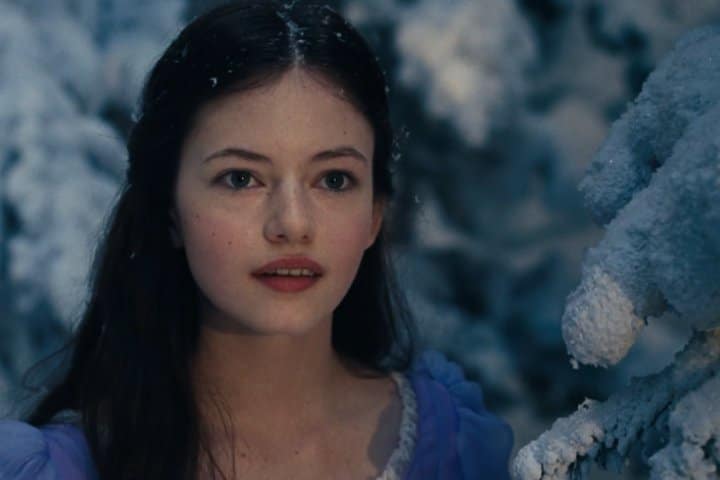 Familiar faces you’ll spy include Matthew Macfadyen(Pride and Prejudice), Morgan Freeman and Keira Knightley (Pirates of the Caribbean, Pride and Prejudice). It’s unclear whether or not Matthew and Keira will have any scenes together, but the idea of their reunion (they co-starred as Mr. Darcy and Lizzy in 2005’s Pride and Prejudice) is a fun one! As for the rest of the cast, Mackenzie Foy as Clara seems lovely in this trailer. From what I see, she has the kind of ease that suggests she’ll handle this role well. The official cast list also credits Miranda Hart (Call the Midwife), Richard E. Grant, and Helen Mirren, none of whom we see. Though I suspect it’s Helen’s voiceover in the final seconds of the trailer saying, “Time has come.” Also of note is American Ballet Theatre’s Principal Dancer Misty Copeland.

By all accounts, first impressions of this fantasy period drama are high. I’m excited to see what releases in the coming months for this film as Disney readies to release it next Christmas season.

It promises to be a treat for those of us who enjoyed Beauty and the Beast.  I even pick up similarities from Disney’s Alice in Wonderland. The world building looks fantabulous as do the sets and costumes. Even when there isn’t dancing, the entire production looks to have an elegance that’s not unlike a kind of “dance.” That alone speaks to a quality production. This is one winter wonderland I know I’m keen to discover.

What did you think of the trailer? Does this look like something you’ll see in theaters? What is it about the trailer or cast that leaves you most excited? Sound off below with your thoughts!

Our romance-themed entertainment site is on a mission to help you find the best period dramas, romance movies, TV shows, and books. Other topics include Jane Austen, Classic Hollywood, TV Couples, Fairy Tales, Romantic Living, Romanticism, and more. We’re damsels not in distress fighting for the all-new optimistic Romantic Revolution. Join us and subscribe. For more information, see our About, Old-Fashioned Romance 101, Modern Romanticism 101, and Romantic Living 101.
By Rissi JC on December 23rd, 2017