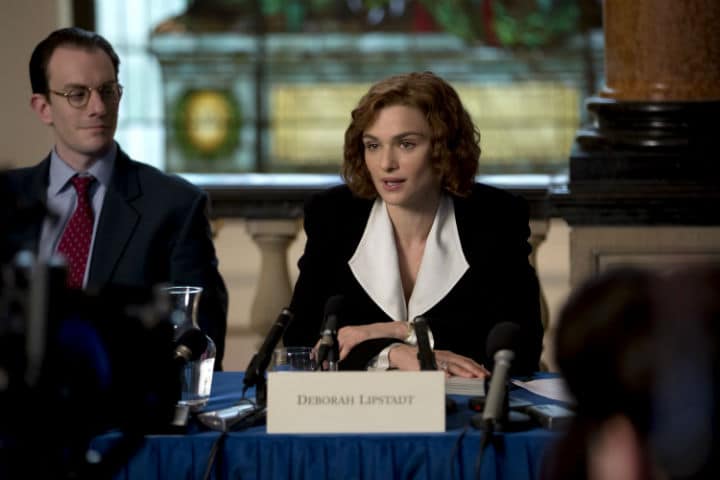 Based on real life events and a subsequent book, History on Trial: My Day in Court with a Holocaust Denier by Deborah Lipstadt, Denial is a drama detailing Lipstadt’s court battle with self-professed historian and Holocaust denier David Irving. 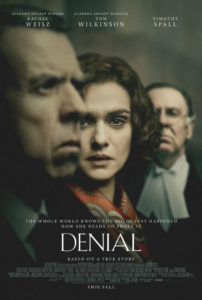 Lipstadt is a Jewish studies university professor and an author whose book has called out Irving and his beliefs in no uncertain terms. When he rudely interrupts and challenges her at a public speaking event, it sets the film’s events into action. Despite her mostly calm and measured response to his interruption, he brings a suit of libel against Lipstadt and her publishing company in the courts of the United Kingdom. Angered by his past cavalier and inflammatory statements regarding the Holocaust, Lipstadt refuses to settle. She determines to prove him wrong once and for all in a legal showdown for the prize of public opinion.

RELATED POSTS: A Tale of Love and Darkness (2015) -An Aptly Named Bleak and Hopeless True Story

Denial is a British-produced film populated with many familiar faces and talented actors. Not the least of which is Rachel Weisz playing the Jewish professor from Queens who takes on not only Timothy Spall’s David Irving but also the British court system. She is assisted in this endeavor by Tom Wilkinson (one of my favorites) as British barrister Richard Rampton who argues her case in court. And then there’s Andrew Scott as the head of her legal team and much sought after solicitor, Antony Julius.

As one would assume with this caliber of talent, each actor plays their role competently and credibly. Weisz is great as the no-nonsense, tough as nails, yet emotionally impacted Lipstadt. She is determined to win this case. Not just for herself, but on behalf of her people and the remaining survivors of the Nazi death camps. Her muted Queens accent, poise, and the brief glimpse into her past history display a woman determined to win yet who struggles with relinquishing control. Not to mention trusting her legal team to fight her battle for her. A few times I found her character a bit abrasive and irritating. But then she believes she fights for not just her reputation but the truth of a historical genocide. 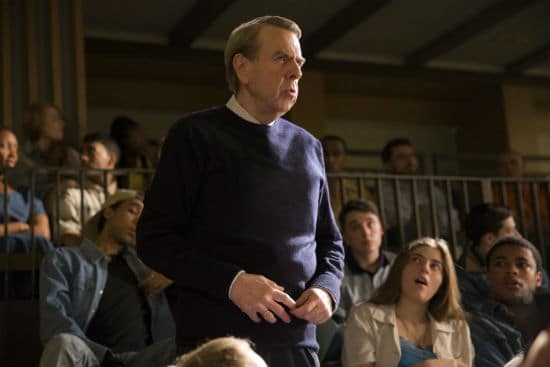 Spall plays David Irving as an obnoxious, crafty and oily villain who hides behind the title of historian and his upper-class lifestyle. He is a man easy to dismiss and despise because he is so unapologetic about his views. Wilkinson plays his opposite as the dedicated, yet reticent barrister who Weisz initially misunderstands. She thinks that this is just another case to him. He gives my favorite performance as his character’s thoughts and the impact of the case slowly unfold to reveal the depths of this man’s commitment to his case.

Although I do have an appreciation for certain court dramas, I found this one to be a little less engaging than I expected despite the subject matter. It moved slowly and at times lost my interest. It was missing a level of intensity which is necessary to keep a viewer engaged in a film with no action and which has a high level of dialogue.

However, it proved to be an interesting and educational look at how the British court system works. Even though Irving brings the case for libel against Lipstadt, unlike in American courts, the burden of proof falls on her. She is not innocent until proven guilty by the evidence Irving brings against her. No, she must prove her innocence by proving the truth of the Holocaust. As well as proving that Irving deliberately twists the facts. Another difference between the systems is that in the UK the attorney presenting the case in court (barrister) is different than the one performing the legal work and research on behalf of the case (solicitor). In America, the same attorney generally performs these functions. 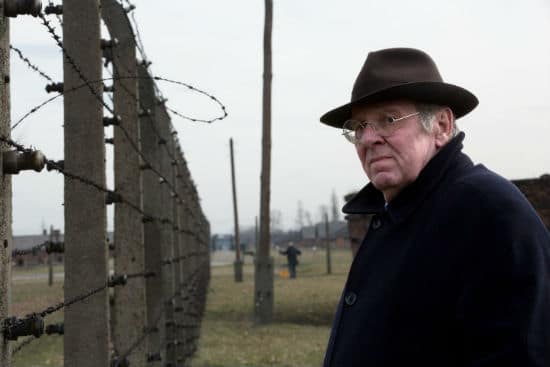 Because this film does deal with the Holocaust to a certain extent. there were a few emotional moments. Weisz and Wilkinson’s characters pay a quiet, wintry visit to Auschwitz in order to garner facts for their case.  These scenes were actually filmed at Auschwitz. And even on film, the somber atmosphere bleeds through, leaving the viewer feeling the massive weight of the tragedy of millions killed.

Another moment comes at the end when Lipstadt finally speaks to the press. Because her legal team’s strategy was to discredit Irving and not to defend the truth of the Holocaust, they refused to allow her to testify in court. But she had promised the survivors that their voice would be heard. At the press hearing, she speaks on behalf of those survivors, locking eyes with the one in particular who had made the request. It was a moment which brought tears to my eyes.

I wanted to love Denial but found myself at the end with mixed feelings. At times the pace of the story drags. And even with the superb acting, I never really connected with any of the characters. Nor did the film engage in any character development which might have enhanced the story. On the other hand, this is a true story which I might never have heard of otherwise. And in spite of the fact that it was highly publicized at the time, dragging on for years and costing millions of dollars.

It is horrifying to think that there are those who actively seek to deny and rewrite history, particularly the history of such a heinous event. Yet, this makes Denial relevant. Even though the Holocaust is over, other past genocides are still being ignored and denied while current genocides still occur in the world today. How will we respond? Will we find ourselves at some point in the future fighting the battle over truth and watching another film like Denial? This film proves that truth is not just fought over and won in legal courts, but also the court of public opinion.

Content Note: This film received a PG-13 rating for the use of some profanity, including some racist language. There is talk and brief glimpses of the violence which occurred at Auschwitz.

Where to Watch: Denial is currently streaming on Amazon Prime and is also available on DVD.

Our romance-themed entertainment site is on a mission to help you find the best period dramas, romance movies, TV shows, and books. Other topics include Jane Austen, Classic Hollywood, TV Couples, Fairy Tales, Romantic Living, Romanticism, and more. We’re damsels not in distress fighting for the all-new optimistic Romantic Revolution. Join us and subscribe. For more information, see our About, Old-Fashioned Romance 101, Modern Romanticism 101, and Romantic Living 101.
Pin this article to read later! And make sure to follow us on Pinterest.
By Brittaney B. on July 8th, 2017