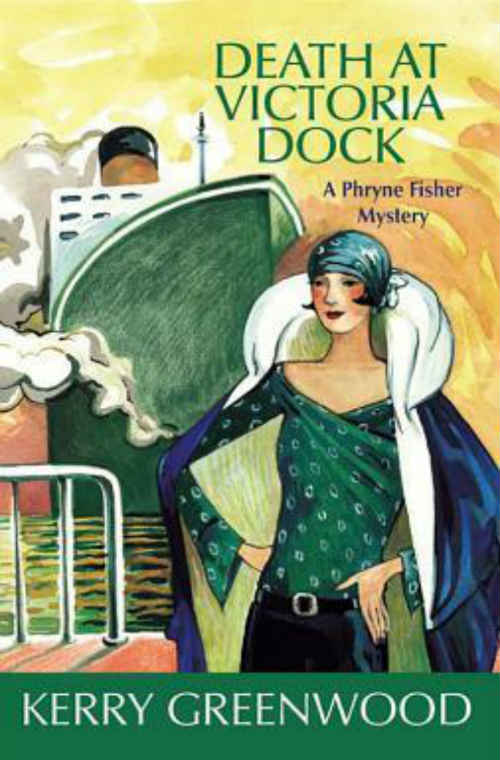 Driving home late one night, Phryne Fisher is surprised when someone shoots out her windscreen. When she alights she finds a pretty young man with an anarchist tattoo dying on the tarmac just outside the dock gates. He bleeds to death in her arms, and all over her silk shirt.

Enraged by the loss of the clothing, the damage to her car, and this senseless waste of human life, Phryne promises to find out who is responsible. But she doesn’t yet know how deeply into the mire she’ll have to go: bank robbery, tattoo parlours, pubs, spiritualist halls, and anarchists.

Along this path, Phryne meets Peter, a scarred but delectable wharfie who begins to unfold the mystery of who would need a machine gun in Melbourne. But when someone kidnaps her cherished companion, Dot, Phryne will stop at nothing to retrieve her.

Fans of Phryne Fisher of Miss Fisher’s Murder Mysteries will enjoy reading about her adventures on the page. While Death at Victoria Dock was a bit short, it was action packed from page one. There is no slow period in the novel, except for a brief romantic interlude or two.

Furthermore, Death at Victoria Dock has all the fun and classy humor of the television series. Phryne is the formidable lady detective we’ve all come to love and it amazed me how Essie Davis’ portrayal matched up to Phryne in the books. Greenwood’s writing style is lively and doesn’t bore you with too many details.

RELATED | Romantic Moment of the Week: Jack and Miss Fisher

Overall, the story is well done and we get introduced to Hugh Collins in this book. When Dot blushes over him it is adorable. Romance wise, Phryne’s romantic involvement is with the anarchist Peter. Like most of Phryne’s men, it’s a brief, blazing flame. I sorely missed Jack in this book. The banter between Jack and Phryne in the show kept me engaged. I was less engaged in the book. However, I had to remind myself to try to separate the two. I just felt there was something vital missing from it without Jack. There was at least the dynamic duo Bert and Cec to tide me over for banter.

I enjoyed seeing where one of my favorite television shows came from. Greenwood’s tells a great mystery story and that translated well into the television show. Death at Victoria Dock is not too in-depth if you are looking for a deep, life-changing novel or an epic romance. However, I would recommend it to those who want to know Phryne Fisher better.

Our romance-themed entertainment site is on a mission to help you find the best period dramas, romance movies, TV shows, and books. Other topics include Jane Austen, Classic Hollywood, TV Couples, Fairy Tales, Romantic Living, Romanticism, and more. We’re damsels not in distress fighting for the all-new optimistic Romantic Revolution. Join us and subscribe. For more information, see our About, Old-Fashioned Romance 101, Modern Romanticism 101, and Romantic Living 101.
Pin this article to read later! And make sure to follow us on Pinterest.
By Mandi Harris on September 6th, 2016