Death at the Grand Recap

“Death at the Grand” is one of the stronger episodes of season 3. It features a thrilling murder that’s difficult to piece together; higher stakes since Phryne’s father, the wily Baron Fisher is involved; and even more dazzling romance than usual since there be waltzing in this episode!!

A murder at the Grand Hotel brings Phryne & Jack together, and the mystery is heightened by the fact that a piece of evidence at the scene is one of Miss Fisher’s bags! Though they get sidetracked by some illegal gambling and Phryne shows off her (of course) excellent card skills, they find that the root of the crime comes back to Phryne’s secretive father and his missing money. An ancient (and therefore very scary) grudge is revealed against him and Phryne has to put aside her conflicts with her father to solve things. However, there’s buildup since the reason for murder and the grudge is not actually revealed at the end of the episode, promising an intense finale to come.

Jack had some very cute moments enjoying Phryne’s fight for control with her cunning father; he can’t quite hide a smile when realizing the elder Fisher had outsmarted the younger Fisher (truly, a feat). 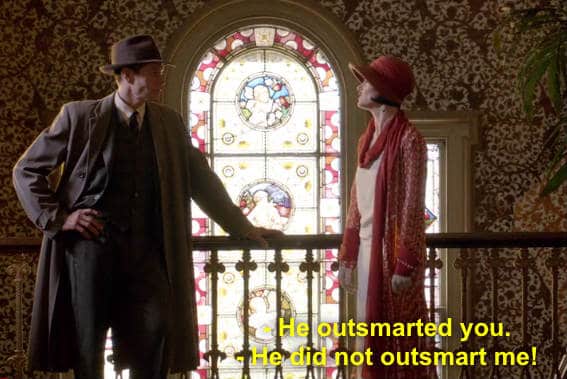 Another fun part of the episode is the new Constable falling for Dot. Hugh’s replacement, Neville, is annoying, ambitious, and enlists Dot’s clever help only to steal the evidence from her and pretend it was his. Thankfully, Jack knows the good evidence might have been found from the women on the team and not his dweeby assistant.

Further complicating things: the two are forced to kiss to cover up the reason they were snooping in a locked room, and suddenly Neville is into Dot. She’s forced to tell him repeatedly that she is engaged, and he, in response, cries and asks for a transfer. This was reassuring because Hugh was a much better character but the fact that the writers made this an event made me worry. Where is Hugh? Is this supposed to create doubt for their future or just spice things up before he comes back?! However, I love that the boys love Dot. She deserves all of it.

Ah, best for last – it’s repeated in the show that Miss Fisher’s parents fell in love during the waltz – as it’s a very dangerous and passionate dance. At the end of the episode, Jack puts on the waltzing music and says the magical words – “Care for a waltz?” Though it’s embarrassing to do so, I do admit the hope that one day these words are directed towards me, if only so that I can identify more with my favorite historical fiction heroines. Miss Fisher seems impressed – and reminds him of her history of dancing with English princes and the like. But Jack, as ever, is unruffled. He’s not afraid of Miss Fisher, try as she might to intimidate him. 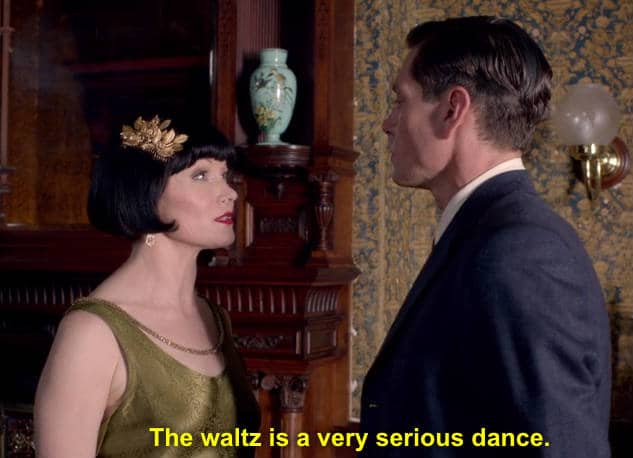 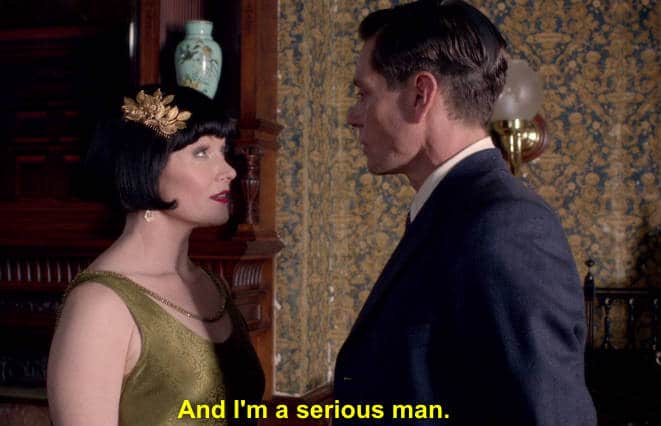 Finally, I really, really really love how the show ends with the old-timey fade out into black; this ending with them dancing is one of my favorite ending moments. It’s quiet, sweet, and you’re left with the image of the two of them waltzing on…sigh. 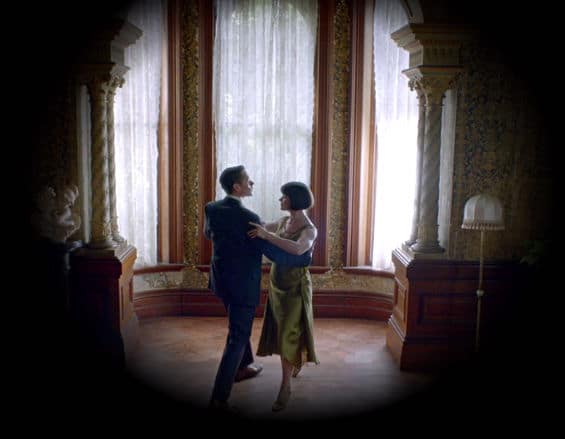 What did you think of Death at the Grand? Sound off below…

Our romance-themed entertainment site is on a mission to help you find the best period dramas, romance movies, TV shows, and books. Other topics include Jane Austen, Classic Hollywood, TV Couples, Fairy Tales, Romantic Living, Romanticism, and more. We’re damsels not in distress fighting for the all-new optimistic Romantic Revolution. Join us and subscribe. For more information, see our About, Old-Fashioned Romance 101, Modern Romanticism 101, and Romantic Living 101.
Pin this article to read later! And make sure to follow us on Pinterest.
By Amirah Yasin on August 29th, 2016