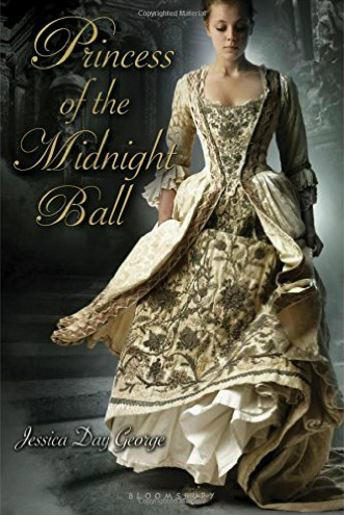 Knitting patterns and 12 Dancing Princesses! Who could ask for more from one lovely book?

There are some books that I return to in times of anxiety and depression that remind me that there are bravery and magic in the world. Some books that, simply put, make me happy. Jessica Day George’s Princess of the Midnight Ball is one of those books.

I don’t know what it is about the 12 Dancing Princesses tale; it just makes me happy and always has. I have fond memories of my dad reading an orange covered storybook of the fairytale when I was young. And really, what is there not to like? Depending on the version you read, the princesses are either incredibly mischievous or they are cursed and forced to dance night after night. Either way, they travel to a magical world, or alternate dimension, and dance the night away. Either option makes for a rich tale, dark and filled with mystery. There are few things that I enjoy more.

Jessica Day George does not disappoint with her rendition of 12 Dancing Princesses. She skillfully crafted a story that is both original and true to the classic tale.

The story follows Galen, a young soldier returning home from a long war. Like the best fairy tales, he meets a beautiful princess and becomes intrigued by her and the tragic mystery that surrounds her. I say intrigued because I believe that is exactly how it starts (and that is part of what makes me so happy). I LOVE, love stories that don’t start with the love at first sight cliché. That is not how love works, especially for a young foot-soldier and a crown princess. I think it’s a more realistic way to tell the story and it is more enjoyable for the reader to watch a pair steadily fall in love.

Galen is, without a doubt, the brightest spot in the book. A gallant young soldier set on saving the object of his affection knowing she cannot return his love. Princesses don’t marry commoners, after all. He never whined about it or expected her to reciprocate his feelings. His primary desire was to see that she was safe and perhaps dance with her at a ball. His chapters were enjoyable and I felt like I knew him from the very first moment he stepped onto the page.

Princess of the Midnight Ball also follows Princess Rose, the eldest of 12 sisters who are all cursed to fulfill their mother’s promise to a wicked sorcerer to secretly attend a magical ball every night at midnight. Rose is a strong, brave, and interesting young woman who finds herself completely unable to save herself or her sisters though I believe she would, if given the chance. Rose’s chapters are all more internal than Galen’s but the sort of young woman she is is clear early on. Rose is portrayed in the way we often think of older sisters, often annoyed with her younger sisters but fiercely protective of them.

Rose, much like Galen, is an easy character to cheer for. She is good for the sake of being good. She sacrifices much of herself to save her sisters as well as the young men who come to Westfallin in an attempt to solve the mystery of the shoes that were danced to pieces, even the ones she dislikes.

Even when Rose grows ill, unable to properly rest because of the curse, she strives to care for her sisters. She is just as brave and gallant as Galen, in her own way. One of the best things about The Princess of the Midnight Ball is the way Jessica Day George portrays woman as fierce and strong but never as the sarcastic, leather-clad, warriors we so often get in modern YA. I love seeing a princess who is a damsel but is managing her distress.

The other characters in the story tend to blend together a bit, which is understandable considering the sheer size of the cast. Jessica Day George makes light of this later in the book talking of how Pansy will complain all week of being called Poppy by a visiting prince. They are each given enough personality to let the reader know that it is a different, and younger princess than Rose speaking but not enough personality to have them leap from the page the way the primary characters do. However, it’s all right that they don’t. In many novels, the secondary characters fade into the background, although, at times it felt like there were only 12 princesses for the sake of being true to the original fairy tale.

A definite recommend for anyone who loves fairy tales, knitting, and dancing.

As a lover of the original tale and every rendition of it, I found Princess of the Midnight Ball a delightful read. It sparkled with little details from the original tale. Still, as a reader, I thought it left a few things to be desired. The world the characters lived in felt half-baked and hazy, difficult to see beyond the events taking place. This didn’t detract from the book; it simply left me hungry for more information, like only being allowed to eat a few bites of a steak dinner. The mysterious world ‘under stone’ where the Midnight Ball took place, however, was delightfully imagined. The descriptions of it sent chills up my spine.

I also wished I had the opportunity to see and hate the villain before the last 100 pages of the book. Let me be clear, the last 100 pages make the whole book worth it! If you start reading it and find yourself wondering if the book’s worth it, just know that the last 100 pages really do make the whole thing worthwhile. It’s at that time the reader sees the original fairy tale with all of its small details; the soldier climbing into the princess’ boat and laughing to himself when Rose’s suitor struggles to take them across the lake, or accidentally stepping on one of the younger princesses’ gown. It’s small things like that I treasure.

It’s also when we truly get to hate the villain! We finally meet him and he is as horrifyingly evil as I had grown to hope while reading the book. And, of course, we get another chance to see just how Gallant, valiant, and heroic Galen is.

Princess of the Midnight Ball is part of a series, a trilogy, but also stands on its own. A definite recommend for anyone who loves fairy tales, knitting, and dancing.

Have you read this book? What are your thoughts on this charming fairy-tale retelling? Let me know in the comments!

Our romance-themed entertainment site is on a mission to help you find the best period dramas, romance movies, TV shows, and books. Other topics include Jane Austen, Classic Hollywood, TV Couples, Fairy Tales, Romantic Living, Romanticism, and more. We’re damsels not in distress fighting for the all-new optimistic Romantic Revolution. Join us and subscribe. For more information, see our About, Old-Fashioned Romance 101, Modern Romanticism 101, and Romantic Living 101.
Pin this article to read later! And make sure to follow us on Pinterest.
By Katrina Daroff on March 30th, 2016