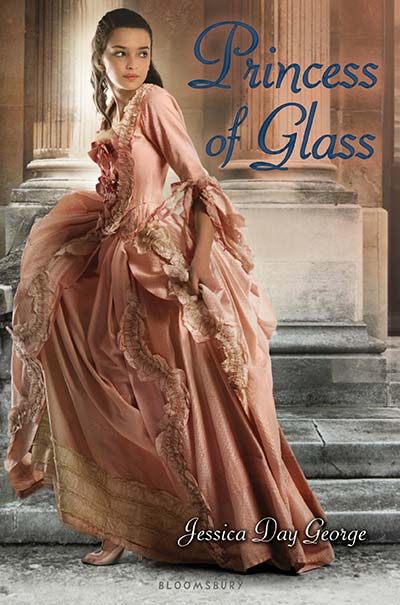 Honestly, when I picked up Princess of Glass I grimaced. Another version of Cinderella, possibly my least favorite fairy tale. It’s overdone, for understandable reasons; the Disney film is iconic, most cultures have a version of it, and who doesn’t love a story in which a girl changes her life through the power of dance? Well… me, I was never terribly excited by the Cinderella story. In fact, I am bored with Cinderella. It doesn’t matter if it’s A Cinderella Story, Ever After, or Disney’s Cinderella. If you start telling me a story involving dancing in glass slippers, my eyes glaze over and I stop listening.  I’ve heard it too many times and I’m bored with it. Princess of Glass changes all of that.

Princess of Glass takes the threadbare Cinderella story and spins it around to make something new that surprises and delights readers.

About three years after Galen and Rose fell in love and saved the 12 Dancing Princesses from their curse, it is Princess Poppy’s chance for a grand adventure, whether she wants one or not. Poppy was one of the middle set of the 12 cursed princesses who “never danced again.” As part of a Royal exchange to promote peace, Poppy travels to Breton (the Great Britain to Westfalen’s Germany, if you’re keeping track), her late mother’s home country.

Having sworn off dancing, after the curse, Poppy only attends balls so as not to be rude to her hosts and to play cards, which she is quite good at. She will not even accept a dance card to wear around her wrist in case she should be cornered by an over-eager young gentleman. That is until a mysterious young woman draped in strange magic threatens the safety of her new friends. Cinderella sweeps into a ball with the scent of a love spell dripping from her clothing and her magical glass slippers. She turns the entire kingdom on its head and it becomes Poppy’s responsibility to save the kingdom, and Cinderella, from the clutches of Cinderella’s villainous fairy godmother.

I love any book that gives me something new, something I was not expecting. The characterization of Cinderella, the two ugly stepsisters, and the fairy godmother thrilled me to no end simply because it was new and different. Every story has multiple sides, is it really possible that the ugly stepsisters weren’t really wicked at all? Perhaps that’s just how Cinderella remembered them. Was the fairy godmother really a selfless and noble as we want to believe or did she have ulterior motives for helping Cinderella? That is the kind of Cinderella story I want and the kind of Cinderella story Jessica Day George gave me.

Unfortunately, Jessica Day George falls into the same trap that so many writers get stuck in of having one fantastic character surrounded by somewhat bland characters. While Poppy was vibrant and colorful the other characters seemed almost colorless next to her.

I was enchanted by Poppy. Her personality and voice leaped off the page. She stepped off the page fully formed with interests and hobbies of her own. I understood her motives and found myself cheering her to victory. Even when Cinderella appeared and I felt the instant tug to cheer for the poor bedraggled serving girl to rise out of her miserable situation.

The world that felt undercooked in the first book clearly just needed a little more time in the oven because suddenly, in this book, it was perfectly imagined. I received a fully formed image of the continent Ionia (Jessica Day George’s version of Europe), a version of our world filled with hidden, dangerous magic. Darkness brews beneath the surface of a beautiful world of dancing and parties.

My only true complaint was that I missed Galen and Rose while reading the book. I sat there, flipping through pages, muttering “where’s Galen? Who are these people?” I came into the book already attached to certain characters who were nowhere to be seen but that did give me the chance to love someone new.

A definite recommend, especially if you loved the first book or are craving a different Cinderella story.

What are your thoughts on Princess of Glass? Sound off below…

Our romance-themed entertainment site is on a mission to help you find the best period dramas, romance movies, TV shows, and books. Other topics include Jane Austen, Classic Hollywood, TV Couples, Fairy Tales, Romantic Living, Romanticism, and more. We’re damsels not in distress fighting for the all-new optimistic Romantic Revolution. Join us and subscribe. For more information, see our About, Old-Fashioned Romance 101, Modern Romanticism 101, and Romantic Living 101.
Pin this article to read later! And make sure to follow us on Pinterest.
By Katrina Daroff on April 2nd, 2016