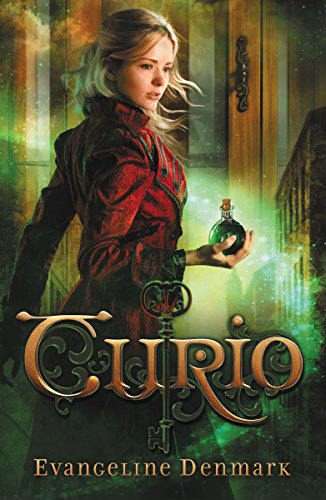 In Curio, Grey Haward lives in a world where Chemists oversee her every choice. Dependent upon a daily potion, which the leaders allow residents once a day, Grey’s family is special. Her grandfather and father possess the ability to survive without the potion, which leads her to question her own dependency. Even still, Grey tries to remain overlooked as the family protects their secret. Every night, a strict curfew is adhered to until one night when Grey’s best friend, Whit, takes the blame for Grey breaking curfew. He returns battered and in great pain, which prompts Grey to give up her potion to repay him and assist his survival. All of this is followed by a series of events that lead to Grey becoming of interest, and hunted by the Chemists…

To save her life, her grandfather’s shop assistant sends Grey through a wardrobe door, unlocked by a key Grey seems to have magical sway over. Inside this world, Grey is told to find “him,” only she doesn’t know who to look for. Inside the dangerous world, Grey sticks out as one of a kind and catches the eye of a volatile man who will stop at nothing to have what he wants…

Steampunk isn’t something I actively read. That’s not to say I wouldn’t wish to or that I don’t enjoy the world it infuses in the imagination, it’s simply an era/genre I haven’t traversed. Debut YA author (she’s co-authored two children’s books), Evangeline Denmark is ready to take this genre by storm with her wacky (best term scenario) and colorfully imaginative, Curio. This novel is one of the most unique I’ve read in a long time. The world building is phenomenal and I also thought the sense of adventure was in high form. Think along the lines of what something like Pirates of the Caribbean did for remaking swashbucklers, this novel is capable of for steampunk. Yes, it’s THAT entertaining.

Aside from its sense of adventure, there’s a moral sense of figuring out what’s right vs. wrong, and a power struggle between the evil in Grey’s world and the people who fight to right the sense of balance. Told in alternating worlds – Curio City and a small “western town,” the novel works well as a three-character narrative. Between Grey, Whit and Blaise (one of the characters Grey meets in Curio), the novel has multiple points of view and personality interests that serve it well. Because of this, there is more than one perspective, which allows the reader to grasp more of the world as seen through the eyes of the many characters, characters that are well developed to say the least.

Last but not least, there is the romance. The sizzling chemistry and sparks are crazy good. This follows suit with most YA novels and doesn’t solely focus on said romance (everyone is too busy trying to stay alive!), but what’s there is always teetering on the edge of fantastic potential. As we all know, this is just how any good romance begins. If you enjoy adventurous novels or any fantasy-esque young adult story, Curio is worth a look. It’s a hot-off-the-press release (January 5th) and even has a novella prequel, Mark of Blood and Alchemy, currently free on e-book platforms. I’ve not read it but suspect it’d give the interested reader an excellent notion of what to expect from the talented pen of Denmark, and Curio, the first in this new series.

This would make an amazing television series or film. Until such a time when this happens (that’s right, I’m saying “when” instead of “if,” and going with optimism), I’d recommend pairing Terry Pratchett’s Going Postal with this. It’s got the right “tone” of what I imagine some bits of this world being like. ITV adapted the Pratchett novel in 2010 into a two-part miniseries starring Richard Coyle (Lorna Doone) and Claire Foy (Wolf Hall, Upstairs, Downstairs).

Publisher: Blink (a division of HarperCollins)

Our romance-themed entertainment site is on a mission to help you find the best period dramas, romance movies, TV shows, and books. Other topics include Jane Austen, Classic Hollywood, TV Couples, Fairy Tales, Romantic Living, Romanticism, and more. We’re damsels not in distress fighting for the all-new optimistic Romantic Revolution. Join us and subscribe. For more information, see our About, Old-Fashioned Romance 101, Modern Romanticism 101, and Romantic Living 101.
Pin this article to read later! And make sure to follow us on Pinterest.
By Rissi JC on January 7th, 2016