“This morning, with her, having coffee.”
– Johnny Cash

When asked, this was Johnny Cash’s description of paradise. Who can blame him? Whether sitting in a quiet cafe, a noisy diner or at home, there is something intimate about sipping coffee with the one you love. The small tables, the reach to pour if you’re holding the pot, that sip you take as you lock eyes across the rim…sigh! It’s indulgently romantic. And who doesn’t love an indulgent romantic moment?

So, on that note, let’s start this morning off right. Kick back with a cup of your favorite brew and check out just a few indulgent romantic moments over coffee.

And a Cup of Coffee, Too – 8 Times Romance Came with a Dash of Java

If you have not seen Before Sunrise, I cannot recommend it highly enough. It is unapologetically romantic with smart dialogue and beautiful cinematography. The relationship between Jesse and Céline develops over the course of a number of intimate conversations. Such as this one where, over coffee in a traditional Viennese café, Jesse and Céline pretend to call their friends and tell them about a person they met on the train. During these “phone calls,” they reveal their first impressions of each other and ultimately, how they feel.

Arrow’s Oliver and Felicity bring their romantic tension wherever they go, so it was no surprise to find it simmering in Central City. While Felicity may refuse to bring Oliver coffee in the office (seriously, who can blame her?), that doesn’t mean she won’t enjoy a cup of java with him. Who could resist staring into Oliver’s baby blues over the rim of a steaming latte? Not me, no, not me at all. Apparently, Oliver can’t resist Felicity’s baby blues either because this exchange was hot. Hot. HOT. There were two conversations going on here; one out loud and the other with their eyes. With these two in close proximity, it’s safe to say their coffee was never in danger of getting cold.

Luke and Lorelai shared plenty of “will they or won’t they” moments over coffee. From the very first episode until they finally did, until they didn’t, and then they did again, coffee was an integral part of their relationship. Some of their most revealing conversations occurred in Luke’s diner. And a few of their more flirtatious moments. Such as this moment where Luke and Lorelai flirt over the nutmeg Luke added to the coffee. Or, how they both stared yearningly at Jackson and Sookie’s first date. Even better, how a blushing Luke fumbled his words while trying to ask Lorelai out. 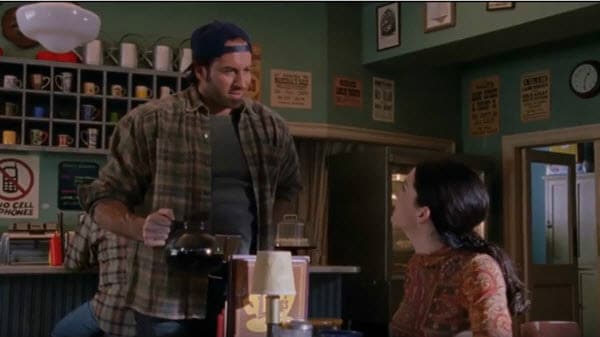 Bonus: Luke may not have finished what he wanted to say to Lorelai the night before, but the next morning, over another pot of coffee, he finally does and it’s coffee magic!

The awkward first meeting of awkward first meetings. Yet, it is magic. When Toula first spies Ian, she can’t help but stare. Almost trance-like, she wanders over to his table and then just stands there. Staring. It takes a moment for her to snap out of it, but when she does, it’s with self-deprecating humor. Toula is unexpectedly charming and witty. Ian clearly appreciates her humor and interest sparks in his eyes. All of this happens in the blink of an eye as Toula stands there, holding a pot of coffee. Personal Greek statue indeed!

A modern retelling of My Fair Lady, Selfie didn’t last beyond 12 episodes. However, the few episodes that aired were enough for fans to fall in love with Eliza and Henry. From the moment Henry took Eliza under his wing, it was clear she was taking him under her wing too. Chemistry sizzled and the lecturing discussion over how to engage in conversation over coffee only hinted at the banter to come.

When Harvey and Donna first meet, innuendo fills their conversations. Yet, beneath it all, there’s a very real sense of a friendship and partnership forming. This first cup of coffee cements that fledgling loyalty. Donna spells out the term of their arrangement. She’ll have his back. He’s to have hers. And in the meantime, he will take his coffee the way she tells him, too! After all, she’s Donna.

The tension in Vertigo begins immediately and never lets up. It’s not all suspense. Romantic tension ebbs and flows throughout. In some instances, the romantic intensity is palpable. Such as this scene, where John “Scottie” Ferguson questions Madeleine after rescuing her from the cold San Francisco Bay. Both are playing a role. Yet, only one knows that none of this is real. The intimacy heightens as Scottie plies Madeleine with questions – and coffee to warm her up.

Kathleen Kelly and Joe Fox certainly got off on the wrong foot. At least in person. However, their relationship gradually changed. After a rocky conversation over coffee that left both confused and despondent, Joe tried a new approach. He was successful and their conversations became more personal. Like this one where Kathleen confides in Joe, over a cup of joe, about her online mystery man…..who just happens to be Joe.

Nothing like a dash of romantic moments to sweeten your first cup of java in the morning! Do you have a favorite romantic moment over coffee? Perhaps it’s from Amélie or The Coffee Prince. Or, maybe it’s over a pot of tea! Whatever it is, share below! Tell me, what’s your barista serving today?

Our romance-themed entertainment site is on a mission to help you find the best period dramas, romance movies, TV shows, and books. Other topics include Jane Austen, Classic Hollywood, TV Couples, Fairy Tales, Romantic Living, Romanticism, and more. We’re damsels not in distress fighting for the all-new optimistic Romantic Revolution. Join us and subscribe. For more information, see our About, Old-Fashioned Romance 101, Modern Romanticism 101, and Romantic Living 101.
Pin this article to read later! And make sure to follow us on Pinterest.
By Catherine on July 31st, 2017