Now considered something of a modern-day, cult classic, Clueless is a coming-of-age, satirical rom-com, loosely based on none other than Jane Austen’s classic, Emma.

Instead of the pastoral English countryside à la early 19th century, the setting is now the urban, glitzy glamor of the Hollywood Hills near the close of the 20th century. Amy Heckerling writes and directs. Alicia Silverstone stars, along with Paul Rudd, Stacey Dash and Brittaney Murphy.

Like Austen’s Emma Woodhouse, Cher Horowitz (Alicia Silverstone) is loved, lovable, intelligent, full of potential, spoiled, self-absorbed, superficial, meddling. In short, she is clueless. And she is in dire need of growing up, getting a clue and beginning to see beyond her own little, materialistic world.

Sixteen-year-old Cheryl “Cher” Horowitz is the beloved daughter of a wealthy, widowed, litigation lawyer, Mel (Dan Hedaya). Her mother died due to complications from liposuction surgery when Cher was just a baby. Cher’s father has had multiple wives since. Cher is the ex-stepsister to Josh (Paul Rudd), the bantering son (and Mr. Knightley-type!) of one of Mel’s ex-wives. Josh is back in town to study at university and is often hanging out in the Horowitz mansion in Beverly Hills.

Cher wants for nothing material, has an expansive closet full of expensive clothes and drives around in a brand-new Jeep, despite not having a license. Her best friend is Dionne (Stacey Dash). They both attend a posh high school. Cher has no interest in high school boys and is Queen Bee of the school.

When Cher’s debate teacher, Mr. Hall, refuses to negotiate on her C-grade, Cher decides that the only way to get this miserable man to change her grade is to make him happy. Thus, begins Cher’s matchmaking. Cher decides to set up another frazzled teacher, Ms. Geist, with Mr. Hall, by sending anonymous love notes, spreading rumors, subtly and not-so-subtly matchmaking.

And she doesn’t stop there. When a new girl, Tai Frasier (Brittany Murphy), transfers to the school, Cher takes her under her wing, making her over in her own image and setting her up with the school hottie, Elton. All this, despite the rather passive Tai’s own inherent and obvious interests and desires in other things, including the skater boy, Travis Birkenstock, of whom Cher disapproves.

Cher, then, sets herself up with the newly returned classmate, Christian, whose aloofness and elusiveness suggest interests elsewhere. Although Cher cannot imagine anyone not liking her, he doesn’t respond to her advances. And through all these high school matchmaking intrigues with their requisite parties and dramas, there is the steady, stick-in-the-mud, Josh, with his witty repartee, teasing banter, challenging insights and probing questions. He, alone, seems to withstand Cher’s manipulations.

Can Cher stop her meddling and manipulations? Can she grow up, get a clue, see beyond the surfaces, and maybe even find some real love of her own?

The Transformation of Miss Cher Horowitz

Clueless is about a spoiled, selfish, rich girl getting a clue and getting over herself, getting over her desire to play with others’ lives and loves, and deciding to use her substantial talents to better ends than shopping and manipulating. Because Cher does have substantial talents and good intentions, despite her materialistic, superficial bent. You just can’t hate her.

And you just can’t hate Clueless. It is a credit to the production that – despite the satirical tone, the near-spoof nature of it all – it keeps its heart warm and its message rather serious. Yes, it is an ironic castigation of consumerism and materialism on the one hand. Just see all the girls with post-nose-job plasters and the glitzy clothes and the ubiquitous cellphones and the dialogue, which is sprinkled with all sorts of nineties’ gems like:  totally bugging, hauling a–, like, whatever, as if, way harsh, totally choked, betty, dude, duh, surfin’ the crimson wave and booking it, to name but a few. Clueless is steeped in irony, and our clueless Cher delivers some wonderfully ironic insights, all said with deadpan naivety and earnestness. It is comedic gold.

And yet – and yet – on the other hand, Clueless is never so cruel in its satire as to alienate the audience from the characters. I am rooting for Cher, rooting for her to become a better person. I like her, despite her many, many flaws. The girl has potential, so much potential for good in this world, and I want her to realize it. And it is this juxtaposed tension of the irony and the earnestness that makes Clueless such a viewing pleasure, such a modern-day cult classic, worthy of its classic literary predecessor.

That, and the great chemistry between all the cast. It does just swing. Alicia Silverstone is fantastic in this role. Brittany Murphy is a delight as the ditzy Tai. The perennially boyish Paul Rudd makes a fine Mr. Knightley-type in my books, and the bantering chemistry between he and Silverstone is good, good stuff. Truly, Clueless is a classic, fun and funny nineties’ time capsule of a timeless classic. 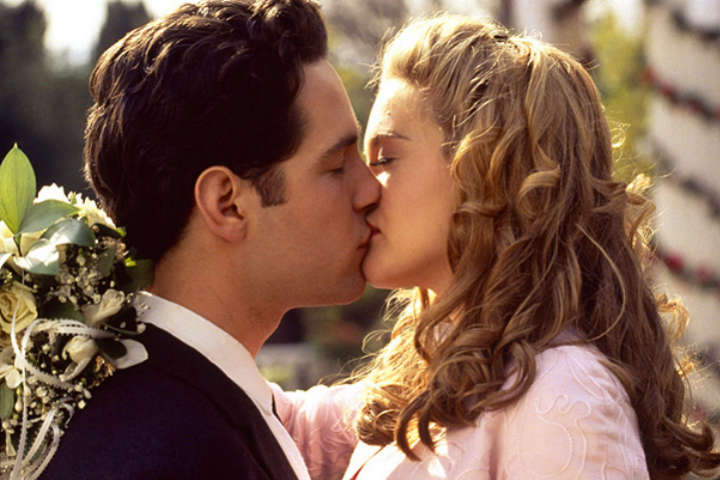 Content Note: Rated PG-13 for sex-related dialogue, minor swearing and teen use of alcohol and drugs.

Do you love Clueless? What’s your favorite part of this classic teen rom-com?

Our romance-themed entertainment site is on a mission to help you find the best period dramas, romance movies, TV shows, and books. Other topics include Jane Austen, Classic Hollywood, TV Couples, Fairy Tales, Romantic Living, Romanticism, and more. We’re damsels not in distress fighting for the all-new optimistic Romantic Revolution. Join us and subscribe. For more information, see our About, Old-Fashioned Romance 101, Modern Romanticism 101, and Romantic Living 101.
By Jessica Jørgensen on March 21st, 2018