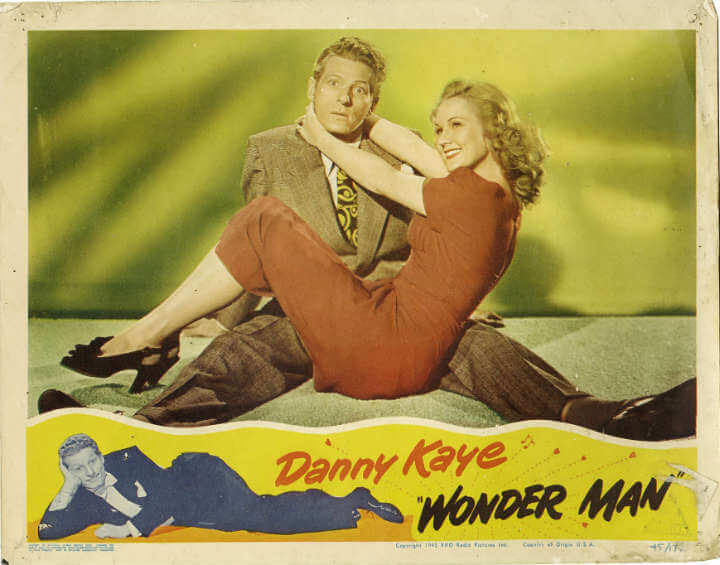 In this day and age, a movie with the title Wonder Man might conjure up visions of superheroes. Surprisingly, the 1945 Danny Kaye comedic fantasy is not about a male counterpart to Wonder Woman, but it does have a lot of excitement and action, and some very interesting special effects. If you are a fan of Danny Kaye, you’ll have an idea of some of the fun this movie has to offer, but you might still get some surprises. If you’re not familiar with his work, prepare yourself for an entertaining, fun, and silly romp of a movie. 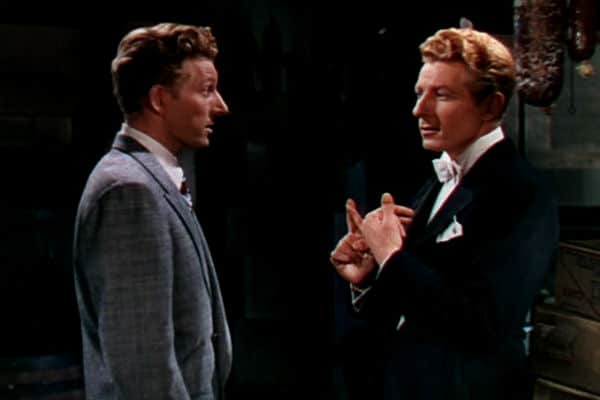 The story revolves around twin brothers both played by Danny Kaye. In the usual tradition of film twins, they could not be more different. Buzzy Bellew is a nightclub singer who is both charming and disarming. He’s talented, rambunctious, incredibly thoughtless and cocky. His twin brother Edwin Dingle is the typical Danny Kaye character – nervous, gentle, socially awkward. He is also incredibly intelligent – a genius in fact. He spends all his time in the library doing research (while writing his notes with both hands at the same time! Apparently this is what geniuses do.)

All Edwin wants to do is read his complex books, but a librarian named Ellen (Virginia Mayo) proves to be a distraction. Ellen clearly admires Edwin’s amazing intellect and clearly thinks he is adorable. When she invites him to dinner, he agrees, and the two begin to recognize their mutual attraction.

Unfortunately, this happy interlude in Edwin’s life is short lived. His brother Buzzy’s life is paradoxically chaotic. Buzzy has witnessed a hit by some gangsters, and he’s the main witness. Despite threats, he refuses to have protection and goes about his life unconcernedly, performing every night, dazzling everyone around him including his fiancée Midge (played by Vera Ellen) who he has stood up at the altar more than once.

Not surprisingly the gangsters manage to get close to Buzzy and kill him, dumping his body in a river in Brooklyn, but that’s not the end of Buzzy, and it’s the beginning of Edwin’s troubles.

Across town, Edwin begins to hear strange music and feel compelled to go to Brooklyn though he doesn’t know why. He must give in to the compulsion even if it means leaving Ellen in the middle of their romantic date and freaking everyone he meets out with his outbursts and confused ramblings. In Prospect Park he comes across his brother still clad in his full evening dress. The haunting of Edwin Dingle has begun.

Somehow the ghost of Buzzy has been able to come back to finish what he started. He can’t be seen or felt by anyone, but he can possess his brother (whether Edwin likes it or not), and Buzzy is determined to make sure the gangsters pay for their crimes.

The mad cap twists of this tale are the perfect outlet for Danny Kaye’s talents. Anyone familiar with his work knows he tends to play the same gentle, endearing, awkward character all the time. It’s such an amusing persona though, you don’t mind because you are enjoying yourself so much. However, Wonder Man also allows Kaye to play with a different personality in Buzzy. We know this type of character – think Jerry Lewis’s alternate self in The Nutty Professor though thankfully a little less cold. Buzzy is more a playful, thoughtless man-child, and Kaye does the character justice. You can almost understand why everyone else likes him enough to let him get away with his carelessness.

He doesn’t seem to mind that he is imposing on his brother very much – a brother he hasn’t bothered to communicate with in years. He pleads with Edwin to take his place, putting his twin in danger once the gangsters find him roaming around, but he doesn’t seem too worried. The fact that he stands Midge up so often is a good example. His ghost isn’t concerned about making any amends with her. All his focus is on the people who killed him.

Related | My Journey Into Old Movies: The Ghost and Mrs. Muir

But this is a zany, slapstick comedy, so these topics are handled lightly and with humour. For instance, Midge views Buzzy’s foibles with amused indulgence and in true musical fashion, she works off any bad feelings with a rousing performance on stage. One of the best in the movie.

Kaye does a great job in his dual role. He not only plays the completely different Edwin and Buzzy, but he ends up playing Edwin being influenced by Buzzy. The crazy shenanigans which stem from this are sure to inspire lots of laughs. 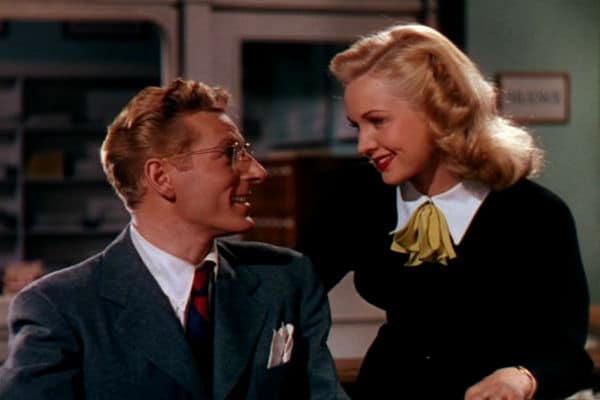 The other actors provide a lively supporting cast. Vera Ellen is delightful and radiant as Midge. This is her first movie, and she does a fantastic job.

Virginia Mayo is one of my favourites. She’s intelligent and independent and proves to be the kind of love interest Edwin needs, charmingly taking the lead when she realizes that they have a mutual attraction because he won’t and inspiring him to come out of his shell.

She’s an important part of the plot as well. As Edwin struggles to deal with the dangers that beset him in his guise as Buzzy, she is hard at work trying to help him. Like Midge, she also has a lot to put up with, but she determinedly does her part to help Edwin come out of his crazy adventures safely. Her romance with Edwin is rather overshadowed by the shenanigans with Buzzy, but they are sweet and adorable when they are not being haunted by the mischievous twin.

Besides the acting and comedy of Wonder Man, you can also expect to enjoy some fun visuals. This film won the Oscar for Best Special effects and it is clear why. They are very well done. The scenes with Edwin and Buzzy together are believable and don’t distract from the film.

As I mentioned, the musical numbers are captivating.  As usual, Kaye performs his signature comedy. At one point, for example, he does an impression of a singer with a flower allergy trying to keep singing even when some places a huge bouquet on stage.  Vera-Ellen is a fantastic dancer, and she shows this off for full effect as she performs “So In Love”. While this is not a full-on musical, the acts add to the overall merriment and fun.

By the end of Wonder Man, the audience will have come through all the zaniness thoroughly amused and satisfied with Edwin’s adventures. This is definitely one of Danny Kaye’s best movies. It’s perfect for his fans as well as anyone in the mood for a good comedy. Hilarity is guaranteed. You can find it on DVD on Amazon. 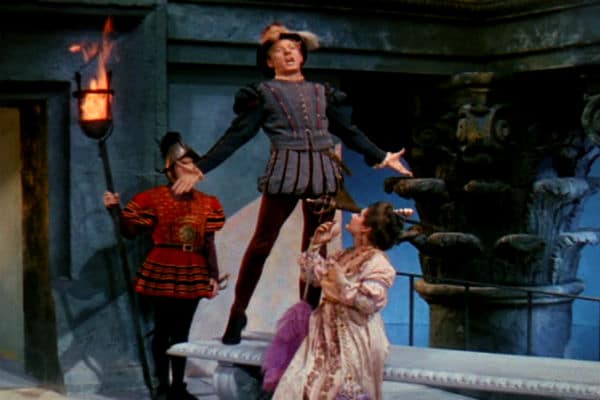 What do you think about Wonder Man? Sound off below…

Our romance-themed entertainment site is on a mission to help you find the best period dramas, romance movies, TV shows, and books. Other topics include Jane Austen, Classic Hollywood, TV Couples, Fairy Tales, Romantic Living, Romanticism, and more. We’re damsels not in distress fighting for the all-new optimistic Romantic Revolution. Join us and subscribe. For more information, see our About, Old-Fashioned Romance 101, Modern Romanticism 101, and Romantic Living 101.
Pin this article to read later! And make sure to follow us on Pinterest.
By Dixie-Ann Belle on April 22nd, 2017