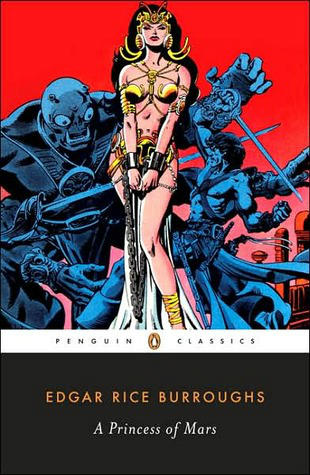 A PRINCESS OF MARS BOOK REVIEW

A Princess of Mars, published in 1912, is a great read for any lover of the fantasy/sci-fi genre. It is the precursor to many of our modern science fiction stories, right up there with the influential works of Jules Verne, C.S. Lewis, Mary Shelley, and other great parents of our Sci-Fi genre.

RELATED Go On A Quest With The Last Unicorn: Vintage Book Review

I was a little apprehensive of the book when I first opened it up. I’m personally against first person narratives. They feel like a way for the writer to force you to feel what they want instead of letting you make the leaps yourself. As a reader, I dislike it. So when I opened the book and started reading a first person speaker with a very western dialect, I inwardly groaned. I’m only sharing this because I believe there are other readers like me out in the world and, if you are like me, don’t fret, the book gets so much better.

The two things that made A Princess of Mars really great were the descriptions and the strong correlation between the Tharks and the Native Americans we see early in the book.

The reader gets to see Mars through the eyes of a southern Civil War captain who has gone out west to seek his fortune, as many southern soldiers did after the war of northern “aggression.” And he describes things in the way any well taught southern gentleman would.

Captain John Carter spares no detail. Everything is meticulously documented with a clear reflection on what he “should” have done and why he didn’t. It is told in the way an uncle or grandfather might tell a story, getting distracted half the time by what “might” have been better. Which, if you read the introduction, kind of is the premise of the book. He doesn’t hold back details just because he did not know them yet, instead he explains exactly what something is for and says, “I didn’t know that at the time.”

The other aspect of the novel I particularly liked was the correlation between the Tharks and Native Americans in the story. It’s pretty easy reading; I think the narrator even makes that leap for the reader. We start off the book following John Carter as he tries to evade a group of Apache then he is magically transported to Mars and meets the Tharks, who are the less “civilized” society on Mars. The thing is, they are the good guys.  They rescue John Carter and make him a part of their tribe. It’s not the sort of plot twist you would expect from a story of that time period and that is why I love it so much.

A Princess of Mars also has a fair amount of romance with a wonderful female character. The princess of Mars is brave and intelligent and the book is worth reading just for her.

The book is worth reading if you appreciate Sci-Fi or even Mars. Plus, Edgar Rice Burroughs has a unique writing voice that takes a little time for our modern ears to get used to but is well worth the effort. And while the book is not entirely scientifically accurate, it does have a few interesting tidbits. It’s amazing what we knew about Mars even in 1912.

In all, A Princess of Mars is definitely worth the read. Do enjoy.

Have you read A Princess of Mars? What are your thoughts on this classic book?

Our romance-themed entertainment site is on a mission to help you find the best period dramas, romance movies, TV shows, and books. Other topics include Jane Austen, Classic Hollywood, TV Couples, Fairy Tales, Romantic Living, Romanticism, and more. We’re damsels not in distress fighting for the all-new optimistic Romantic Revolution. Join us and subscribe. For more information, see our About, Old-Fashioned Romance 101, Modern Romanticism 101, and Romantic Living 101.
Pin this article to read later! And make sure to follow us on Pinterest.
By Katrina Daroff on July 4th, 2016