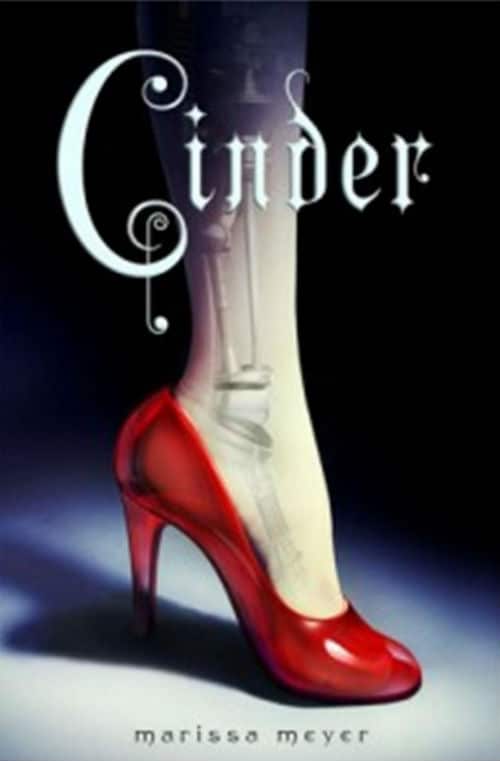 Recently, I discovered Cinder by Marissa Meyer. I looked at it and was very intrigued, but not quite enough to buy it in hardcover. One day, after I had finished my thesis, I found it on Amazon for a great deal. When it arrived, I read it in a day. Cinder is book one in The Lunar Chronicles, a five book series that reworks Cinderella, Red Riding Hood, Rapunzel and Snow White in a futuristic setting (Fairest, which came out recently, tells the story of the Evil Queen). Basically, Cinder is Cinderella in the future with cyborgs and a culture living on the moon after World War IV, and the other novels build on that. And it works. I admit, post-apocalyptic literature isn’t my favorite, but something about the idea just made me curious. It was a beautiful blend and I enjoyed every page. If you haven’t read much YA in the sci-fi/fantasy genre, this series has a lot in common with dystopian fiction like The Hunger Games by Suzanne Collins and the Divergent Series by Veronica Roth. They all have a strong female protagonist who struggles with her new role in her broken world.

Cinder has some aspects of the classic Cinderella story; there is a kind orphan forced to work for the stepfamily that doesn’t care for her, she meets and falls for the prince of the land and she loses a shoe (though in Cinder’s case, she actually loses her cyborg foot). Most of the rest of the story, however, is different. Cinder was an orphan from the get-go, and as the story unfolds we learn that she has a very mysterious past that is just beginning to unfold. Rather than meet the prince at the ball, she meets him professionally as the best mechanic in the city. He is given a name, Kai, his own unique problems, and character development. Kai hires Cinder to repair a palace droid and they slowly realize that they have feelings for each other over the course of the story.

The tale is further complicated by a plague that is ravaging Earth and the consequences are far reaching. The disease is not a background conflict and beloved characters will die. Cinder’s sister, the one person in her stepfamily that she likes and is liked by, is infected with the plague and Cinder is chosen as a guinea pig, thanks to the Cyborg Draft. While that sounds confusing, without giving anything away, I’ll just say that the government needed to pick someone to experiment on to find a cure, and since the cyborgs were second class citizens, they were selected. At least, that was the official reason. One Doctor in particular seems to have another reason to bring in cyborgs and run tests on them (which will become apparent as you read further).

Meanwhile, Levana, Queen of the Lunars (who lives on the moon) comes to Earth to try to broker a marriage alliance with Prince Kai. While she claims to be peaceful, the general consensus is that she is planning for a takeover of Earth. She lives in fear, however, because of the rumor that the rightful heir to the throne, Princess Selene, is alive somewhere on Earth. As he tries to broker peace and falls for Cinder, Kai is also hunting for Selene, the only person who can stand up to her power-crazed aunt. You see, Lunars have magical powers to manipulate both their appearances and other people, called a Glamour. In this world, only another royal Lunar can counter Levana, hence the desperate hunt for Princess Selene.

While it was fairly easy for me to guess that name of person here is actually another person here, (no spoilers here) the journey that Meyer takes her characters, and us, as a result, on to get there, is well worth the read. The characters react in understandable and relatable ways and none of them seem too perfect, making the book that much more fun to read. Characters make mistakes, and Meyer doesn’t let her characters off the hook; those mistakes have consequences. The book leaves the romance hanging, but I have high hopes for resolution as the rest of the series progresses. For a retelling of Cinderella, often seen as a fairly shallow tale, Cinder deals with a lot of issues. These issues include not only cyborgs and interplanetary politics, but also prejudice, standards of beauty, familial love, abuse of power and duty.

Overall, this is a beautiful and exciting start to what promises to be a series worth reading. My only complaint is that it is too short. I could have read more in-depth about these characters for a few hundred more pages. Additionally, I found myself wanting more description about the world these characters are living in (though that might be the anthropologist in me). However, I understand that this is just book one of five, and there will be a lot more revealed as the series goes on. And really, at 387 pages, this is pretty good sized as it is.

Most everyone has their specific genre weakness when it comes to fantasy/sci-fi, and mine is fairy tales. I love the way authors have of taking these classic stories and reshaping them. The overall story and its charm are still intact, but it’s packaged differently. You’ve got your grittier Confessions of an Ugly Stepsister by Gregory Maguire, your fluffier Wildwood Dancing by Juliet Marillier, and a wide range in between like Ella Enchanted by Gail Carson Levine. Authors are either trying to be more realistic ala Christopher Nolan’s Batman trilogy or embracing the fantastic elements, or doing both. So when I see a new author with a fresh spin on these “tales as old as time,” I get excited. YA fiction, in particular, is full of fantastic fairy-tale retellings, and this is no exception.

At this point in the series, I think the series would be best adapted as a series of films, to allow for a budget that supports the many special effects that would be needed to accurately show this lush world full of science and magic. The flashbacks in the text and the short stories that have been released would be able to be integrated into the main plot with relative ease and the movie would be fun, exciting and likely gorgeous. Cinder is the kind of in-between story retelling; it’s gritty with real stakes, but also enjoyable and fun.

Our romance-themed entertainment site is on a mission to help you find the best period dramas, romance movies, TV shows, and books. Other topics include Jane Austen, Classic Hollywood, TV Couples, Fairy Tales, Romantic Living, Romanticism, and more. We’re damsels not in distress fighting for the all-new optimistic Romantic Revolution. Join us and subscribe. For more information, see our About, Old-Fashioned Romance 101, Modern Romanticism 101, and Romantic Living 101.
Pin this article to read later! And make sure to follow us on Pinterest.
By Bailey Cavender on May 18th, 2015

6 thoughts on “Cinder Book Review: Cinderella in the Future with Cyborgs”