Elizabeth Lane (Barbara Stanwyck) is a famous and beloved columnist for a national magazine. Her monthly articles feature delicious recipes for fancy meals.  They also describe her idyllic home life as a loving wife and mother who lives on a farm.

Her publisher, Alexander Yardley (Sydney Greenstreet) receives a request to provide a family-style Christmas for a naval war hero. So, he decides Elizabeth should be the host and invites himself along.

His demands throw Elizabeth into a panic. Unbeknownst to Mr. Yardley and her public, she is a fraud. In reality, Elizabeth Lane is a single woman who writes her articles from her New York apartment and has zero talent in the kitchen. Her close friend, Uncle Felix (S.Z Sakall) actually provides the recipes which she features in her articles.

In danger of losing her job, Elizabeth agrees to an engagement with her friend John Sloane (Reginald Gardiner) who just happens to have a farm in Connecticut. They decide to continue her ruse and even manage to find a baby to pose as their child. Uncle Felix accompanies them to cook the meals Elizabeth Lane is famous for.

Elizabeth Lane: The things a girl will do for a mink coat.

However, all these plans are thrown into turmoil with the arrival of the war hero, Jefferson Jones (Dennis Morgan). It is love at first sight between Elizabeth and Jeff, but he thinks she is married. Further complications ensue as Mr. Yardley starts making plans for the Elizabeth Lane “family” in order to increase his magazine’s circulation. Meanwhile, Uncle Felix contrives to keep Elizabeth from marrying John.

Christmas in Connecticut is a holiday classic and one of my favorites, with good reason. This romantic comedy is just downright fun to watch. Sure, the story becomes a little farfetched at times, but the characters more than make up for it.

Barbara Stanwyck was a prolific and talented actress. Generally, she played women who were jaded by life and tough as nails. As Elizabeth Lane in Christmas in Connecticut, she portrays a softer sort of woman. One who has done what she needs to do to provide for herself, but who is also innocent enough to be caught up in the wonder of love. She glows. Her utter discomfort with any homemaking task is both obvious and endearing. But it also requires the viewer to suspend their belief that none of the men ever notice this. 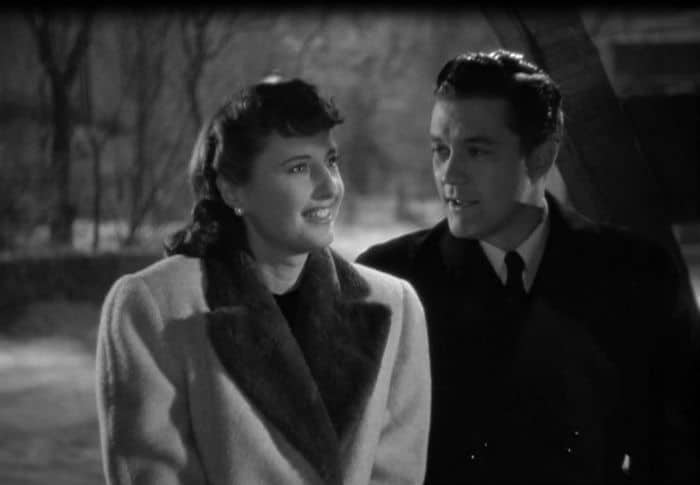 Elizabeth Lane: Don’t you come near me, you seawolf, after the way you deceived me…

Jefferson Jones: I deceived you?

Elizabeth Lane: That has nothing to do with it!

Though Stanwyck is the star, character actor S.Z. Sakall steals the show every time he appears on screen. His Hungarian Uncle Felix acts as the comic relief and has the best lines. This is only enhanced by his mispronunciation of certain words, much like Ricky Ricardo in I Love Lucy. He is also a mischievous little Cupid who can’t keep from meddling in Elizabeth’s life.

The other men all fill their respective if stereo typical roles. Morgan is a charming if somewhat naïve leading man. Gardiner plays his usual role of the dull and clueless boyfriend who doesn’t seem to notice his fiancée is falling for another man. I do love seeing Greenstreet as Elizabeth’s publisher. Generally cast as a villain, it is refreshing to see him play the overbearing catalyst for most of the film’s events. He gives the jolliest “Santa” laugh at the conclusion of the film. Fun Fact: Greenstreet and Sakall also co-starred in Casablanca.

Christmas in Connecticut combines all the elements for a charming holiday film. With a talented cast, cozy setting, and a slightly ridiculous script, it is the perfect family film to invoke Christmas happiness and nostalgia.

Where to Watch: Stream on Amazon Prime, Rent on Amazon and iTunes or purchase on DVD.

Have you seen Christmas in Connecticut? What are your thoughts on this classic movie? Let me know in the comments.

Our romance-themed entertainment site is on a mission to help you find the best period dramas, romance movies, TV shows, and books. Other topics include Jane Austen, Classic Hollywood, TV Couples, Fairy Tales, Romantic Living, Romanticism, and more. We’re damsels not in distress fighting for the all-new optimistic Romantic Revolution. Join us and subscribe. For more information, see our About, Old-Fashioned Romance 101, Modern Romanticism 101, and Romantic Living 101.
By Brittaney B. on December 20th, 2017