I am Texas born and bred and have lived in the state for most of my life. But fortunately, I had the opportunity of living in New Hampshire for one year.  Even though it was short, my time there impacted me deeply and left me with some great memories.

One of the original thirteen colonies, the Granite State is full of history and beauty. With a state motto, “Live free or die” New Hampshire values its’ independence as much as my own home state.

Personally, I have fond memories of summertime at Salisbury Beach and skiing at Gunstock Mountain in the winter.  Elsewhere, many people rave about the stunning Autumn colors, but no one told me that Spring rivals Fall for its’ beauty. I loved the little rotaries at smaller intersections, the fierce love of Dunkin’ Donuts, the Patriots and the Red Sox, eating lobster rolls and fluffernutter sandwiches. Moreover, New Hampshire has its own twist on English too, calling water fountains a bubbler, using wicked as an adjective to describe something good. Even years later after moving back to Texas I still call carbonated beverages sodas, thanks to my brief time in New Hampshire.

Meanwhile, the state’s also known for being the first state to hold primaries in Presidential elections. I lived there during an election year and remember receiving numerous campaign phone calls and seeing the downtown buildings of Manchester wallpapered with campaign posters. Furthermore, New Hampshire was home to Robert Frost and also boasts the beautiful campus of Dartmouth College, an Ivy League university.

Overall, I thoroughly enjoyed living in New Hampshire and am grateful for the time I spent there. So, to celebrate National New Hampshire Day, I am sharing some films that were set or filmed in this gorgeous state.

Where to Watch: Stream on Amazon Prime, Rent from Vudu, YouTube, Google Play, and iTunes. Purchase on DVD. 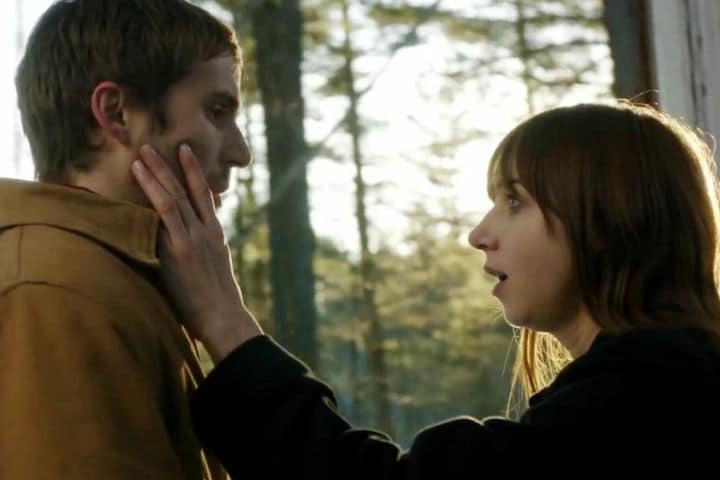 This little romantic fantasy has been reviewed on our website. It tells the story of two young people living across the country from each other. They somehow form a telepathic bond which enables them to experience each other’s circumstances and emotions. The female character lives in New Hampshire and scenes were filmed in the towns of Manchester, Concord, Hooksett, Claremont, and Exeter.

RELATED |  In Your Eyes (2014): A Unique, Fantastical Paranormal Romance

Where to Watch: Rent/Buy Amazon or iTunes

Content Note: This is not rated but includes for a couple of brief sex scenes, partial nudity, and some profanity.

Based on a Henry James novel and directed by James Ivory, this tells the story of two adult siblings who travel to New England in 1850 to meet their American relatives. It’s a clash of cultures when these elegant, sophisticated Europeans meet their more Puritanical cousins. It features some scenes filmed in New Ipswich.

Where to Watch: Available on DVD

I wasn’t able to find out much about this film other than this synopsis from IMDB, “Eugene Devlin, a once famous, now reclusive poet, searches through his past, looking for redemption and peace.” But, it has an eclectic cast including Chevy Chase, Bonnie Wright, Tom Sizemore, Eric Roberts and Campbell Scott. And it was filmed in Franconia.

Where to Watch: Rent/Buy on Amazon, Vudu, YouTube or iTunes

Content Note: This is unrated and there are no notes on the content. Watch at your own risk.

A classic film which features an idealized view of the simple life of an average family. The Gibbs and the Webb families are neighbors. Their young son and daughter begin to fall in love as they reach adulthood. The film follows them as they eventually marry and have a family of their own. Based on a play by Thornton Wilder and remade in 2007.  It stars many popular actors of the time including William Holden, Thomas Mitchell, Martha Scott and perennial mother Beulah Bondi. It’s set in New Hampshire.

A mid-life crisis precipitates a change for a reserved English teacher. He begins selling encyclopedias door to door while he contemplates the meaning of life. Fans of The Vampire Diaries will recognize Ian Somerhalder and Daniel Gillies in supporting roles.  Filming took place entirely in Peterborough.

Adapted from a coming of age novel by John Knowles, this is the story of two young boys. They are opposite in personality but become best friends. Jealousy causes Gene to act in a way that injures Finn without his knowledge. Eventually, Gene’s secret is revealed which leads to healing between the boys, but with a tragic result. Filming locations include Exeter and Newfields.

Where to Watch: I’ve only been able to find it available on VHS tape.

Not much information exists about this movie’s plot. The IMDb synopsis reads, “Brad Adams is the new manager of a manufacturing plant in a small New Hampshire town. He is brought in by owner Mrs. Doubleday to calm labor relations plus layoff employees. Brad manages to also find romance.” It co-stars silent screen star Lillian Gish and was filmed in Dover.

Where to Watch: As of this posting, this is completely unavailable.

Most people are familiar with this Bill Murray comedy about a psychiatrist whose patient bonds too closely with him and then won’t leave him alone. None of the filming locations are in New Hampshire, but the Doctor takes a family vacation to a New Hampshire lakeside cottage.

Where to Watch: Rent/Buy on  Amazon, iTunes, YouTube, Google Play and Vudu. Purchase on DVD.

Film star Adam Sandler is actually a native of the state and is extremely loyal to his home. So, it’s no surprise that a few of his movies feature shout-outs to New Hampshire. This is actually a remake of the classic Mr. Deeds Goes to Town. An average small town guy suddenly finds himself in the national news when he unexpectedly inherits a huge fortune.  The original starred Gary Cooper and Jean Arthur with Mr. Deeds being a resident of Mandrake Falls, Vermont. This updated version makes Deeds a resident instead of the fictional Mandrake Falls, New Hampshire.

Where to Watch: Buy from Amazon, YouTube, Google Play, iTunes, and Vudu or purchase on DVD.

The real Daniel Webster was born in New Hampshire. He was, of course, the author of Webster’s Dictionary.  In this fantasy film, a New Hampshire farmer makes a deal with the devil only to be rescued by the wordsmith skills of Daniel Webster himself. Stars some of the top character actors of the Forties such as Edward Arnold, Walter Huston, Jane Darwell, Anne Shirley, Simone Simon among others.

Where to Watch: Stream on FilmStruck, Rent/Buy on Vudu or purchase on DVD.

Have you ever visited New Hampshire? Have you seen any of these films?

Our romance-themed entertainment site is on a mission to help you find the best period dramas, romance movies, TV shows, and books. Other topics include Jane Austen, Classic Hollywood, TV Couples, Fairy Tales, Romantic Living, Romanticism, and more. We’re damsels not in distress fighting for the all-new optimistic Romantic Revolution. Join us and subscribe. For more information, see our About, Old-Fashioned Romance 101, Modern Romanticism 101, and Romantic Living 101.
Pin this article to read later! And make sure to follow us on Pinterest.
By Brittaney B. on September 7th, 2018