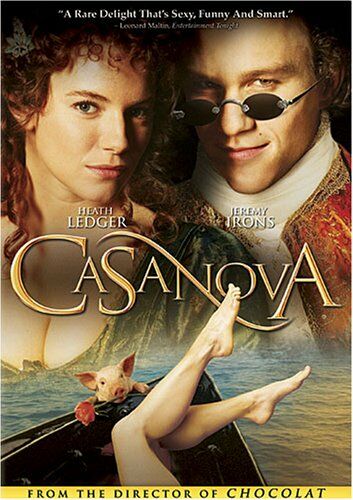 It’s been ten years, and I can still remember when this was a film not yet in theaters let alone DVD. Before it even saw completion, I was curious about its existence because a.) there was Heath Ledger and b.) it was a period drama. It wasn’t until the film was saddled with an R-rating that I became less enthused by it. Eventually, I did see Casanova and was surprised by what a meaningful and romantic comedy this is.

It follows Heath Ledger’s Casanova, a Lothario who doesn’t seem to care about the destruction or string of broken hearts he leaves behind. His latest brush with the law is too close for comfort, so much so that his friend and protector insists he take a respectable wife lest he be banned from Venice. Leaving Venice is out of the question. You see he’s waiting for the mother who abandoned him as a child. The fact that he’s left Venice with very few virtuous women makes it a challenge to find someone of highborn status and a virgin.

Eventually, he sets his sights on Victoria (Natalie Dormer), a beautiful virtuous girl who seems to want to wed Casanova. Then he meets the independent-minded Francesca (Sienna Miller). The more chance encounters he has with Francesca, the more she changes his thinking… and his heart. Only trouble is, Francesca is betrothed to someone else. Thus begins a complicated and hilarious case of mistaken (and imagined) identities that are as humorous as they are meaningful. 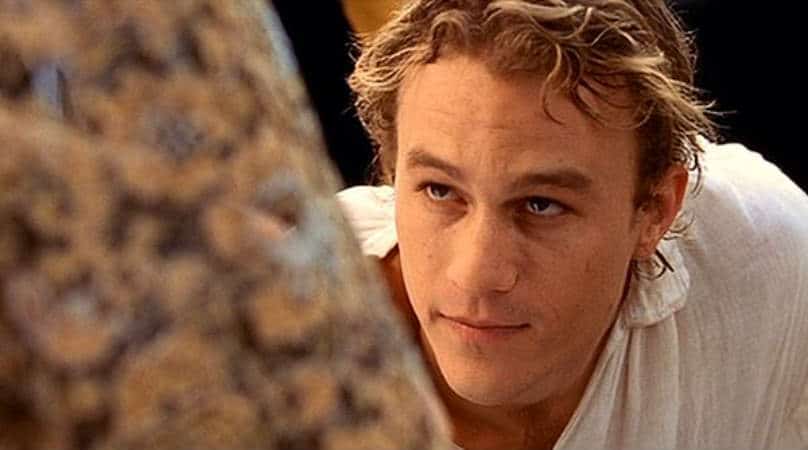 At its most basic, this film has all it needs to be a successful period drama. The Georgian costuming is absolutely gorgeous as is the entire guise the film affects. From the filming locations to the sets, everything looks authentic to the period or at least what I imagine it to be. The opulence and elegance is a kind of enigma that helps to sell the story while also holding sway over the viewer (it’s easy to feel like you’re walking through these streets or traveling the canals). But then this really shouldn’t surprise me considering it’s directed by Lasse Hallström, who is the genius behind the unique film Chocolat, or the sweet romantic drama Safe Haven and Helen Mirren’s The One-Hundred Foot Journey. Add these facts to the A-list stars (in addition to Ledger and his leading ladies, Jeremy Irons, Oliver Platt, Charlie Cox and Lena Olin also star), and this is definitely a fun flick to enjoy on a lazy Saturday afternoon.

If you can get past the first ten minutes (which is where most of the R-rated content goes down), Casanova is lovely in unexpected ways and places. Yes, the principle plot is skewed as it hands us a leading male without the benefit of having a moral compass, but the transformation of its titular character is worth every second. I love how he loved Francesca. I loved how charming he was (even if we knew how he used those charms most of the time). Because of this, there is an unexpected sense of romanticism that is sure to enchant those of us who are romantics. I think the best message is the lesson that true love is anything but physical. Casanova truly felt something for Francesca because he got to know her as a person. His pursuit of her wasn’t based on her beauty or a relationship of the physical kind. In that way, this is a period drama that shines.

If you like the cast or enjoy revisiting Heath Ledger’s short but illustrious career, Casanova is definitely a film worth renting. It’s got a frenzied albeit really fun ending, not to mention a fabulous sense of tongue in cheek humor and, of course, one cannot forget the splendid and romantic way the film ends. All I’ll say is it involves a kiss… in the rain.

Have you seen Casanova? Sound off down below with your thoughts.

CONTENT NOTE: This film is rated R for one brief but descriptive sex scene, lots of implied sexual encounters (bare legs or a scene involving a man in bed with prostitutes) and some coy sexual comments.

Casanova is available to own on DVD (for a reasonable price) via Amazon and to stream through Amazon’s Instant video service.

Our romance-themed entertainment site is on a mission to help you find the best period dramas, romance movies, TV shows, and books. Other topics include Jane Austen, Classic Hollywood, TV Couples, Fairy Tales, Romantic Living, Romanticism, and more. We’re damsels not in distress fighting for the all-new optimistic Romantic Revolution. Join us and subscribe. For more information, see our About, Old-Fashioned Romance 101, Modern Romanticism 101, and Romantic Living 101.
Pin this article to read later! And make sure to follow us on Pinterest.
By Rissi JC on November 6th, 2015