Many years ago, my aunt recommended the English translation of The Adventures of Captain Alatriste by Arturo Perez-Reverte. The first installment hooked me immediately. It did not take me long to make it through the entire series.  I adored Reverte’s world and meeting this “Spanish Musketeer.” Fast forward to last month when I discovered a television series based on Reverte’s novels. Super excited, I settled in to see how the majestic beauty of the books translated to the small screen.

I can’t say I was blown away. But, neither was I disappointed. The Adventures of Captain Alatriste was okay. It’s easy to watch. The series is set towards the end of the Spanish Golden Age. I must give the production crew credit for their sets. They captured the 17th Century wonderfully. Further, the series capitalized on the art and literature of the time. In fact, there are a number of references to authors and artists of the time. For example, in one scene, the artist Diego Velasquez is seen painting the Spanish Princess. As a result, there’s an air of authenticity to the story. 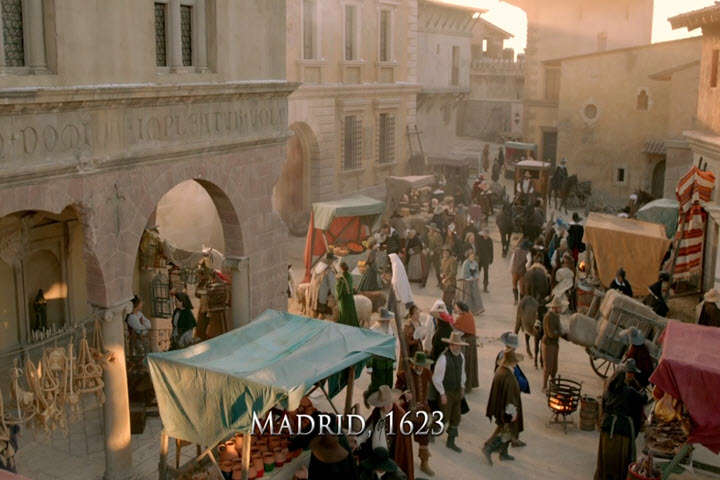 There was potential for The Adventures of Captain Alatriste to be amazing. However, it suffered in characterization and plot. So much is going on, it’s easy to lose track of who did what, when, where, and why. Then, there was the “cheese factor.” Often, the characters were over-the-top. It made them appear immature. To be fair, not all the characters were overly dramatic. In fact, the most important characters were, more often than not, spot on. Aitor Luna stars as the titular character, Captain Diego Alatriste. I thought he was fantastic. Luna brings the perfect amount of arrogance tempered by a surprising humility. Alatriste’s loyalty to the crown is without question. Although, many try to cast suspicion on Alatriste without much success. Above all, it is Alatriste’s honesty that makes him so compelling. No one ever doubts where they stand with Alatriste.

Final Thoughts on The Adventures of Captain Alatriste

Overall, The Adventures of Captain Alatriste was a solid adaptation. It tackles a number of storylines and ties them together across 18 episodes. From the Spanish Inquisition to personal love lives, The Adventures of Captain Alatriste is worth watching. Perhaps not to binge, but definitely worth a peek. Oh, and before you ask….No, it’s absolutely nothing like the books. The books are far better!

Where to Watch: Amazon Prime

Content Warning: 16 and up for nudity and other adult situations.

Have you seen The Adventures of Captain Alatriste? What are your favorite foreign language period dramas?

Our romance-themed entertainment site is on a mission to help you find the best period dramas, romance movies, TV shows, and books. Other topics include Jane Austen, Classic Hollywood, TV Couples, Fairy Tales, Romantic Living, Romanticism, and more. We’re damsels not in distress fighting for the all-new optimistic Romantic Revolution. Join us and subscribe. For more information, see our About, Old-Fashioned Romance 101, Modern Romanticism 101, and Romantic Living 101.
Pin this article to read later! And make sure to follow us on Pinterest.
By Catherine on April 19th, 2019