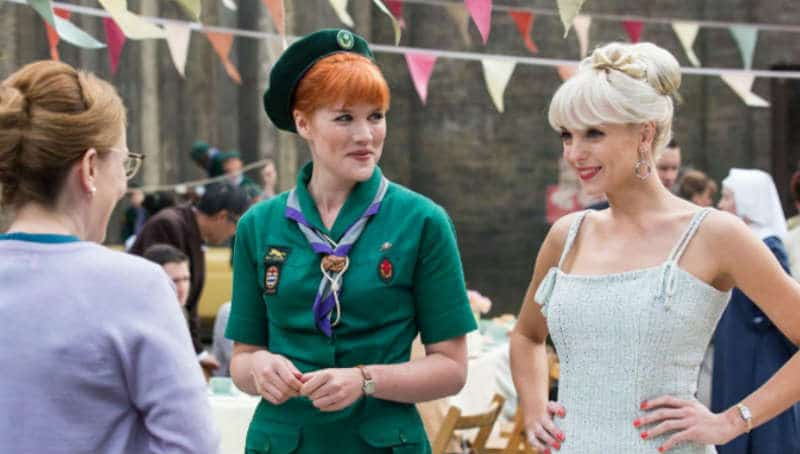 Sunday’s episode of Call the Midwife was an interesting mix of storytelling. The way it joins each of its varying moving pieces was beyond brilliant. The unexpected quiet moments of poignancy mingled with one sweet scene of the blossoming romance stealing our hearts. If there is one thing each of the installments of this season (at least up until episode five) is consistent in, it’s breaking our hearts and leaving us with a small pile of dampened Kleenex.

Now that Tom and Barbara’s friendship is discovered, Tom, coupled with Barbara, has cleared the air with Trixie. With a clean slate ahead, they’re free to pursue a courtship. This leads to dinners and nights out at the pictures. As they walk home from their night out, hands together, swinging between them, they talk of the picture and seeing it again. Then, out of his coat pocket, Tom pulls out a piece of Barbara’s favorite sweet treat.

Just as they lean in, about to kiss, a woman runs into the dark street asking for help…

Danger on the Streets of Poplar

Lizzie is a working girl who Barbara takes back to Tom’s parish cottage to clean her wounds. As she tends to her care, Barbara finds an odd injury on her neck that resembles a bite mark. Unfortunately, because of her profession and her children, Lizzie refuses to speak with the police. 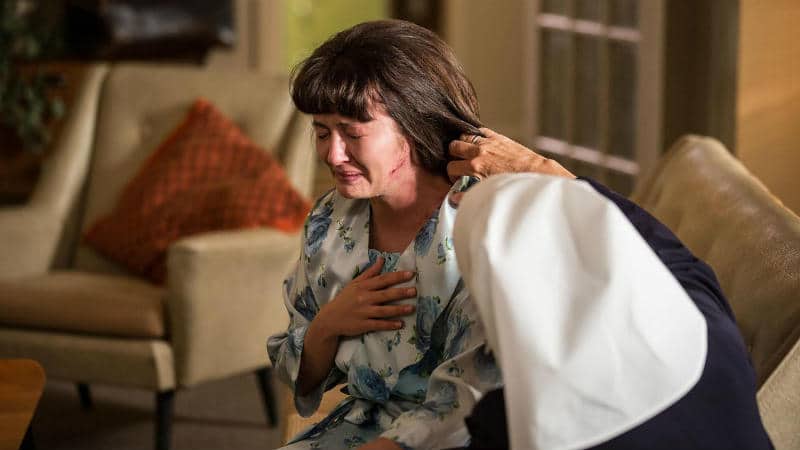 As time passes another woman is attacked on the darkened streets. This time, it’s a new mother who, under Sister Julienne’s advice (to soothe her baby who cries all night), takes her baby for a walk. Suspecting the young woman’s husband at first, Sister Julienne eventually learns what she can, but they still don’t have a witness to make a statement to Constable Noakes. Without a suspect or evidence, the terror strikes again. This time, the danger strikes much closer to home. 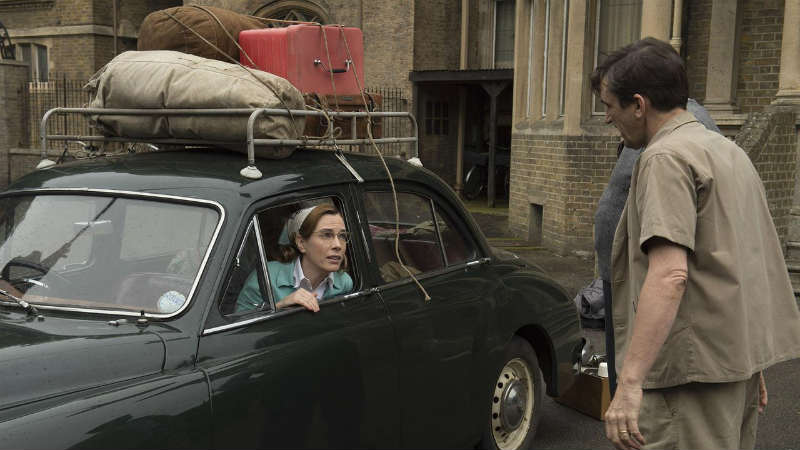 Happier times are found in the Turner household when Shelagh with Timothy, readies for a camping trip. With all of the work and strain Dr. Turner has been under, the family is anxious for some quality family time. Camping equipment is dusted off, Dr. Turner takes a week off and the car is packed. As the nurses watch the family prepare to leave, the girls giggle seeing Dr. Turner in, of all things, a pair of shorts! (With legs like his, shorts should be banned.)

Their trip is anything but good with a driving rain dampening their experience of becoming closer to nature. (By the time the episode ends, the family does take a second vacation in a hotel without the hindrance of nature.) In the meantime, work heavily weighs on his mind as they try to enjoy their time away. Dr. Turner makes a phone call in which he learns of a case at home with potential consequences.

Though the nurses of Nonnatus House delivered three of four Poplar mother’s children, she has chosen to seek care elsewhere for her fifth. Naturally, this is a curiosity to Trixie. Turns out, the mother is simply feigning a pregnancy to protect the virtue of her teenage daughter. As her due date arrives, Thora prepares to deliver her daughter’s baby without the help of a midwife.

Post birth, complications arise. Leaving to find help, Thora calls Nonnatus House asking to speak with Trixie only to get the doctor temporarily taking take of Dr. Turner’s patients in his absence. The advice he carelessly gives out makes things worse. Trixie learns of the phone call and with Sister Mary Cynthia, the women send Diane to the hospital in time to save her. Trixie follows the ambulance to the hospital as Sister Mary Cynthia remains behind to clean the house. 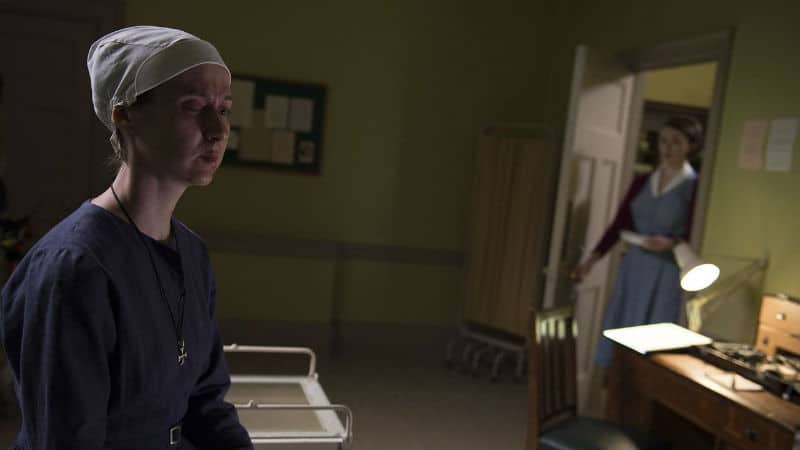 On her way home, cycling back to Nonnatus House, Sister Mary Cynthia is attacked by the Poplar miscreant. Struggling already in her quest to abstain from any talent that draws attention, Sister Mary Cynthia felt safe, believing her habit a shield of protection. Brutalized, the Sister is mortified by the attack and somehow finds herself to blame. She wants no one to help her and refuses to file a report. Then, tenderly, Sister Monica Joan cares for her Sister and in her wisdom, she unknowingly convinces her to report her injuries.

I cannot tell you how lovely it was to see Constable Noakes again. True, it comes about at the cost of a visceral and horrible event, but seeing his friendly face fill our TV screens was wonderful. Now if only we didn’t have to wait until series six to see our favorite midwife, Chummy, again!

It was also nice to see Sister Mary Cynthia enjoy a story arc. She hasn’t been the focus since she was still a midwife (and went by Cynthia). The abuse she suffered is unthinkable and her story emotional because of it, but I liked seeing her come into her own through this tragedy and find her strength.

Following in the same footsteps as an earlier theme of the season, Trixie comes clean (to Patsy and Delia, and presumably the rest of the household) about her AA classes. It’s a kind of “freeing” event for her that is, hopefully, yet another step towards a healthier future for her.

Next week’s preview: the sneak peek for next week introduces what is sure to be a controversial topic inside Nonnatus House: the contraceptive pill. There’s also some room for comedy amidst the disagreement, and the return of a familiar face. What do you suppose is yet to come for the nurses of Nonnatus House?

I’d like to see if Barbara and Tom are going to become a more permanent pairing, especially since TV shows aren’t known for giving pairings a happy ending. Instead, they like to toy with our emotions.

What do you like best about series five of Call the Midwife? Do you have any favorite characters, themes or stories? Comment down below with your thoughts!

Our romance-themed entertainment site is on a mission to help you find the best period dramas, romance movies, TV shows, and books. Other topics include Jane Austen, Classic Hollywood, TV Couples, Fairy Tales, Romantic Living, Romanticism, and more. We’re damsels not in distress fighting for the all-new optimistic Romantic Revolution. Join us and subscribe. For more information, see our About, Old-Fashioned Romance 101, Modern Romanticism 101, and Romantic Living 101.
Pin this article to read later! And make sure to follow us on Pinterest.
By Rissi JC on May 9th, 2016