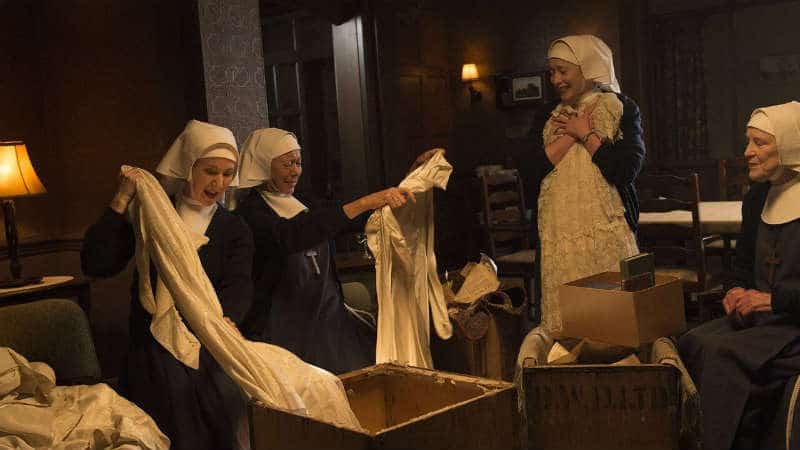 Everything that has happened during Call the Midwife’s fifth season all led up to this, last night’s season finale. Though many a tear is sure to be shed, everything comes full circle. The parallels were beautiful though the beauty comes at a cost when writer, Heidi Thomas (and the actress) asked us to bid farewell to a fan favorite character.

RELATED | Call the Midwife, Season Five: Episode Seven Recap – After the Storm Plus a Romantic Moment

Understandably given what comes in the latter part of the episode, Barbara and Tom’s relationship is placed on the back burner. But we do see a cute scene between them that involves fleas, talk of the cinema and a kiss. Needless to say, I’ve grown fond of this budding romance and hope to see it continue in the (already renewed) sixth season. They really seem to suit one another, plus given that Tom has already had a significant break up on this show, rehashing that particular story wouldn’t be ideal.

A New Beginning and The End of a Journey

Violet’s cousin, Tessie, is busy with preparations for a wedding. Her son, Mitchell is about to be married. But unlike the ideal manner his mother would have preferred, her would-be daughter-in-law is expecting. Unable to hide it, the young Australian, Noelle, is too far along to pass anything off. Nearing her due date, a quick wedding is put together with great efficiency. Though Noelle understands the need for his, she’s also underwhelmed by all she’s had to give up (including lack of a white dress) because of these choices. 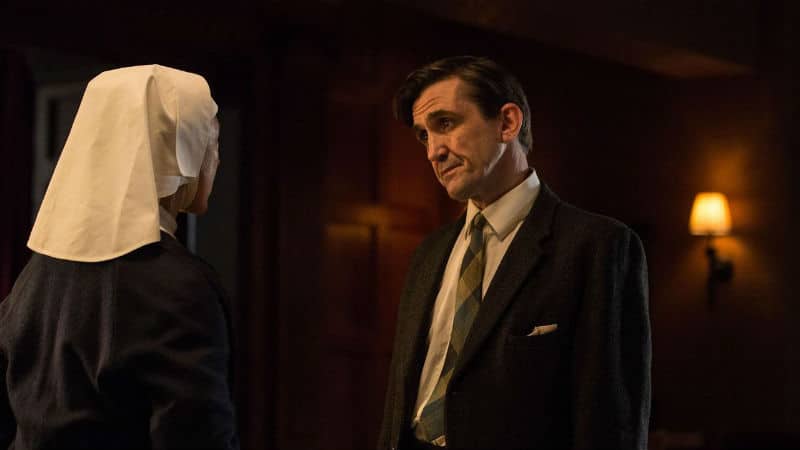 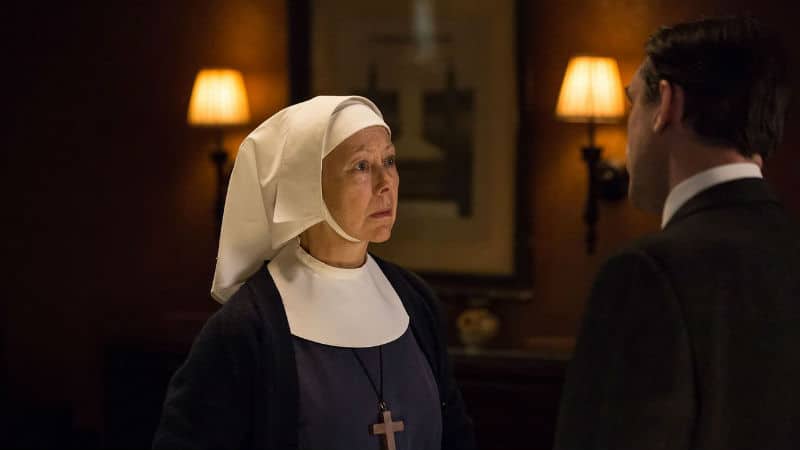 Meanwhile, at Nonnatus House, Sister Evangelina is as cranky as ever. She’s snapping at her co-workers and back to griping about the smallest things. Energized to be back to nursing, the one thing Sister Evangelina won’t assist with are births. Somehow, Barbara convinces her to accompany her to her latest patient’s home where, surprisingly, Sister Evangelina discovers she is still able to help in some small ways. The joy of helping to bring new life into the world is not a memory lost on the midwife. She’s exhausted by night’s end, but happy. Alas, as she falls asleep beside the fire, there she remains. The following morning, Fred discovers her still prone in the chair. She slipped away quietly in her sleep. Dr. Turner’s best guess being she suffered another stroke. 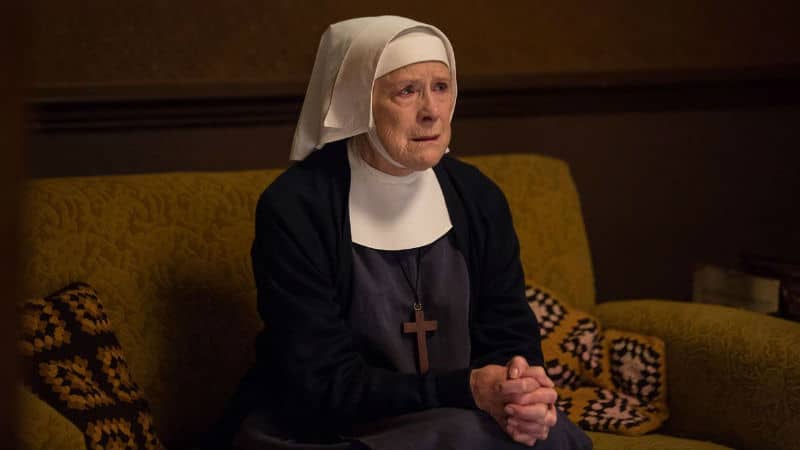 Though they’re deeply saddened by the loss of their sister, the women of Nonnatus set about honoring Evangelina. One of the ways they do this is by offering young Noelle Evangelina’s gown, the white dress she wore to take her vows. Just after they’ve said their I Dos, Noelle goes into labor. As Sister Evangelina departed this world, Noelle and Mitchell begin their new life with great promise. 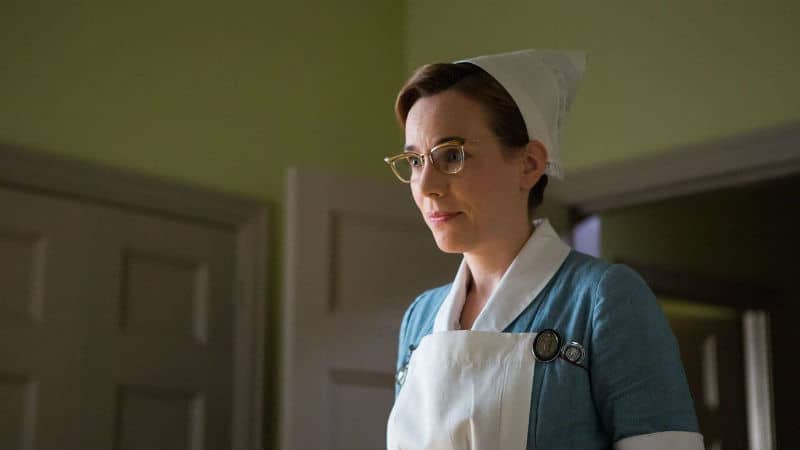 In an equally grave turn of events, Dr. Turner finally finds answers about the deformities plaguing new babies. This brings back Rhoda (who’s still struggling to cope with raising her daughter) and Ruby Cottingham (struggling with the death of her daughter). Patrick (Dr. Turner) learns that a drug, Thalidomide, might be the cause of the birth defects. This sends Patrick into a state of worry and anxiety (he begins to smoke again) all while Shelagh tries to help the process. As they search through medical file after medical file (to find the patients prescribed the medication), they must undertake the burdensome task of informing their patients.

As the fifth season draws to a close, the women of Nonnatus House and people of Poplar say goodbye to their beloved Sister Evangelina. A driving force in the community, Sister Evangelina is remembered fondly by many who show up, lining the streets of her funeral procession, to pay their respects.

Sad as it is to see Sister Evangelina gone from our Sunday night installments of Call the Midwife, this was the choice of actress Pam Ferris who felt ready to leave the show. Her death was handled with dignity and some happiness (in how she was honored) did stem from it. Also, I was pleased to experience some sense of resolution for Dr. Turner and his search for answers regarding the birth deformities. Other storylines from last night involved Patsy and Delia standing up to Delia’s mother. It would seem Patsy is planning on whisking Delia away to Paris, and Delia has notions of training as a midwife.

Trixie is also ready to accept her future. She tells Nurse Crane that she doesn’t envy what Tom and Barbara have. Now when she looks at them, she only sees what they have not what she might have had. She’s ready to find joy again and insists, that doesn’t have to involve a man. But as Nurse Crane so wisely advises, Trixie isn’t one to settle for spinsterhood. I believe she’s right. It’s been lovely to see Trixie heal this season and become emotionally healthy because she needed this time to grow as an individual. I suspect series six will match her with someone. At this point, that is all speculation!

What we do know going into next year’s sixth season (the Christmas special will air Christmas 2016) is the following. The midwives make a journey to Africa (what consequences could potentially stem from this?) and fan favorite Chummy is returning.

What did you think of the series five finale of Call the Midwife? Do you have any opinions or speculation about what’s to come? Sound off below with any and all thoughts. I’d love to read them.

Read our first season review of Call the Midwife. Catch up on series five with our earlier recaps, and browse through our other TV Recaps.

Our romance-themed entertainment site is on a mission to help you find the best period dramas, romance movies, TV shows, and books. Other topics include Jane Austen, Classic Hollywood, TV Couples, Fairy Tales, Romantic Living, Romanticism, and more. We’re damsels not in distress fighting for the all-new optimistic Romantic Revolution. Join us and subscribe. For more information, see our About, Old-Fashioned Romance 101, Modern Romanticism 101, and Romantic Living 101.
Pin this article to read later! And make sure to follow us on Pinterest.
By Rissi JC on May 23rd, 2016