Ah, a Sunday off dedicated to watching Bridget Jones’s Baby! What truer happiness can there be? When I first heard there would be a third Bridget movie, I honestly felt #blessed. (I had the same reaction with the Gilmore Girls reunion and new Anne of Green Gables adaptation – is this real?!)

RELATED | Down With Love, Maybe, But Not With Ewan McGregor’s Hotness

Bridget Jones represents everything I truly love: a hilarious and awkwardly self-aware heroine, British humor, Colin Firth being a modern Mr. Darcy, and a feel-it-in-your-toes romance.

A FEW NOTES ON THE BRILLIANCE THAT IS BRIDGET JONES

The Bridget Jones franchise is, without question, one of the best romcoms ever made. Mostly because Bridget is hilarious, relatable, and so genuine. Many times the leads in romcoms are cookie-cutter girls attempting to be funny with their clumsy or embarrassing happenings, but none truly make you feel it – or are as acutely embarrassing and hopeless -as Bridget Jones. But her success as a character comes from how she handles her epic fails. As she says to Mark Darcy in the first film, no need to make her feel like an idiot, as she “already feels like an idiot most of the time.” Bridget is a gem of a character with internal monologue that is the heart of the films. She is always trying for self-improvement and discipline but cannot always avoid the pitfalls of indulgence and makes many mistakes – something we can all identify with.

What I love the most is that her mistakes do not ruin her, ever; in fact, they make her stronger than others. She is never afraid to go on, no matter if she’s been exposed on national TV, if she’s shown up to a fancy party in a revealing costume, if she’s the only singleton at a party of couples, or if she cooks for friends and her food is disastrous. Bridget achieves true hilarity, I think, because the audience can see how disaster follows her despite her best efforts and intentions. But, we love her, as she brushes off the embarrassment with a few moans and faces and moves on. The exaggeration of her flaws in Bridget Jones, which opens with her alone, drunk, singing along to “All By Myself,” embodies the reason why she is so loved: Bridget Jones chooses to wallow, and she chooses to wallow well! 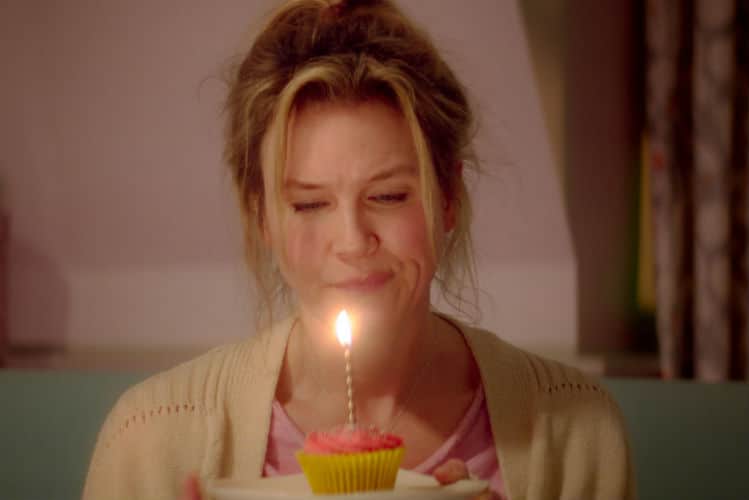 Furthermore, her love story with Mark Darcy, a character genuinely based off of Mr. Darcy/Colin Firth and, in dreams come true, played by none other than Colin Firth, is so romantic because it focuses on how he loves her despite, or perhaps because of , her embarrassing flaws and hilarious antics.

Or rather, he can see that the mortifying situations of her life are only a funny part of her and not the only part. Watching a romance between perfect and beautiful characters is often boring, but Bridget as a character and Renee Zellweger as an actress never makes it so.

ON TO THE ACTUAL REVIEW

Bridget Jones’s Baby, I thought, would be just a fan-devoted enterprise, but it ended up being cute, touching, hilarious, romantic and a nicely put in a statement about women’s rights and middle-aged women. Usually, a rom-com will have a nice statement about self-esteem or world issues or something, and this movie’s statement was also more about love and success for the middle-aged. Bridget, at 43, has split up with Mark Darcy after some years (I know! Why?! Why!?) and is alone, successful at her job, and has finally reached her ideal weight. This was a smart move by the writers, as Bridget has matured, even though she still lives in her slightly oblivious and prone-to-disaster world.

After going to a music festival with her work friend (the charming and skilled Sarah Solemani) she ends up, as she puts it, “having relations” with the very perfectly handsome and door-opening, bag-holding, mud-rescuing (they even joke about Cinderella!) Patrick Dempsey. He really rocked the silver fox look. No more than Colin Firth of course, who I love no matter what he looks like but because of the contents of his heart, but that is another matter. Bridget is very cool however and doesn’t obsess about him. As she puts it, she is a cougar, using men for her enjoyment. That, or a feckless prostitute. She was unsure.

She then proceeds to have a number of uncomfortable run-ins with Mark Darcy through family friends, and the two succumb to their past love for each other…but they’re nowhere near a happy ending just yet, as Bridget cannot jump back into a relationship that didn’t work (you’ll be relieved to know that a major reason for their breakup was his work life) even though they’re obviously MEANT TO BE.

She parts with both men and is living her life until she realizes she’s pregnant. Bridget, of course, does not know who the father of her baby is. The journey of telling both of the hot men in her life this issue is where it’s hilarity lies, but I really liked how Bridget was excited for her baby and at no moment prioritized romance over her child. There’s also some jealousy, great reactions from all the characters, and of course, delight in watching Bridget plot and plan about how to break the news.

The acting cast in Bridget Jones’s Baby was superb. Colin Firth is the true embodiment of the scowling, dour man “reserved with the tenderest of tender hearts” character. This is my favorite character, perhaps because when you see the depths of their emotions hidden behind their severe faces you almost melt from the fire of their emotions!!!

I need not say much on Renee Zellweger other than that she is divine and Bridget is divine. Her parents and friends from previous movies all added to the nostalgic feeling of the movie…it was heartwarming to see them all together again.

I thought the writers of Bridget Jones’s Baby must have had the most fun time toying with Mark Darcy’s character. Colin Firth is put in a number of embarrassing situations during which he must either close his eyes, exit the room, or make incredibly awkward faces.

His consistent sweetness, however, is displayed shamelessly through some noble acts and knight-in-shining-armor moments. And reader, I will TAKE IT, despite all cheesiness, because the world needs to know that Mark Darcy will be there for you in the end even if it doesn’t happen in real life. The idea of this Darcy who will continually be there for you and love you as you are quietly for years….it needs to always exist in this world. The soundtrack of Bridget Jones’s Baby was excellent and the romantic comedy very on point, especially with little moments of awkwardness between the male leads. The plot was just right, and the romance balanced by Bridget’s amusing work life. I did miss Hugh Grant, but I wonder what place his character would have in the movie other than to create havoc that Bridget is way above now.

RELATED | The 100 Best Romantic Comedies of All Time (Part One)

The movie did have a funny tribute to him in it. Emma Thompson as her gynecologist was sharp and terribly funny – some of the best moments were with her in them. It was also touching to see Bridget, Jack, and Mark work their way through the complicated relationships they were now in to put the baby over everything. Seeing Mark’s reaction to being a possible father and his nervous perusal of baby books was perhaps a moment of true joy. Though no one, it seems, can get to Mark Darcy like Daniel Cleaver, Patrick Dempsey held his own as a rival to Bridget’s heart. The movie was, in every moment, enjoyable, nostalgic, and provided a range of laughs.

Content Note: Bridget Jones’s Baby is rated R for some sex scenes, brief nudity, and language, but overall a heartwarming romance!! However, enter the film with caution.

Do you know any heroines better than Bridget Jones? What did you think of Bridget Jones’s Baby? Chime in below!

Our romance-themed entertainment site is on a mission to help you find the best period dramas, romance movies, TV shows, and books. Other topics include Jane Austen, Classic Hollywood, TV Couples, Fairy Tales, Romantic Living, Romanticism, and more. We’re damsels not in distress fighting for the all-new optimistic Romantic Revolution. Join us and subscribe. For more information, see our About, Old-Fashioned Romance 101, Modern Romanticism 101, and Romantic Living 101.
Pin this article to read later! And make sure to follow us on Pinterest.
By Amirah Yasin on October 5th, 2016

1 thought on “Bridget Jones’s Baby: A Riotous Reminiscence of Romance”