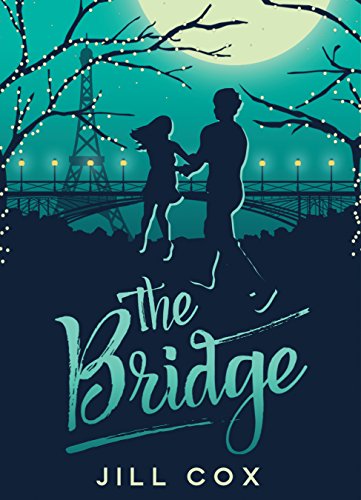 In The Bridge, when Meredith Sullivan wins the Beckett Scholarship and is finally able to fulfill her dream of studying in Paris, she is thrilled. But she is less thrilled, however, to discover her class nemesis Pete Russell has also won a place and will be around to torment her all year. Not to mention, she is also sad to leave behind her best friend and secret crush Drew Sutton.

Pete is not content with their status quo. He quickly begins to challenge Meredith’s perceptions of him as they discover Paris together. Slowly Sully (as Pete calls her) realizes she may have misjudged this guy who shares her love for the City of Light.

But just as she begins to consider something more than friendship, Drew finally confesses his feelings for her. Now she is torn between the man she always wanted and the one who seems to understand her better than anyone else.

When I read the premise of The Bridge and saw that it was set in Paris, I knew I had to read it. The author’s love for the city and all things French really shines through. It is one of the highlights of this tale. Fellow Francophiles like myself will love transporting to the streets and events of Paris. Author Jill Cox is obviously knowledgeable of both and weaves them into the story in such a natural way.

One would also never guess that The Bridge is the author’s debut novel. Although this Young Adult book features some of the typical tropes and themes, including a love triangle, these things resolve in an atypical way. I appreciate the utter lack of teen angst as the heroine Meredith is not only smart and motivated but extremely well-adjusted. She has a stable home life with loving parents and shares a special closeness with her older brother. Truly the only angst that appears is provided by her friend Drew Sutton when he doesn’t get his way.

Pete Russell is totally swoon-worthy and an unexpected hero for both Meredith and the reader. His true character is revealed slowly as he shares his tragic past with Sully/Meredith. His vulnerability and patience with her misunderstanding about him is fairly unique for a young male. Yet, Pete is also witty, quick with quips and ideas, an interesting blend of bravado and quiet endurance. This blend ensures that you just want to scoop him up for a long hug.

RELATED YA Review: Wanderlost – A Whirlwind Tour of Past, Present, and Future

One of the themes which Cox highlights in The Bridge is how first impressions and judgments can be wrong. It’s an unfortunate fact of life, but as my mother told me, “you never get a second chance to make a good first impression.” Meredith begins the story believing Pete to be an insensitive antagonist. Unfortunately, she bases her entire belief of his character on their first meeting. But as both she and the reader discover, she has totally misjudged who Pete is. She is forced to revise her opinions of him when he shares their first encounter from his own perspective. In some ways, Meredith’s experiences with Pete echo those of Elizabeth Bennett with Mr. Darcy.

While this novel is full of wit, charm and the magic of Paris, it also explores more sensitive topics. Pete’s past is a traumatic one and his present also holds a bit of tragedy. This never weighs down the story but gives the author the opportunity to show the generous, mature and compassionate natures of both Pete and Meredith. I also really love how the author reveals the importance of the book’s title both figuratively and literally towards the end.

I was absolutely charmed by The Bridge for many reasons, not to mention impressed that this was the author’s debut. While it explores common tropes and themes, it never veers into cliché or predictable territory. I understand that the author is planning a sequel. I am eagerly anticipating the next chapter of Meredith, Pete and Drew’s story.

While I feel this story would be a good fit for the younger audience of the Hallmark Channel, I would love to see what a larger budget would make of it for the big screen. This would allow for some beautiful cinematography set in Paris, which is really like a supporting character in The Bridge. Meredith mentions that Pete reminds her of Chris Pratt, but the actor himself is probably too old to play this role. I could see Logan Lerman as Pete and a red headed Jane Levy as Meredith.

Content Note: The Bridge is a clean YA/NA romance with no objectionable material.

Our romance-themed entertainment site is on a mission to help you find the best period dramas, romance movies, TV shows, and books. Other topics include Jane Austen, Classic Hollywood, TV Couples, Fairy Tales, Romantic Living, Romanticism, and more. We’re damsels not in distress fighting for the all-new optimistic Romantic Revolution. Join us and subscribe. For more information, see our About, Old-Fashioned Romance 101, Modern Romanticism 101, and Romantic Living 101.
Pin this article to read later! And make sure to follow us on Pinterest.
By Brittaney B. on August 14th, 2017