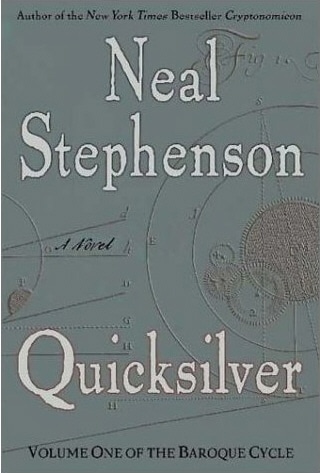 “Three main characters bear witness to the dawn of the Modern Era in Europe, including a scholar of the Royal Society, a swashbuckling vagabond, and a brilliant former slave/countess/proto-stock market genius.”

The trilogy—though it may be better to take it as a single massive novel split up for the convenience of publication à la Lord of the Rings—takes place in Early Modern Europe. It primarily follows three major characters: Daniel Waterhouse, Jack Shaftoe, and Eliza  Second-Name-Subject-To-Change. I would be reluctant to term any of them the protagonists. While they often move the events of the story forwards, they each take turns as observers and prime movers.

It would be difficult to describe the plot in any detail. In a story so complex, one person’s spoiler is another person’s background information. There are the three viewpoint characters, and each has their own interweaving adventures. Waterhouse’s story is closely tied in with Isaac Newton, the founding of the Royal Society, and the birth of “Natural Philosophy,” what we call science. Simultaneously, Jack’s exploits read more like a swashbuckling pirate adventure that circles the globe and intersects organically with the adventures of Waterhouse and Eliza. Eliza’s escapades are well-crafted. Stephenson engineered her character and her share of the plot brilliantly. She is a product of her time, a plausible character. And yet, she has the strength and guile that would be expected of a modern heroine. Despite this, Eliza fits well into the story; she’s not a modern heroine shoe-horned into a historical fiction novel. She is not some old-fashion passive damsel, but not uncharacteristically rebellious either. Instead, Eliza works, at times almost subversively, within her time and place.

Stephenson made himself an expert at that particular era of history. He brilliantly incorporates things like economics, early science, shipbuilding, and a dozen other areas of expertise quite obscure to the modern reader. Paradoxically, this allows Stephenson a little leeway in terms of adding to this milieu. He knows this setting well enough to play with it and insert elements seamlessly. He uses so many historical figures as characters, it’s hard to tell who was a real person and who Stephenson invented. Even islands and entire countries, like the fictional island of Qwghlm seem plausible enough to warrant a glance at Wikipedia.

One element that people will either love or hate is the language. Stephenson is more-or-less in the camp of using modern language in his historical fiction. The Early Modern Era language-scape is roughly contemporary to Shakespeare, a version of our language that the modern reader could comprehend, albeit with some effort and probably a few footnotes. I largely agree with the decision to use more modern language in this case. As much as I love Shakespeare, it would further complicate an already intricate work, and undercut the forward movement and tension of the story for a modern reader. Of course, as a Neil Stephenson work, even this element does not strictly follow any rules; he occasionally uses archaic spellings in both prose and dialogue. This is sort of a best-of-both-worlds situation. The occasional “technologickal” and “phanatiques” give the story a degree of authenticity, but when a character belts out a solid “oh fuck,” it conveys more about their mindset and character than the 17th Century equivalent.

There is love between some of the characters, but I wouldn’t consider it romantic in terms of genre conventions. It is not idealized like older romance stories. Of course, a romance novel would be incredibly boring if everything went smoothly. But the relationships between the characters lack any kind of magic. This isn’t a fault or disappointment; it’s just not what this book is about. This does tie in with a major aspect of Stephenson’s work; it strongly resists genre-level classification. While The Baroque Cycle is most-like historical fiction, there are elements of science fiction, fantasy, and Steampunk—with the gears but not the garishness. It’s not afraid to borrow elements of other genre, but sure as hell isn’t bound by them.

Ultimately, the thing that will decide if you like this novel is your ability to adapt to Stephenson’s writing style. Stephenson is a hardcore academic, the kind of person who thrives among archives and dissertations. The novel is incredibly information-dense, and at times tiring to read. Stephenson, like Heinlein, has no qualms about stopping the narrative to lecture. The difference is, unlike Heinlein’s ballistics seminars, when Stephenson decides it’s time to lecture, the monograph on the cost of lumber in 17th Century England always at least tangentially relates to the plot. He did his homework when he wrote this story and expects the reader to keep up. The only thing I would really call an objective fault about the novel is that he often relies on cliffhangers to engage the reader, but the pacing and information density makes it so that the reader looses the tension engendered by the cliffhanger. He often waits too long to switch back to see how the peril was resolved.

This is one of the few books that I enjoy that I would be ambivalent about seeing adapted into other media. The story is so rich in detail that it would be very unlikely that it would not lose something in the translation. Again and again, this novel reminds me of Lord of the Rings, in terms of the size and scope of it. And while Lord of the Rings worked wonderfully on the big screen, one of the major reasons it did so was that the story described things like epic battles with fantastic creatures, stunning architecture, and a vast scope. These things work well in large big-budget movies. While The Baroque Cycle has real-world equivalents of some of these elements, the novel is all about realism, and lacks that fantastical element. An extremely well-thought-out TV adaptation might actually tell the story and remain truer to the original novel than any kind of bigscreen film ever could. Granted, it would probably have to be one of those HBO-style period pieces, with a large budget and allowances for an occasional degree of violence not acceptable on network television. Even then, it would need a very skilled writer to properly bring this story to any other medium. J. Michael Straczynski would be perfect a show-runner, as he demonstrated a great handle on arch-based storytelling with his classic series Babylon 5.

Content Note: There is some sex and violence in this book and is not recommended for all readers.

Check out our Archive of Reviews from Film, Literature and Television HERE

Our romance-themed entertainment site is on a mission to help you find the best period dramas, romance movies, TV shows, and books. Other topics include Jane Austen, Classic Hollywood, TV Couples, Fairy Tales, Romantic Living, Romanticism, and more. We’re damsels not in distress fighting for the all-new optimistic Romantic Revolution. Join us and subscribe. For more information, see our About, Old-Fashioned Romance 101, Modern Romanticism 101, and Romantic Living 101.
Pin this article to read later! And make sure to follow us on Pinterest.
By Robert J. Boumis on March 25th, 2014