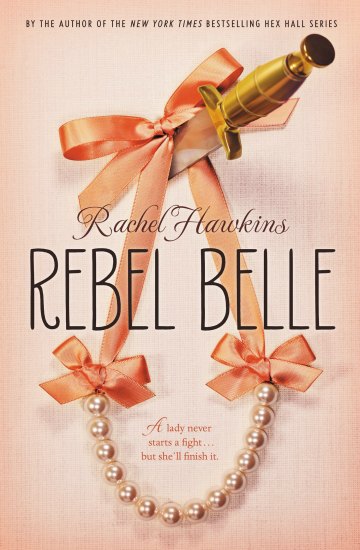 “Harper Price, peerless Southern belle, was born ready for a Homecoming tiara. But after a strange run-in at the dance imbues her with incredible abilities, Harper’s destiny takes a turn for the seriously weird. She becomes a Paladin, one of an ancient line of guardians with agility, super strength and lethal fighting instincts. Just when life can’t get any more disastrously crazy, Harper finds out who she’s charged to protect: David Stark, school reporter, subject of a mysterious prophecy and possibly Harper’s least favorite person. But things get complicated when Harper starts falling for him–and discovers that David’s own fate could very well be to destroy Earth.

With snappy banter, cotillion dresses, non-stop action and a touch of magic, this new young adult series from bestseller Rachel Hawkins is going to make y’all beg for more.”

Regardless of a story’s unique quirks, a book can typically be put into a “box” of some sort. There are usually similarities a reader can grasp with familiarity – either it incites a nostalgic feeling or is perhaps reminiscent of a favorite film. Rebel Belle didn’t read anything like that for me. There are hints of familiar concepts and storyboards, but mostly it’s a unique story in its own world of ingenuity. The story wastes no time in kicking things off in an exciting, grand fashion. It opens with two casualties and a Southern Belle given powers she didn’t ask for. Sounds exciting, right? Well… sort of.

Following the opening pages, the story fell a little flat. It seemed like things collapsed and slowed to a pace where not much happens beyond Harper trying to piece together what is going on. Understandable given what she just went through – there’d be cause for concern is she didn’t have questions – but this portion seemed to drag the story down more than need be. Given the thrill of the opening pages, I wondered what else was going to drive the story along. It’s a long time coming, but once Harper begins embracing who she is and works with the boy she’s charged to protect, David, things do begin to get… interesting again. The ancient prophecy histories and the timelines of each “group” are intriguing, though this novel doesn’t delve too deeply into that or the repercussions of the world, which I think I liked. There are four primary sects or “lines.” The Ephors, Mages, Oracles (which is David’s supposed destiny) and the Paladins, Harper’s recently acquired title.

Marketed to the YA market as a secular novel, Hawkins does use some restraint. One of Harper’s character quirks is an abhorrence of the F-word, so in its place she uses “effing.” I have to say, this joke became a tiresome “gag,” though I understand it was meant to be amusing and distinguish Harper as the genteel Southern lady. It’s funny in the beginning, but not so much as it continues on – especially with Harper’s inner monologue mentioning whether or not the person uses the actual word.

In the end, this book was funny and definitely entertaining. Book two pitches this story as a Buffy meets Veronica Mars scenario. I didn’t see the latter at all in these pages, though perhaps Buffy rings true given the story’s supernatural elements. That said, Rebel Belle opts for a supernatural vibe that’s in a world all its own. The characters grew as the story continued and I suspect book two, Miss Mayhem (in stores April 7th), will continue changing and shaping them. I did like Harper’s sassy attitude (that tagline is so cute, “A lady never starts a fight… but she’ll finish it”), and the adjustments she makes to try and take the noble path. When it all comes down to it, simply said, this book is a rebel, which is what makes it such a fun read.

Likening this to anything is tough, as I said above. I guess Harper’s world pre-Paladin could be described as a kind of Hart of Dixie vibe. But the story is also supernatural and in some ways reminded me of I Am Number Four, although the perspectives are flipped and it’s from the perspective of the protector (Harper) instead of the one who she protects (David). In all, both a film or TV show would work if ever adapted.

Our romance-themed entertainment site is on a mission to help you find the best period dramas, romance movies, TV shows, and books. Other topics include Jane Austen, Classic Hollywood, TV Couples, Fairy Tales, Romantic Living, Romanticism, and more. We’re damsels not in distress fighting for the all-new optimistic Romantic Revolution. Join us and subscribe. For more information, see our About, Old-Fashioned Romance 101, Modern Romanticism 101, and Romantic Living 101.
Pin this article to read later! And make sure to follow us on Pinterest.
By Rissi JC on March 31st, 2015