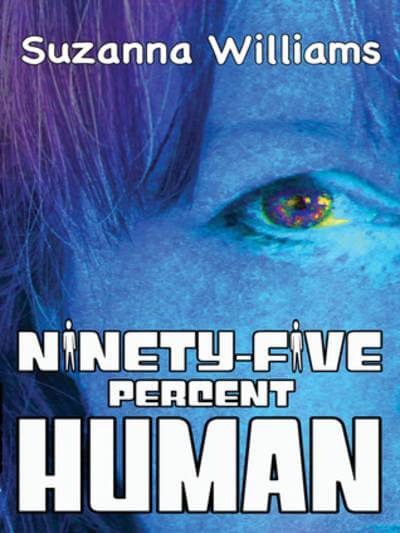 “Teenager, Joe Kendrick, thinks he’s got problems. The farm he’s looked after since his father’s suicide is failing and his brother wants to sell it, his girlfriend has dumped him and his normally down-to-earth Nan starts muttering about seeing UFO’s. And all Joe wants is to live a ‘normal’ life.

Ninety-five percent Human is the first in a two book, sci-fi adventure set amongst the Welsh mountains.”

For those who love a good old-fashioned alien romance (anyone else counting down the days to Star Crossed?), Ninety-Five Percent Human makes for a good choice of the YA variety. While not without flaws, it still succeeded in sucking me into the love story set against the beautiful backdrop of Wales. The setting actually drew me further into the tale than the romance did at first. I wanted to learn more about Joe and this adorable sounding Welsh farm that even hides a secret cave of quartz stones. When Sarah ponders how anyone could want to sell the place, I wondered the same thing, despite the clear financial hardships Joe faces with his Nan and brother.

After being thrown a loop about possibly selling the farm (in a place where everyone treats him like a pariah because his long gone mother had thought aliens were messing with the sheep), Joe comes across a girl named Sarah but it isn’t your typical meet cute. No, Sarah is trying to commit suicide by way of drowning. Admittedly, I’m not sure I loved the suicide thing as it reminds me a little of the weak minded Mirah in Daniel Deronda who similarly tries to drown herself when Daniel first meets her. I’m not a fan of Mirah because I didn’t buy the motivation behind the terrible act other than she is great at being the martyr. Likewise, I’m still not sure I believe the motivation behind Sarah’s choice (something I won’t spoil) but it did work in bringing the two characters together believably. It helped create this desperate need for Joe to help Sarah and to bring her into his home because she has nowhere else to go. Not to mention that there is this creepy guy after her and a tracking device in her arm…

As the story continues to unfold from plot point to plot point, the characters develop rather nicely. I feel like I know Joe especially well and appreciate this 3-dimensional and mature teenage boy doing what needs to get done for his family. I also liked his imperfection. When he let his guy friends ‘believe’ Sarah was his girlfriend who stays at his house, I kind of wanted to smack him for letting them believe things about Sarah that weren’t true. At least this flaw to appear macho made him feel real. Other compelling characters pop up as well that I hope gets more development for book two (this being book one of a 2 book series).

The strongest element of the story, outside of the protagonist’s characterization (I did want just a little more with the brother and Sarah), was definitely the romance. Both Sarah’s and Joe’s innocence as they slowly come together feels quite beautiful to read when you imagine them falling in love in a small Welsh town far from the big city. And as Joe comes to understand the truth behind whom Sarah truly is and how she connects to the mysterious sightings around town, the love story also becomes exciting when the action picks up midway. Sure, sometimes the novel goes from one dilemma to the next a little too quickly (which causes some villains to be a little underdeveloped and over the top) but at least I never got bored! Still, there was also some grammar issues throughout that were a little distracting. On the whole, however, if you just want to enjoy a sweet and clean star crossed type love story with some good coming of age drama, then this might be a good fit.

I feel this would work best as a TV series. Because some of the plot points feel rushed, for a show the writers would have time to develop each plot point and every character in greater depth. Not to mention that a quirky Welsh town with strange alien sightings would just be great television because of the endless possibilities of interesting characters that could be incorporated into the show. An alien/human love story would just be the cherry on top for there can never be too many of them…at least for us Roswell fans.

Our Interview with the author: Suzanna Williams takes the Petticoat Personality Test

Our romance-themed entertainment site is on a mission to help you find the best period dramas, romance movies, TV shows, and books. Other topics include Jane Austen, Classic Hollywood, TV Couples, Fairy Tales, Romantic Living, Romanticism, and more. We’re damsels not in distress fighting for the all-new optimistic Romantic Revolution. Join us and subscribe. For more information, see our About, Old-Fashioned Romance 101, Modern Romanticism 101, and Romantic Living 101.
Pin this article to read later! And make sure to follow us on Pinterest.
By Autumn Topping on January 24th, 2014