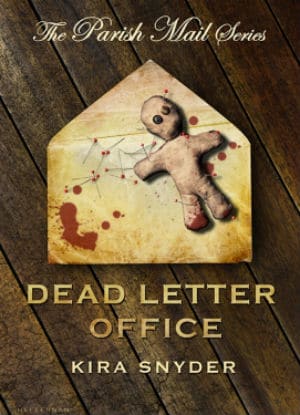 Romance, magic, mystery, supernatural suspense and true emotion, this urban YA book has it all…plus a little extra. Dead Letter Office, the first in The Parish Mail Series is part of a new wave of interactive fiction that gives you, the reader various options throughout the novel. In certain parts of the story different paths for the character are placed before you and you must decide what choice that character makes. This is actually my first interactive experience as a reader and I rather enjoyed having just a little bit of power.

Dead Letter Office begins with Celia Macarty moving to her father’s home city New Orleans after he’s been killed in Afghanistan. There with her mother she must get to know the family she never knew, especially her grandparents they are now living with. Soon after, Celia finds a mysterious letter in a mailbox addressed to her. But there’s a catch: it’s an ancient letter from more than 100 years ago. The letter contains the details of a murder that matches a present day murder. The past and present then collide in an impressive tale of paranormal intrigue.

Along the way, Celia makes new friends. There’s Tilly, a true blue witch, Donovan…the son of a local detective, Luc (who just so happens to be dead) and Sloan, a spoiled rich boy with secrets. Together, the team must solve the case. Will they figure out the mystery before it’s too late?

Sometimes you begin a book and know within the first page if you’re going to like it. Here I knew by the first sentence.

Sometimes you begin a book and know within the first page if you’re going to like it. Here I knew by the first sentence. “The dead man smiles at me.” The simple phrase sets the tone. It’s beautifully stated, while also representing the feel of the series. There’s something about Dead Letter Office that reminds me of the romantic supernatural stories I read myself as a teenager on repeat: L.J. Smith with a modern twist.

The characters presented in Dead Letter Office, especially Celia, are memorable. From the start, with the “I” perspective in full swing you feel like you know Celia fairly quickly. Yet, she never comes across as a self-absorbed or narcissistic teenager, which can often be the case with YA books. But here, Celia reads like a grief-stricken girl in search of a purpose. And she finds it. She has an investigative mind, compassion for others and a tenacity and stubbornness to get to the truth. She’s a female character I can root for. Yet, despite the maturity found in the character she is still quite clearly a teenager with teenage problems.

One of my favorite parts of the story was the relationship between Celia and her father. Even though he’s passed away, the story between them is presented in a very real, emotional way despite the fun supernatural stuff going on around it. The emotional rollercoaster Celia as a character must go through because of the loss of her father and the guilt that comes with it is surprisingly moving. The attention and tribute paid to veterans in the book was not only sincere but appreciated.

Tragedy aside, any good urban fantasy YA series has got to have some romance, right? Well Dead Letter Office doesn’t disappoint. Celia doesn’t have one romantic choice, but three! First, there’s Luc. He’s the mysterious dead guy who can only be seen at night. Charming, direct and of course intriguing because he died over a hundred years ago, he’s never boring to read. It will be interesting to see how his character develops in the series because there’s still a lot of mystery surrounding him. But he’s always good to have around when Celia needs a little bit of rescuing. Then there’s Donovan, the “living” son of a detective with an investigative bent himself. Celia and Donovan are a lot alike in that way, though their differences make them a team to watch out for. Donovan has an edge, if only because he has a heartbeat.

Last but not least is Sloan. The intentions of this character remain unknown, which captivates my interest. He’s a spoiled rich boy with a touch of attitude. Somehow I wonder if he could turn into the Logan Echolls of the story. If that occurs, then no doubt I’ll be surprisingly rooting for Sloan and Celia. At any rate, where his character is headed certainly won’t be a dull read. Celia has a lot of attractive guys to choose from. At this point, I’m not sure which one I think she should choose because I enjoy all three.

One of Snyder’s gifts as a writer is snappy dialogue and visual action. You feel like you’re watching an addicting show on Netflix and you must read on to know what happens next. Having a background in television it’s easy to see why Snyder can present a scene, create an atmosphere and write description like a pro. The visual imagery is so vivid you feel like you’re in New Orleans experiencing the adventure with Celia. The first person narrative in present tense also keeps the pulse of the story moving. And sometimes you have a little bit of say on what happens.

The interactive part of the adventure intrigues me because I can always go back and read the story with a different result. For someone who enjoys rewriting the endings of stories I don’t like, I find this to be a particularly fabulous concept! (There’s a part of me hoping for an interactive version of Little Women, you know where Laurie and Jo end up together instead). Perhaps too many choices will be frustrating for the indecisive person, but each time a new choice popped up I ate it right up. Besides, I can always go back and read the other choice later; kind of like entering an alternate reality or a parallel world. Close but not exactly the same.

Overall, the interactive nature, good writing, and well-developed overarching stories mixed with a case for Celia to solve with her Scooby Gang makes it a fun read and a well-written one at that. That said, while the procedural case of the book was interesting, it was perhaps a tad too straightforward. A few more twists and turns in relation to the case would make what already is a fantastic series even better. Nevertheless, curiosity reigns supreme in Snyder’s book both for Celia as a character and for the readers who get to see what happens next once they make their choice. I can’t wait to see what happens next in the second installment of The Parish Mail Series!

Dead Letter Office – or The Parish Mail Series if you will, is without a doubt meant to be a TV Series (the TV like style was intentional). Without giving too much away about the ending of the book, it perfectly creates a premise that would work on television. The CW and The Parish Mail Series would be a match made in heaven. With a strong urban procedural hook, the investigative Celia, the best friend Tilly who also happens to be a witch, and a believable love triangle…no…quadrangle with three equally intriguing romantic leads you can’t go wrong. It would be Veronica Mars meets The Dresden Files with a teenage Moonlight vibe. And since Kira Snyder also works as a TV Writer (Moonlight, Eureka, Alphas, The 100) we know who could run the show! Anyway, it’s a show I definitely would watch. I think it would make a great companion to The Originals (another supernatural show, though very different, that also takes place in New Orleans).

Stay tuned for future reviews on the Parish Mail Series as well as upcoming interviews!

Our romance-themed entertainment site is on a mission to help you find the best period dramas, romance movies, TV shows, and books. Other topics include Jane Austen, Classic Hollywood, TV Couples, Fairy Tales, Romantic Living, Romanticism, and more. We’re damsels not in distress fighting for the all-new optimistic Romantic Revolution. Join us and subscribe. For more information, see our About, Old-Fashioned Romance 101, Modern Romanticism 101, and Romantic Living 101.
Pin this article to read later! And make sure to follow us on Pinterest.
By Amber Topping on October 7th, 2013