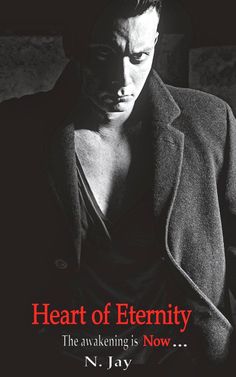 Heart of Eternity, by Nida Jay, follows the journey of Naida and Jay and their eventual meeting that turns out to be a product of fate.

First we meet Naida. Naida has a cancerous tumor in her stomach, and is refusing medical treatment, which was advised by her father. Naida decides to live with her uncle, Zachriel, who we learn is the black sheep of the family. Zachriel decided to delve into his spirituality and lead his life as a missionary and soon settled down in the woodland areas of Blackheath, Australia. Naida looks up to her uncle’s way of living and wants to experience this.

Once we learn that Naida is going to refuse medical treatment, she goes to live with Uncle Zachriel so he can teach her how to heal her tumor with spirituality. Zachriel has an ethereal quality about him. Most of his dialogue consists of small anecdotes that seem a bit like gibberish. His first sentence to Naida isn’t even a greeting. This makes Zachriel seem very focused on the idea of spiritual healing. I can understand why Jay wanted to do this. She wants the audience to believe that he is as spiritual as possible and that his cure for cancer is an exact practice. Naida knows that if she listens to Zachriel and follows a strict regimen, then she will be able to heal herself.

As we learn the story of Naida, we are simultaneously learning the story of Jay (in mostly flip flopping chapters). Jay is a rough and tough kind of guy. He is an adrenaline junkie and a fighter. He was born in Russia and we learn that he had a bad breakup and has a dark past concerning his father. This leads to an ominous presence always in his life, which we see is very similar to the one that Naida is seeing in her “dreams.” We soon realize that the similarities between both of their dark beings is more than a coincidence.

Naida and Jay have a strong connection that they don’t know about until they meet. This connection is prudent in Jay conquering his darkness and Naida coming full circle with her spiritual healing. Jay does a great job at keeping the suspense, going through a couple of chapters before the two meet and before we find out what the dark presence actually is.

I had a hard time believing the relationship between Jay and Naida. Were they lovers? Spiritual friends? Or did they just have a strong connection? I think they were supposed to be lovers by the fact that they did kiss, but it was hard to believe without any real dialogue between the two. Plus, I think most love stories end with some sort of happy ending or some sort of resolution (not necessarily happy) to prove that they really were in love. Instead, without giving too much away, in the end we get a sort of uncomfortable vibe that leaves us wanting more.

The naming of the characters is also a little distracting. Naida and Jay. All I could think was “Well she didn’t really delve into character naming when she was writing the story.” Character naming is something, I think, very important to the story and can reveal much more than what is written.

From the beginning I was turned off by Jay. He is a violent, abusive, and not exactly someone I would swoon after with his sadistic ways.

The ending didn’t really do it for me. It all seemed a little rushed at the end.

All in all I did have a good time reading this story and I wanted to see what would happen to the characters. I think this story would greatly improve if more chapters were added and the love story between Jay and Nida was developed more.

I think this book would be great for anyone looking for a love story centered around spirituality.

CONTENT NOTE: There is some graphic material in the book so read with caution.

Check out some of our past reviews here

Our romance-themed entertainment site is on a mission to help you find the best period dramas, romance movies, TV shows, and books. Other topics include Jane Austen, Classic Hollywood, TV Couples, Fairy Tales, Romantic Living, Romanticism, and more. We’re damsels not in distress fighting for the all-new optimistic Romantic Revolution. Join us and subscribe. For more information, see our About, Old-Fashioned Romance 101, Modern Romanticism 101, and Romantic Living 101.
Pin this article to read later! And make sure to follow us on Pinterest.
By Sarah Webb on September 2nd, 2014