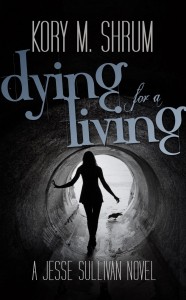 We have Jesse, a seemingly normal woman dealing with life’s trials such as a complicated love life, a demanding job, and one more thing…being a Necronite, the PC term for zombie. You see, Jesse is part of the 2% of the population with the special ability to absorb other people’s deaths. That demanding job, well it’s as a death replacement agent. Jesse dies in the place of certain well paying clients so that they can continue leading a happy life. And Jesse is simply able to wake up again, good as new, with just a few stiff muscles and some soreness as a consequence. Sounds like a pretty good deal, right. Wrong. Not everyone likes the idea of people who can die and then come back to life. Necronites aren’t exactly popular members of society. And now someone has decided it’s time to kill them all off for good. This is where our adventures with Jesse Sullivan begin, as we follow her on a wild journey trying to find out who these killers are while making sure Jesse isn’t the next one to receive a permanent death sentence.

First of all, I loved the main character! Jesse if far from perfect and she doesn’t give a damn about what other think about her. She’s a bit prickly around the edges and a smart ass, with a troubled past and a very complicated present. For all that, she is also funny, more loyal than she gives herself credit for, and performs pretty good under pressure. What I loved about Jesse is that she is someone you can relate to (apart from the whole Necronite aspect) and empathize with. She is a real person with real problems, supernatural part aside, which is more than I can say about a lot of the heroines in fiction nowadays. Her imperfection is what makes her the perfect heroine.

I’m also crazy about Kory M. Shrum’s innovative take on zombies. She’s taken a supernatural character that is usually relegated to horror movies and being cannon fodder in supernatural battles and elevated it to a whole new level. Kory has leveled the playing field for these supernatural characters. They are no longer stuck in the background while the vampires and werewolves take all the glory. Kory’s Necronites are fully fleshed out characters, who are just as sexy and intriguing as the other popular supernatural beings in literature, tv, and film these days. I was very impressed with the explanation behind their existence. Kory creates a scientific explanation for the existence of zombies that also allows them to still function as normal people rather than mindless creatures focused solely on eating human flesh. Kory has done something with this novel that I have certainly never seen before. I’d watch out. I’d bet this is going to start a trend of sexy zombies in television and literature. They’re going to be the next big thing.

Aside from the uniqueness of the premise from this story, the plot was also expertly constructed. The story moves along seamlessly, going from one action scene to the next with interesting dialogue and intrigue to break it up. I found myself pulled in and reading well into the night because I simply couldn’t put it down. The romantic side of Jesse’s life is just as exciting and fraught with tension and craziness as the death plot she is trying to uncover. Caught between her past and current lovers, both whom she cares deeply for, things are rocky to say the least. But I enjoyed her interactions with both, and am still trying to pick a side. Thankfully it looks like a sequel is in order, so I have more time to figure that out. I will admit that I generally like a little more romance than Dying For a Living contained, but it was definitely there. Needless to say, I would definitely recommend giving this book a try. You won’t regret it, and will probably lose sleep because you won’t be able to put it down.

I can see this being an excellent TV series. The whole idea of the death replacement agency would translate really well into the serial format, while the overarching plot would add build up and excitement each week. Besides, we’ve gotten vampires and werewolves all over the place. I think it’s time the zombies stepped out into the light and had their share of fame (and I don’t mean the kind that they get from shows like The Walking Dead).

Content Note: There is some sex and violence in the book though not continuous throughout. However, read with caution.

On the morning before her 67th death, it is business as usual for Jesse Sullivan: meet with the mortician, counsel soon-to-be-dead clients, and have coffee while reading the latest regeneration theory. Jesse dies for a living, literally. As a Necronite, she is one of the population’s rare 2% who can serve as a death replacement agent, dying so others don’t have to. Although each death is different, the result is the same: a life is saved, and Jesse resurrects days later with sore muscles, new scars, and another hole in her memory.

But when Jesse is murdered and becomes the sole suspect in a federal investigation, more than her freedom and sanity are at stake. She must catch the killer herself—or die trying.

Check out our archive of TV, Film, and Literature Reviews here.

Our romance-themed entertainment site is on a mission to help you find the best period dramas, romance movies, TV shows, and books. Other topics include Jane Austen, Classic Hollywood, TV Couples, Fairy Tales, Romantic Living, Romanticism, and more. We’re damsels not in distress fighting for the all-new optimistic Romantic Revolution. Join us and subscribe. For more information, see our About, Old-Fashioned Romance 101, Modern Romanticism 101, and Romantic Living 101.
Pin this article to read later! And make sure to follow us on Pinterest.
By Rebecca Lane on June 10th, 2014