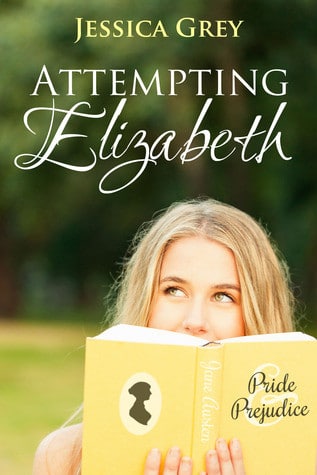 Attempting Elizabeth by Jessica Grey tells the story of a Kelsey who is unlucky in love and can send her consciousness into the pages of her favorite book, Pride and Prejudice. In between trips into the book, she is dealing with a burgeoning romance with Mark in real life. This story fulfills every Jane Austen fan’s fantasy of being in the pages of her books.

Where do I start? This book was not as romantic as I was expecting it to be. Attempting Elizabeth does have a good romance between Kelsey and Mark, but I think it was mainly about finding yourself as Kelsey has issues with accepting who she is. She wants to be like Elizabeth Bennet and that makes her awkward around men. She is also recovering from a bad breakup. Perhaps this made her question herself even more.

Kelsey and Mark start off on the wrong foot as she assumes he is a poor bartender and he turns out to be a teacher. Unfair judgments? Sounds familiar to me. The two go on and off until Mark finds himself in Pride and Prejudice too.

The book gravitates between real-life and Kelsey’s time in the book. It takes her two tries to end up in the body of Elizabeth. She ends up as two other Pride and Prejudice characters at first. Personally, the book would have been even more interesting if she stayed one of those characters. Instead, the whole time Kelsey wants to be Elizabeth. When she finally is Lizzie, she realizes it’s not all it’s cracked up to be. There is a lot of strange mechanics involved in Kelsey living out the novel. I felt like it made the novel drag a bit.

As I stated before, Kelsey had to learn some life lessons in order to find happiness. She had to stop trying to be someone else and be herself. Mark liked her for who she was and it takes almost the whole novel for her to figure it out. I really liked Mark’s character, but it was hard to sympathize with Kelsey. Overall, despite some flaws, Attempting Elizabeth was a good read and I recommend it to Austen lovers.

Our romance-themed entertainment site is on a mission to help you find the best period dramas, romance movies, TV shows, and books. Other topics include Jane Austen, Classic Hollywood, TV Couples, Fairy Tales, Romantic Living, Romanticism, and more. We’re damsels not in distress fighting for the all-new optimistic Romantic Revolution. Join us and subscribe. For more information, see our About, Old-Fashioned Romance 101, Modern Romanticism 101, and Romantic Living 101.
Pin this article to read later! And make sure to follow us on Pinterest.
By Mandi Harris on June 11th, 2015