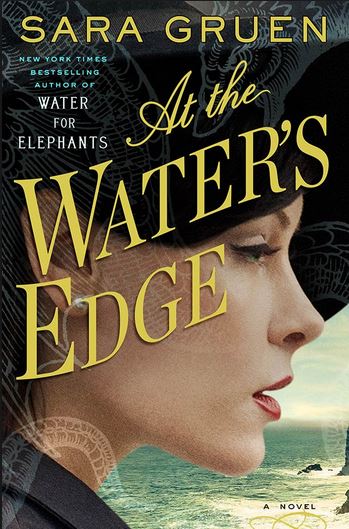 At the Water’s Edge Review

This new release by famed “Water for Elephants” writer Sara Gruen is mesmerizing and so filled with history and adventure that it was nearly impossible to put down. In At the Water’s Edge, Gruen creates a touching and deeply moving love story while shifting focus onto the famed Loch Ness monster, a subject not often written about but could now raise speculation and new adventures.

At The Water’s Edge is set near the end of the Second World War and focuses on a young married couple and their single best friend as they decide to gather fame and fortune by locating and proving the existence of the Loch Ness monster.

Maddie and Ellis Hyde are used to partying and have not had to worry about finances since they wed (as Ellis’ father is a wealthy Colonel who supports them begrudgingly). The father and son are constantly at odds because his son is unable to serve in the war due to colorblindness, which the Colonel considers a poor excuse. Their best friend and faithful companion Hank is also unable to serve and lives comfortably while causing mischief with his friends.

After a brutal argument, the Hydes are cut off for good and panic about what will happen. Maddie’s father cut her off after she married Ellis (he’s already considered a gold digger by her mother-in-law), so she fears becoming an outcast like her late mother.

The men come up with an idea that they hope will redeem themselves for not being able to face the horrors of war and regain his father’s wealth. They will travel to Scotland and hunt the Loch Ness monster; Ellis’ father attempted to prove its existence years earlier and was called a fraud and disgraced. Maddie objects to the idea, since traveling to Europe is dangerous for civilians, but with her marriage already faltering, she sees no other option then to join them on their excursion.

When they arrive at an inn close to where the monster has been sighted before, it’s not long before the men insult and alienate the townsfolk and innkeeper with their drinking, snobbery and boasting, leaving Maddie on her own to face the locals.

This awakens Maddie’s eyes to the harshness and cruelty the war has done and begins to come into her own and discover a strength she never knew she possessed. She also faces some truths about her husband (I won’t spoil what) and discovers secrets that could destroy her whole marriage, while her new friends help her see that new love is never impossible.

The book was so full of rich detail about Scotland that it made me feel like I was there in the book with the explorers searching for monster shaped shadows in the lake. It was a unique and challenging thing to write about during war time, as one would never guess people would go searching for a monster when there was one already terrorizing Europe.

What I loved most was Maddie’s development, and what limitations a woman of her status had in those days and how it took her leaving home to realize how empty her life had become. It also raises questions about her husband’s faithfulness and whether or not he married her for love or if there was other motives behind their union. It all comes together quite shockingly and will have you gripped to your seat until the very last page.

Content Note: There are a couple of graphic sex scenes and some profanity.

“In vain have I struggled. It will not do. My
feelings will not be repressed. You must allow me
to tell you how ardently I admire and love you.”

Our romance-themed entertainment site is on a mission to help you find the best period dramas, romance movies, TV shows, and books. Other topics include Jane Austen, Classic Hollywood, TV Couples, Fairy Tales, Romantic Living, Romanticism, and more. We’re damsels not in distress fighting for the all-new optimistic Romantic Revolution. Join us and subscribe. For more information, see our About, Old-Fashioned Romance 101, Modern Romanticism 101, and Romantic Living 101.
Pin this article to read later! And make sure to follow us on Pinterest.
By Julia McCracken on May 5th, 2015